The Xbox One Microsoft sold us all in 2013 wasn’t really something you could personalize. There were basic personalization features missing and some of them took the better part of a year for the company to deliver. No matter, now it’s possible that your Xbox One console won’t look like a friends.

More specifically, your Xbox One’s interface and profile won’t look anything like mine. You don’t have to take my word for it though. 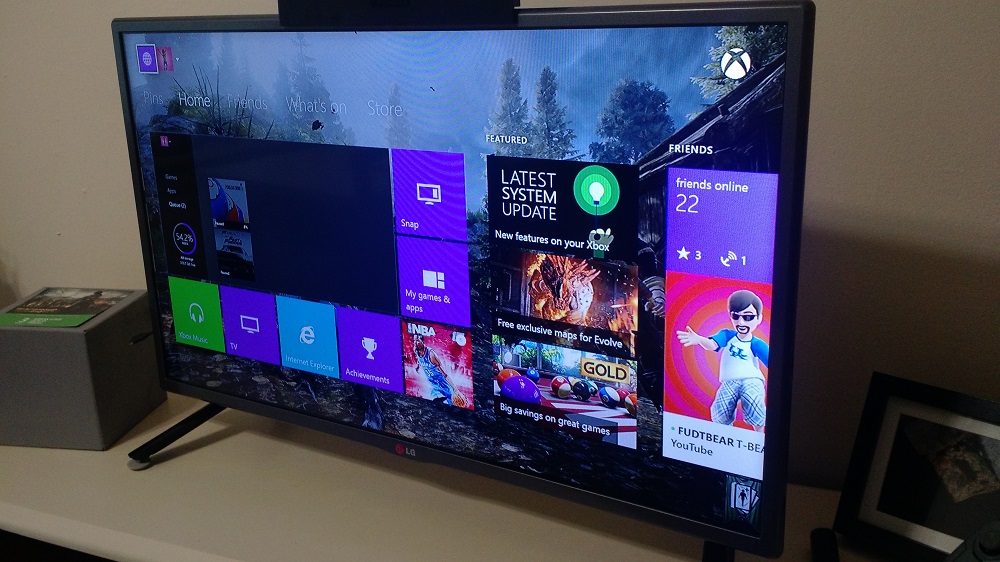 It wasn’t so long ago that the Xbox One Home Screen felt sort of like a giant black pit. In the past few updates, Microsoft added some custom transparency options and the option to assign backgrounds. You can choose a color, but I’m a picture kind of guy. The background is from a Dragon Age: Inquisition achievement. I should note that I use purple as an accent color on just about everything I own from Microsoft. I have a purple Microsoft Surface Pro 3 Touch Cover, which is what spawned this mass of purple. 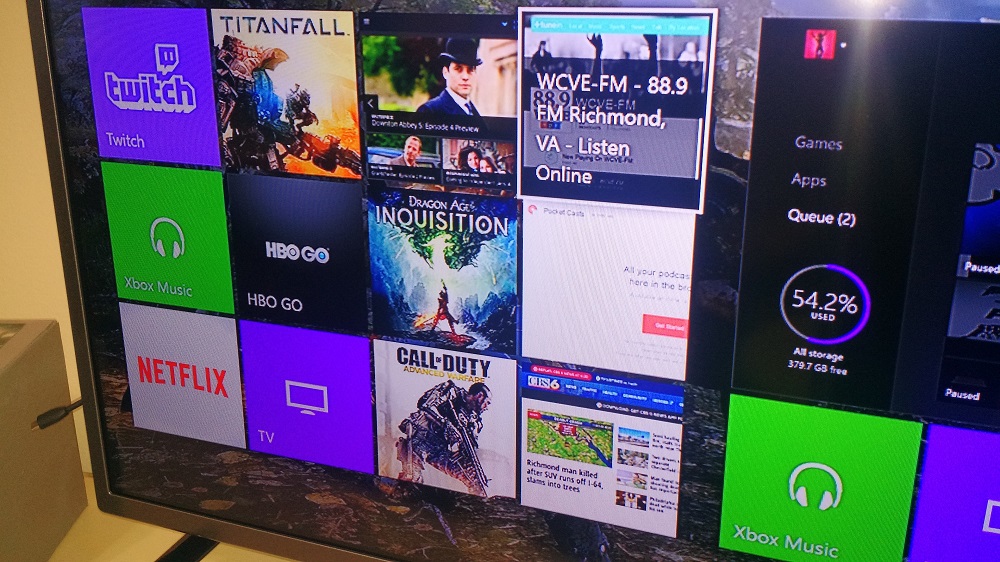 The Xbox One has always allowed you to pin apps and games to your Xbox One Dashboard. Your Pins are like a manifestation of your priorities. Twitch, I love it and I’ve spent a ton of time watching others live stream. I also use Twitch to stream each week’s Play Time session.
The Xbox Music app on Xbox One isn’t exactly the best, but Xbox Music is my music service of choice. HBO Go and Netflix are there because I use them on the regular too. In fact, Nefflix is probably my second most used app on the console. TV is there, because I’m sometimes way too lazy to just say, “Xbox, go to TV.”
My most used app on the Xbox One is Internet Explorer. When I’m writing I listen to a lot of classical music from my local public radio Station, WCVE. There’s no TuneIn app for the Xbox One just yet, so I keep TuneIn’s web app pinned to the Xbox One Home Screen. Flanking it are PBS and Pock Casts, two other web apps aren’t yet available as native apps in the Xbox Store.
For a game to get pinned to my Home Screen it has to be pretty good. Titanfall is my favorite first person shooter and has been on my Home Screen as a pin since it launched. Dragon Age: Inquisition is pinned because it’s the game I’m currently playing. Call of Duty: Advanced Warfare is the next game on my list of things to play. Sometimes I pin videos from the Xbox Store to the Home Screen too, but I haven’t done that in ages since I really dip into that app now. 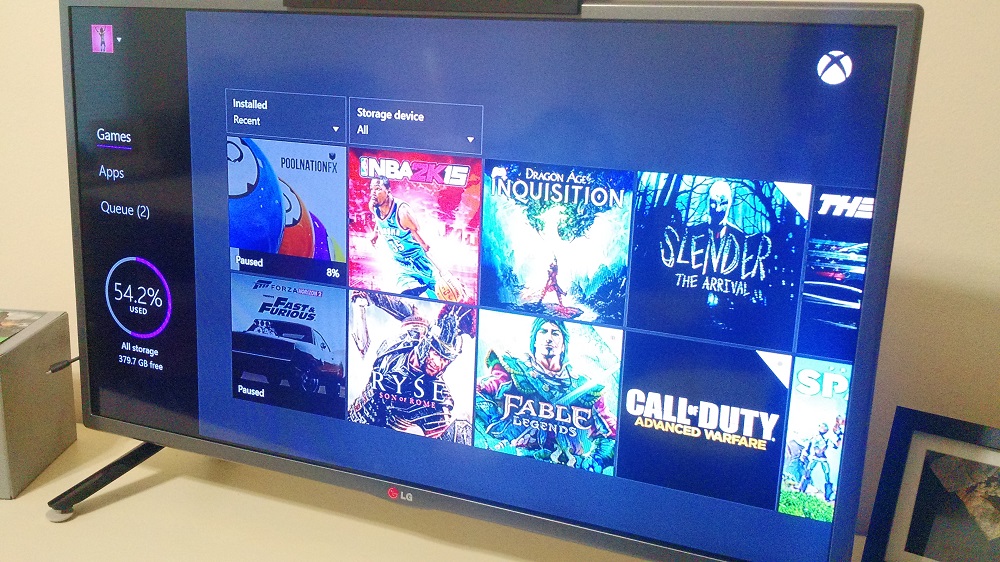 My line up of Xbox One games is pretty extensive, which I find insane because that wasn’t the case for the Xbox 360. I averaged maybe two full-price games a year.
I ran out of room on the Xbox One three months ago. I started compensating for the lack of storage by clearing older games that I didn’t play too much of. Now I have an external 500GB Western Digital Passport that I store everything on. It doesn’t help that I’ve mostly gone completely digital.
I still buy some games on disc. I learned to buy disc copies of sports games after spending $60 on Madden NFL, for example. However, if it’s a game I’m excited about and I’d hate loading often, digital is the way I go.
Loaded on to the personal Xbox One that I have in my office are digital copies of Titanfall, Forza 5, Watch Dogs, Madden NFL 25, Halo: The Master Chief Collection, Xbox Fitness, Project Spark and Dragon Age: Inquisition. I only just downloaded Neverwinter.
I have physical copies of Ryse: Son of Rome and Forza 5, NBA 2K15, Call of Duty: Advanced Warfare, The Crew, Dear Rising 3 and Assassin’s Creed Unity. 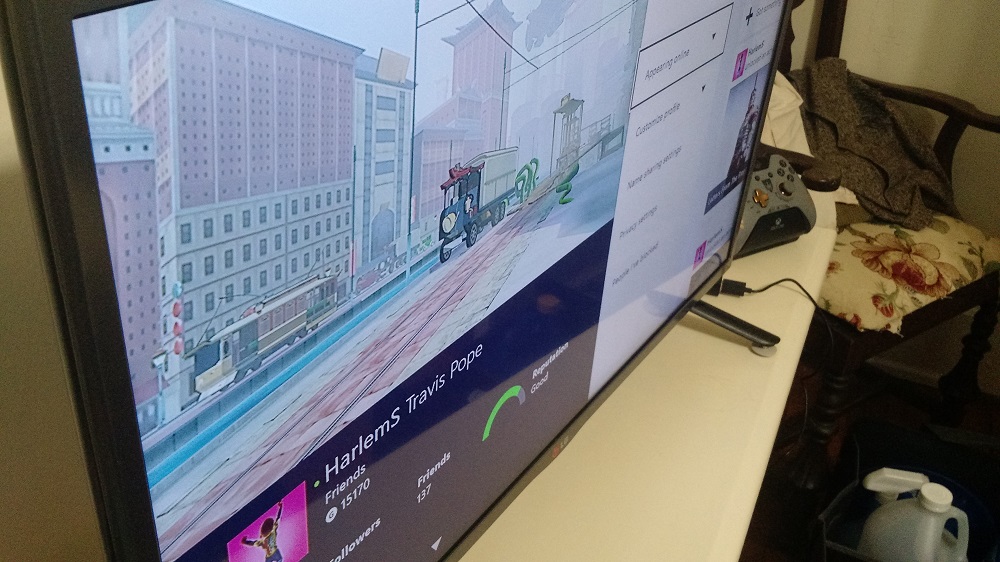 I’m following a few of the different Game Hubs for my favorite titles. Titanfall, Watch Dogs, Neverwinter and Halo: The Master Chief Collection. I’d follow more, but I’m not seeing a lot of benefit from them just yet.
The Showcase area on each Xbox profile is relatively new, but I’ve already took advantage of it too. I reserve the showcase for some of the most difficult achievements I’ve earned. The achievement I got for completing Avatar: Legend of Korra is the first thing in my showcase. The second thing in there is the completion achievement for Assassin’s Creed Unity.

Tell me more about your setups in the comments. I’d love to know what your systems look like.