So it’s Friday night, I’m getting ready to set ZuneSpring.com on autopilot, but before I can, I decide to take a gander at “Switched On: ZuneForSure”. I think you know, Dear Reader, exactly where this is going. Columnist Ross Rubin digs in deep for this week’s edition of his weekly column. He carefully paints a picture of Microsoft wasting time and money to achieve something It had already managed to do before. It’s an interesting read if I do say so myself.

You’ll get no arguments from me about PlaysForSure. It was a branding disaster, allowing hardware manufactures and those interested in creating their own music store, to use Microsoft’s technology to create whatever they saw fit. That would have been fine except for the fact that because there were virtually no hardware limits anything could be PlaysForSure compatible. On top of all that another Microsoft product, Portable Media Center had also essentially the same modus operandi. Ross points to the fact that both of these technologies were starting to catch on a reason they should have been saved however, I think it’s worth noting that Microsoft, and others had already realized that letting manufactures play fast and loose with hardware requirements and music services wasn’t going to get them anywhere. He seems to think that Microsoft should have just been happy with the way things were leaving out the fact that each one of those devices and music stores never stood a snow ball’s chance in hell of catching on. Imagine trying to explain to someone why their Toshiba Gigabeat didn’t work with their Rhapsody downloads, that they purchased inside Windows Media Player. Go ahead Ross, I dare you.

“And so was born Zune, welcoming us to the social with its chunky profile, brown color option, “double shot” facade and the quirky and later abandoned WiFi-based song-squirting sharing feature. Its next major iteration introduced the “squircle” — a rounded square clickable trackpad that surpassed the click wheel just as Apple was gearing up for the game-changing iPod touch: strike two.”

This is one of my favorite parts of the article. I love the incendiary sentence structure, the undertone that Microsoft should have known better then to release a hard drive player with better hardware then the iPod Classic. What Ross fails to mention here is that much like Apple’s iPhone, the iPod Touch caught everyone completely off guard. The second generation Zune devices were already in development at the time, but to believe this guy, Microsoft had to have known that Apple was going to change the game. It was a brilliant move by Apple plain and simple. In 2007 touch screen media players were nearly unheard of.

“Microsoft would try again with the Zune HD, combining a beautiful OLED display, serviceable browser, and innovative touch user interface that would serve as a foundation for the Metro UI being rolled out on Windows Phone 7. Microsoft released a few free apps for the Zune HD, including an auspicious spin on Project Gotham Racing , but even these leaps forward lacked the momentum of apps that the iPod touch was building in tandem with the iPhone.”

However, I think it’s worth noting that Microsoft appears to have never wanted there to be any momentum on applications for the Zune HD, otherwise they would have opened it up to third party development. So wait, Microsoft should have been able to build momentum with the free apps they released even though you and I both know they weren’t even attempting to build an app ecosystem? The shame Ross, the shame. Ironically I see no problem with nearly everything in this paragraph. Microsoft did create a media player with a beautiful OLED display, a browser, and nice interface.

“From there, it was on to Plan D: embedding the Zune software in other devices, starting with Microsoft efforts such as the XBox 360, which was certainly more successful than the service’s cameo on the short-lived Kin. Before the end of the year, though, the Zune service — launched as part of a closed experience that Microsoft created specifically under the premise of eliminating third-party involvement — will debut on Windows Phone 7 devices made by third-party hardware manufacturers. The Zune has come full-squircle.”

The premise wasn’t to eliminate third-party involvement. The premise was to cut out the ridiculous BS that third party developers created using PlayForSure technology. That being said I’ll still accept your way of thinking to be valid. The thing is even though partners will be producing the hardware, with Windows Phone 7, Microsoft has done everything short of putting a gun to manufacture’s heads to keep them from screwing up as they did with PlaysForSure. You call that coming “full-squircle”? I could understand if Microsoft had no restrictions, but come on.

“Meanwhile, on the Zune software’s home platform of Windows, little has changed in terms of Microsoft’s message — or lack thereof — on the reconciliation between Windows Media Player and the Zune software. There have been two major versions of Windows and three major upgrades to the Zune software since the Zune’s inception. But subscription tracks downloaded from Rhapsody or Napster to Go cannot work with the Zune. And Zune Pass content cannot be used with Rhapsody and Napster-compatible MP3 players from SanDisk or Philips, much less Rhapsody-compatible in-home music streaming devices from Sonos and Logitech.” 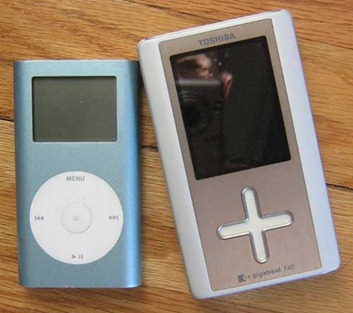 Far be it from me to poke more holes in this but, are you saying Microsoft should go back to allowing you to purchase music in any of five different online stores, and recreating one of the worst parts of the PlayForSure ecosystem? I also don’t believe that creating the Zune Software and Zune Marketplace as a token win. It rivals iTunes on its worst day.

“In contrast, the iPod — the device that caused such ire over its closed nature — can now play MP3 tracks purchased from the Zune music store, and the Zune can play AAC downloads purchased via iTunes. And while no Zune device is yet compatible with Rhapsody, the iPod touch and iPhone are via the Rhapsody app.”

What’s great here is that you left out the part about the same being true for music purchases and Zune. Any MP3 or AAC file from iTunes, and Amazon can be be played back on a Zune HD. I get it though, it’s Microsoft’s fault. Their subscription service should work with other subscription services right? After all it’s their responsibility to boost sales of other’s devices or music store. (Also worth noting is that Rhapsody applications for iTunes was made by, Rhapsody, not Apple, and presently the Zune isn’t open to apps made by other companies.) The problem with subscription music isn’t that all these services don’t work together. It’s my belief and I’m sure the music industry would agree, that the problem is trying to compete with a business model that’s free. Why would a generation of kids hell bent on having music at no cost pay $14.95 a month? Easy, they wouldn’t. Zune could be $4.95 a month, work on any device, and they would still have trouble competing. The people who want unlimited music are fine right now with violating copyright law. Do I agree with them? No. But seriously, cut the crap.

“Given that third-party hardware is so important to the future of the Zune service, though, Microsoft likely could have realized many of the Zune’s token wins — and avoided fragmenting a subscription service landscape already facing a challenging proposition — had it called upon its vaunted tenacity and simply renamed and simplified PlaysForSure.”

So it’s Microsoft’s job to protect all subscription services? I don’t think so. It’s Microsoft’s responsibility to put the best product together that does interesting things. Renaming PlaysForSure, would have been a disaster and what’s more is you most likely would have called them on it had they tried it. By the way, anyone who calls building an ecosystem that covers software, your browser, the XBOX 360, and a device a token win has either never coded, or had anyone explain to them how much works goes into it.

I know these kinds of articles are childish but since no one else stepped up to the beating I’ll be happy to. Mr. Rubin here would have been perfectly fine in saying that Microsoft hasn’t innovated enough, or that if they had simply integrated their ecosystem a long time ago they would be in a much better market position. However that’s not what he said.  If Microsoft had just renamed PlaysForSure, would he have stayed away from it like the rest of the world’s sane population? I think so. In no way do I have a problem with legitimate Zune bashing. Say that it doesn’t do what you need it to. Say that it should have had integration with other Microsoft services and software from the beginning. Say that its lack of marketing is as frustrating as attempting to locate the Yeti. Whatever you say, please don’t attempt to justify it with any core premise involving how the service hasn’t made progress, or how PlaysForSure was better. Every time you do I’ll be here with a laptop, a Toshiba Gigabeat, a generation one Zune, and common sense, to make fun of you.