Microsoft’s Zune Pass has had a banner year in terms of exposure; in fact I would go so far as to say “Zune Pass” has been written more places, more times than ever before. I’m equally sure Windows Phone, and the XBOX 360 will expose it to people who have never heard of the service. This is a good starting point to reenergize the fan base, and convert even more people to subscription music. No doubt for most people the thought of streaming music for free on their favorite devices without having to first download them will be the service’s most appealing feature. However I have started to wonder just how realistic the idea of a cloud music service has been implemented by Microsoft wit Zune Pass. 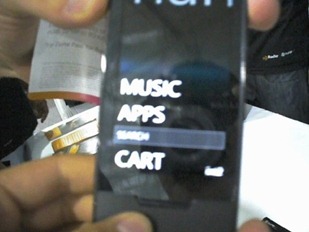 The Search field on Zune Devices is one of the few ways to get to specific artists that you already like.
Let’s take your personal collection as an example. For a service that boasts millions of streaming songs being sent to you from a server somewhere; I find it ironic that there’s no sense of me actually having my library in the cloud. I can go to the marketplace on any Zune device, search an artist, then choose to play a song or album by them. That’s all fine and dandy but since the service keeps track of every play that, why not give me a listing of artists I’ve already listened to on each Zune device? Why can’t my XBOX 360 already know what Zune Pass media I’ve downloaded onto my Zune HD and have it ready for me? Why not be able to use Zune.net and instantly have a ‘by artist’ view just like the Zune software?

Accessibility is another problem for the play anywhere strategy. The idea is that I won’t need to download anything; I can just let the service be my juke box. That’s all fine and dandy, except for those who don’t have the privilege of getting their hands on a Windows Phone device will be left out of that dream unless their near Wi-Fi. To make matters worse those who have Zune 120 or older can’t access public Wi-Fi due to that device’s lack of a browser. To me that makes for a very fragmented experience. If you are an older Zune user the cloud strategy is nearly useless to you, and if you’re a Windows Phone or Kin user it’s nearly perfect. Well almost (we’ll get to that one in a second).

Lastly, is it just me or is the streaming quality on portable Zune devices a little lack luster? I couldn’t find any documentation on streaming bit rate suffice to say, I’m pretty sure it isn’t of the CD quality variety. True music fans; you know the ones who Zune targets; aren’t going to be too keen on hearing low bit rate music on those shiny new Windows Phones. Of course that also presents another issue. Wi-Fi while not everywhere you are; does have a significant advantage over its mobile counterpart, broadband internet has no data limit. By attempting to up any quality in Zune Pass streaming Microsoft could end up eating into a lot more of Windows Pone 7 user’s monthly data allowance.

I like where Microsoft is going with Zune Pass, and streaming. I think it’s clearly were the market is headed and I can’t wait to see how they work out some of the issues. I know nothing about media distribution or running a company. One thing I do know is how I think my Zune Pass experience could be better. To me these aren’t just logical steps; it’s what needs to be done to make Zune Pass a viable cloud alternative to MP3 Music stores.