I didn’t realize it when it started, but Monday would be the first day of a four-day tech high for me. Maybe you don’t know what a tech high is, but you’ve probably experienced one. It happens when all the stars align just right. You’re researching something cool that you were only mildly interested in. Then, as if you’re returning to a police station to claim a bag of money that no one else did, you get excited. Your heart flutters. You realize that the piece of tech you’re looking at could change everything. Last Monday I purchased the Samsung Gear S3 Frontier.

I should add some context here. I don’t encounter the “next big thing” a lot. I caught the smartphone and cloud storage crazes. I was one of the first to be on Zune Pass. That’s been it for me. Maybe you could count the Surface Pro in this, but I don’t. I thought the first two incarnations just didn’t make sense. Some days I still get the urge to buy an iPad Pro.

Smartwatches continue to defy logic to me. I understand why people have them. They don’t want to have to pull out the phone in their pocket for everything little thing. They want to avoid distractions and keep their eyes and minds on the task at hand with little interruption. What they’re after is freedom. All of these things I can get behind. Problem is, why do I want something else to charge besides my Bluetooth headphones and my phone? 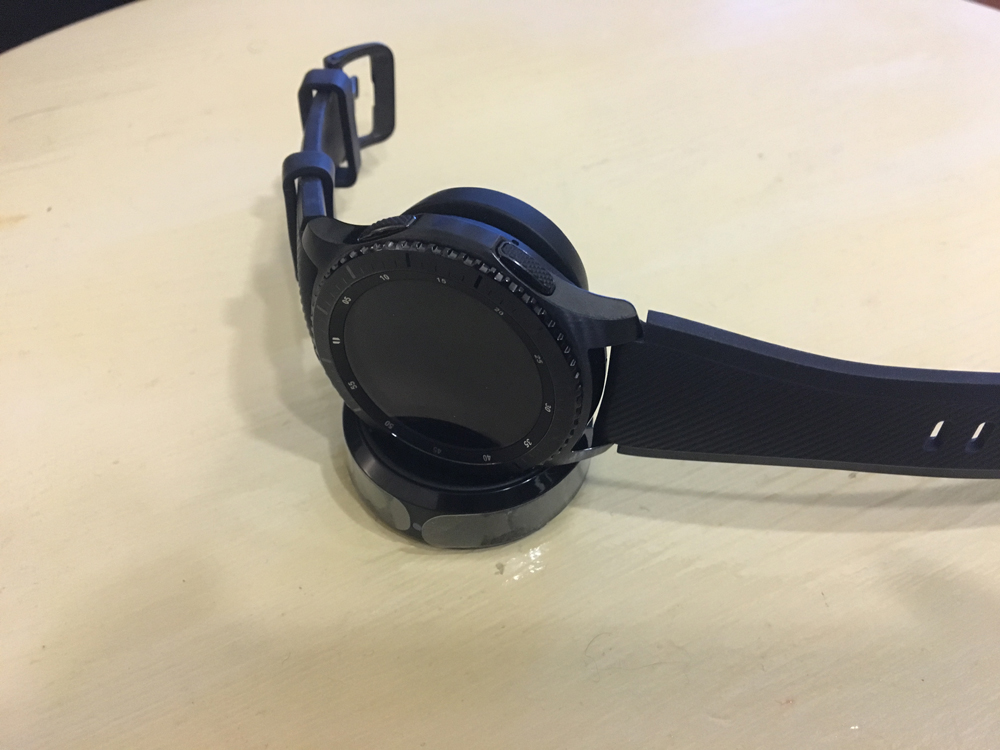 I purchased the Samsung Gear S3 Frontier from my local T-Mobile Store because it had LTE radios. You see, while I think a smartwatch companion device isn’t a compelling product, a device that can free me from my smartphone is a good idea. As I was in the middle of deciding on my next phone anyway, I took the plunge and dropped $400 cash on the device.

Last night I returned it.

I knew that I was wading into uncharted territory by trying to replace a smartphone with a smartwatch equipped with LTE. That’s why I kept my iPhone 6S powered up in a drawer on a separate line. When leaving the house, I’d only carry the Samsung Gear S3 Frontier and have it automatically switch into its separate phone and messaging mode. When home, the watch would sync to the iPhone for contacts and mail updates. I’d keep it hidden away in a drawer.

Samsung may be great at mimicking everything that the iPhone does, but it’s not great at writing software that runs on the actual iPhone. For the first day in and out of my office, I carried the iPhone in my pocket and wore the Gear S3. Too frequently, it’d lose its connection. So it was time to fly with the Gear S3 Frontier solo. 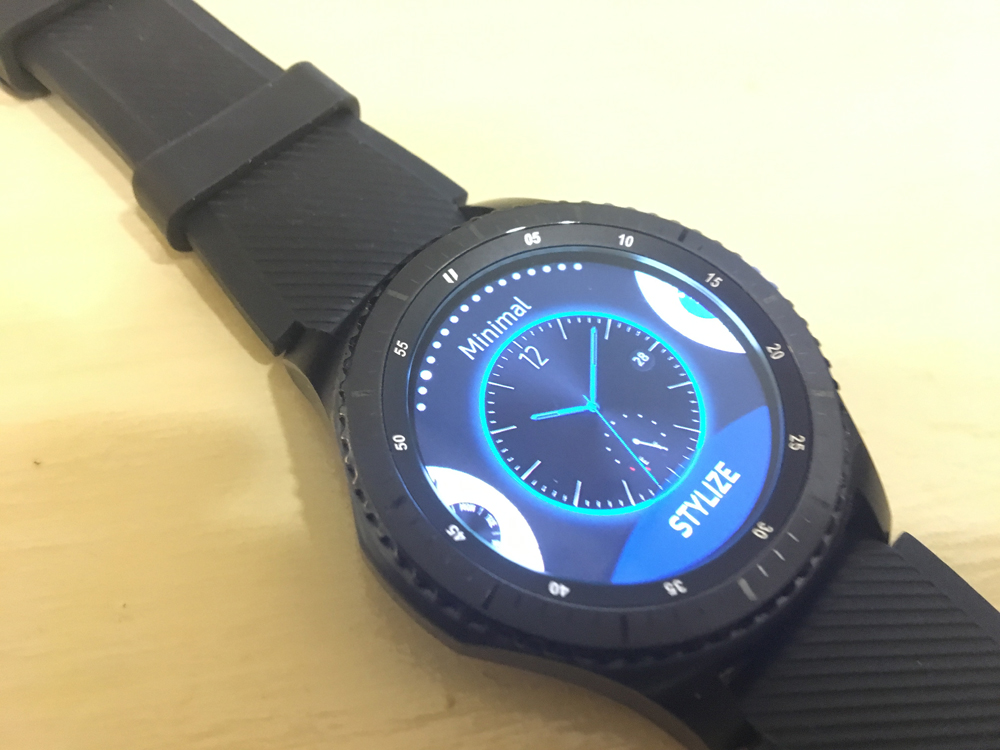 I researched the Gear S3 the weekend before I spent any money on it, but it wasn’t until scrolling around a Gear forum did I discover that I couldn’t see Samsung Pay because it wasn’t available on the Gear S3 when paired with an iPhone. So I powered on an Android device I had on standby and linked it to that phone. Samsung Pay, which is seriously the coolest thing about this watch, did finally work. I paid at a few places with just it to make sure. A few more apps, these of actual quality, appeared too.

But so much more was missing.

But so much more was missing. The Samsung Gear S3 Frontier relies on Tizen OS, which is just not finished in some important areas. The operating system allows the device to last a long time – I only charged one during my time with it – but boy is its app situation a crime. It’s not just that there’s very little to download. The stuff that is available is sometimes locked to Samsung users. That explained why I could find Uber the day before.

iHeartRadio, required me to be tethered to my phone. In fact, most of the apps in the Gear store do. That’s despite my Gear S3 Frontier having an internet connection and phone number of its own. I hear folks talking about the albatross that is the Windows Store on mobile devices, but the Gear Store is drier than baked chicken made by some poor dope trying to impress their girlfriend. I’m speaking from personal experience. I can’t cook. Now all my friends know. 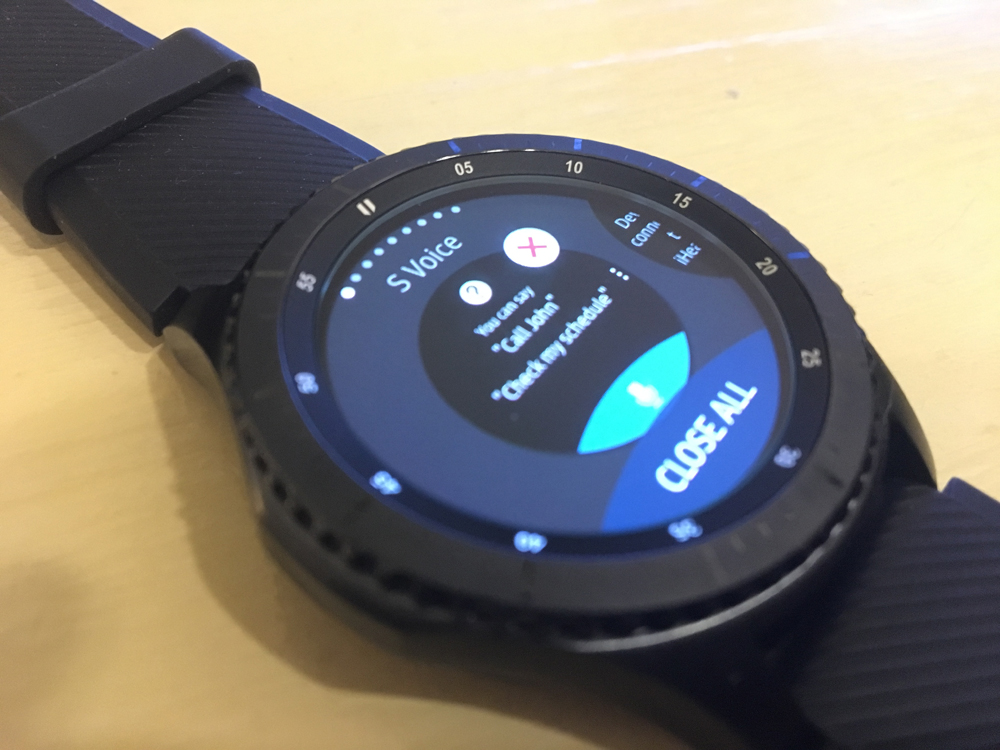 The kicker was the Bluetooth though. Despite having a Bluetooth radio, the Gear S3 Frontier couldn’t connect to my car stereo. If I can’t bump One More Chance, Rodeo and podcasts with this thing while I drive, the beta test is over.

And still, after all of this, I didn’t want the Samsung Gear S3 Frontier go back. I loved the hardware and interface. The ability to change its watch bands? A must have for any device of this type. I loved its AMOLED screen. I enjoyed its precision dial. Have I mentioned Samsung Pay?

Remember when everyone told you subscription music was crazy?

The Samsung Gear S3 Frontier is the closest I’ve come in a long time to that feeling that Zune and Xbox gave me when they were first starting out. Both were underdogs in an unforgiving world of people set in their ways. Remember when everyone told you subscription music was crazy?

People who worked on the product seemed to understand the segment and what people wanted more than Apple and other big players do. Smartwatches as companions are cool, but they’ll never sell as much as smartphones until companies realize the true genius of the smartwatch is freedom. Freedom from a cased slab of glass that’s always in your pocket. Freedom from pulling out your wallet. Samsung’s product team seems to get that, even if they can’t yet deliver the software experience that makes that all possible.

In the end, I chose to take the Gear S3 Frontier back because it still felt raw. I promised myself I’d never ride out an early waves of a product after Zune. I’ve managed to keep that promise.

Three days I lived in the future.

For three days. Three days I lived in the future. I texted, did some light browsing and listened to music on a damn watch. I paid for things I didn’t need like I was Merlin.

I have returned from the future, and damn was it awesome.