There can be no questioning it, Windows 8 completely changes the relationship between apps, app users, and the underlying platform. In The 8 Equation: A New Kind of App Part One we talked about those changes in detail.

In case you missed it, let’s review. Modern Windows apps will always use ‘Charms’ for things like search, settings, and sharing. These apps will only run in a fullscreen mode and minimized mode snapped to the left or right of your screen. When not in use they will be able to still run tasks in the background while not significantly impacting your device’s performance or better life. They’ll possibly even work on every time of device running Windows from x86 and x64 bit laptops, desktops, and tablets to ARM powered tablets, desktops, and laptops running Windows. You will be able to pay once and download them on up to five of your Windows devices, and they’ll only be available from Microsoft’s new Windows Store. Each change by itself is small, but only after you’ve experimented with all at one time can you understand what Windows 8 really means for everyday users. Luckily dear reader. I’ve been doing all of the experimenting for you.

After running Windows 8 in some form since last September and full time since March 1st, I can confirm that any user of Windows 8 will – and I don’t say this lightly, be completely confused when first using Windows 8. Ironically the confusion won’t come from the sea of changes but from a complete and utter lack of Microsoft providing any sort of adequate tutorial on things like Charms and the new Tasks area – and no. the provided downright half-ass tutorial isn’t going to help matters. Yes, every function is easily discoverable, but how long do you expect your less savvy users to play around discovering features before they decide Windows 8 is “The worst version of Windows ever.”? 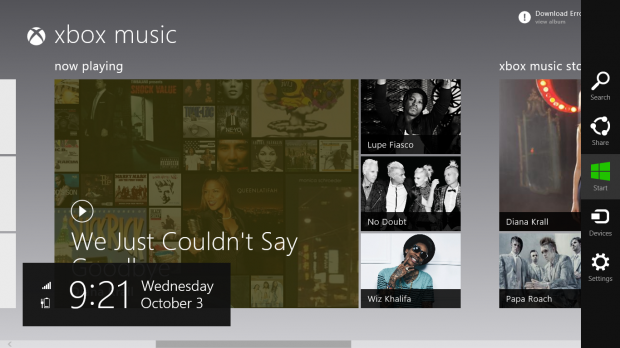 The Charms Bar in Xbox Music on Windows (on the right).

All of that being said there is a perfectly valid counter argument for those same users not needing a tutorial on things like how to close a Modern app, or Save since Microsoft has intentionally engineered Windows 8 in a way that neither are necessary. Fair enough.

The applications themselves are, when done correctly absolutely incredible. While their relatively flat design makes them look simple, applications like Readiculous and Microsoft’s own OneNote MX show what can happen when a developer actually takes the time to use the tools and documentation provided correctly. In fact it’s my opinion that Modern apps can be just as powerful and attractive if not more powerful and attractive then their desktop counterparts. You don’t need to take my word for it though. Here’s a mockup of the lineup on my one and only computer, A Dell Vostro v13 which I’ve named Carrier (So named because I use it to deliver packages of knowledge on Microsoft’s ecosystem.  Get it? Yeah I’m a loser).

Whether you’ll find Modern apps to be replacements for traditional Desktop apps depends on the task at hand. I’ve yet to find an entertainment app that I couldn’t easily replace with the functionality and styling of a Modern app. That isn’t to say that Metro applications are as fully featured as their Desktop counterparts, after all this is a new platform. With all of the hours I’ve logged using Windows 8’s Modern apps I have come to the conclusion that right now it’s strictly a “Desktop = Work and Modern apps = Fun scenario” without question. This can, and I suspect will change over time if Microsoft’s OneNote MX is any indication.

In Use and on Deck

In daily use the things that make Metro apps unique have mostly resulted in a better user experience for in my opinion. In the Developer Preview of Windows 8, the only way to close an application was to right click on the screenshot of it in the Tasks area on the left of your screen. Starting in the Windows 8 Consumer Preview users can close a Modern app simply by grabbing the top of the app with your finger or mouse and dragging it to the bottom of your screen. I find it to be mentally satisfying – although I can really explain why that’s the case.

I’ve also found the installation behaviors of Modern apps in general to be more mentally satisfying their desktop counterparts in so far as I don’t have to worry about the things I typically worry about when downloading software. There are no random toolbars piggy-backing on any software. I call that progress.

Really there’s only one thing I don’t like about Modern Windows apps and that’s App bars.  App bars are small toolbars that house features that would have cluttered a Modern apps interface, but don’t belong in the Charms bar under settings. To trigger the app bar you’ve either got to drag from the bottom of the screen via touch, or right click using a mouse. So far I’ve found that applications that use them have a knack for putting essential options there. For example in Xbox Music, the only playback control available outside of it’s app bar is ‘play’. Really the problem is that in no way does the tutorial provided with Windows 8 or any of the applications I tried indicate that this bar is there and houses additional options. Without that how would anyone know to right click or pull from the bottom of their screen? They wouldn’t and I suspect, they won’t know without having to be told explicitly. In my opinion that wreaks of bad design.

It’s my belief that the Modern Windows applications will become more feature filled and plentiful over time.  I’ve no reservations about recommending that my friends and family use Modern applications when they make the switch somewhere down the road – they are too secure, readily available, and potentially feature filled not to. Modern apps work just as well on touch screens as they do with keyboards and mice. That’s worth it in itself. These apps are going to be where all the action is going forward.

We have a few more editions of The 8 Equation left in us before the mass hysteria of October’s Microsoft announcements and releases take hold, so keep your browser, Modern or otherwise on enConnected. The fun is just Starting.

One Comment on “The 8 Equation: A New Kind of App – Part Two”