Think back to your first experience with a computer running Windows. Chances are what you remember most about your personal computer or really any consumer device, is its physical characteristics. How did you interact with it? Was it intuitive?  Do you feel that you were using the best hardware for the task you wanted to complete?

In Windows 8, the dynamic between you, the hardware you are interacting with, and the applications and games you want to play, are unlimited. If you feel a keyboard and mouse are you thing that’s fine, use them. Do you want to curl up with a nice novel downloaded from the Kindle Store? Break out your Windows 8 powered tablet and have at it. The future of Windows is what you want it to be.

To take advantage of this Microsoft and its partners are unleashing a barrage of new devices, traditional and otherwise, perfectly designed to be what you want and do what your Windows-powered computer today can’t.

Tablets. Everyone remembers where they were the first time someone mentioned that Apple’s iPad would usher in a new generation of computer form factors, particularly those who scoffed at those making the prediction. A few years, and millions of iPads later the form factor is poised be the successor to the both the laptop and desktop form factors. Here’s a look at the hardware Microsoft and its partners think you’ll want to buy apps and play games on sometime in the near future.

Take a tablet add a keyboard dock and call it the next generation of computing. Sure, it’s not an altogether new take on mobile computing but we’ve seen worse come from the personal computing industry. Still it’s a little overwhelming to see the sheer amount of companies who have decided to focus on Tablet + Keyboard dock scenarios including Dell’s XPS 10, Samsung’s ATIV smart pc, and the very impressive Lenovo ThinkPad Tablet 2 with an Intel Atom Processor.

Aside from its admittedly awkward name Dell’s first bold step in the direction of converged portable devices is actually a rehash of a previous product the company introduced the Netbook’s reign as top mobile warrior. The Dell XPS Duo 12 is for all reasonable purposes a traditional 12” laptop with a modern Intel i7 processor that is until you want to get in on some touch action. The laptop’s screen actually rotates inside of its metal frame and rest on top of the keyboard and mouse pad, effectively turning itself into a slightly thick but powerful 12” tablet with multi-touch.

Equally ambitious is Lenovo’s absolutely genius IdeaPad Yoga, a full laptop with a screen that folds back and onto its own undercarriage but with a full Intel i7 similar to the XPS Duo, it’s a one stop shop for any task you might need it for. 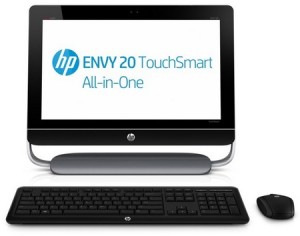 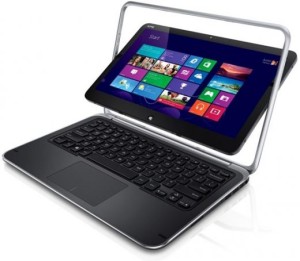 [/one_third] [two_third_last]Traditionally you’ll hear the most about Windows 8 powered tablets. That’s to be expected, after all it’s one the form factor that proved touch to be a new interface paradigm worth rallying around. There’s only one problem with the touch and it’s a problem particular to the oldest form of consumer computing: desktops. Unlike smartphones and tablets, the consumers don’t seem to be sold on the idea of touching their monitors at home. This time around Microsoft’s OEMs seem to be addressing the lack of enthusiasm for touch by trying to fill the gap with touch-enabled all-in-ones – desktop computers with no separate monitor, tower, and speakers. The HP Spectre One, stands out as an absolutely amazing ambassador for the category but with no way to adjust the position of the screen and a price tag of $1299, we’re still not completely sold on it. While not as fancy as its older brother the HP Envy 20 TouchSmart will deliver much of the same functions to a more wallet-conscious audience at $799. Our favorite so without a doubt is Lenovo’s IdeaCentre A520. A 23” display, Intel Core i3 processor, and best of all, the display folds flat so that you can use that ten-finger multitouch screen comfortably. Also at $999, The IdeaCentre A520 is also a relative bargain.[/two_third_last]

Microsoft and its partners are planning on delivering Windows 8 on whatever form factor you prefer. Now, if they could get together on the applications situation.