I’ve been using a Windows Phone since the original Samsung Focus became available on AT&T. I loved the way it worked from the first time I used it. The metro/modern/whatever we call it now design just made sense. So when I saw the first shots of what would become Windows 8, I got excited. I gave it a test spin with the developer preview, then started using it full time with the consumer preview.

When Microsoft announced the Surface RT and Surface Pro, I originally thought I’d get the RT when it was released and then get the Pro for the full Windows experience. It didn’t take long for me to change my mind about getting the Pro. My Surface RT does very nearly everything I need on a daily basis. There are, of course, some tasks that I need a PC for. I use Quicken to track my wife’s and my personal finances. I play Dungeons & Dragons Online (DDO), which doesn’t have a Windows RT client. And of course, I’m developing apps for Windows 8 which requires Visual Studio.

The Windows RT Remote Desktop app works great for those times when I need to use Quicken but don’t want to sit down in my office to use it. I haven’t used Remote Desktop to do app development because the Surface’s screen isn’t really big enough for that  — I have my Vista-era laptop (upgraded to Windows 8) attached to a large full HD display and don’t like to use Visual Studio at anything less than 1920×1080 because it just feels too cramped. I also haven’t tried running DDO via Remote Desktop because that’d just be insane. It runs poorly enough on my creaky laptop — adding RD into the mix would probably make the game unplayable.

I have the 64GB Surface RT and have added a 64GB microSD card to it, performing the magic to allow me to add directories on the card to libraries. Being a release day 64GB unit, it came with the black Touch Cover. 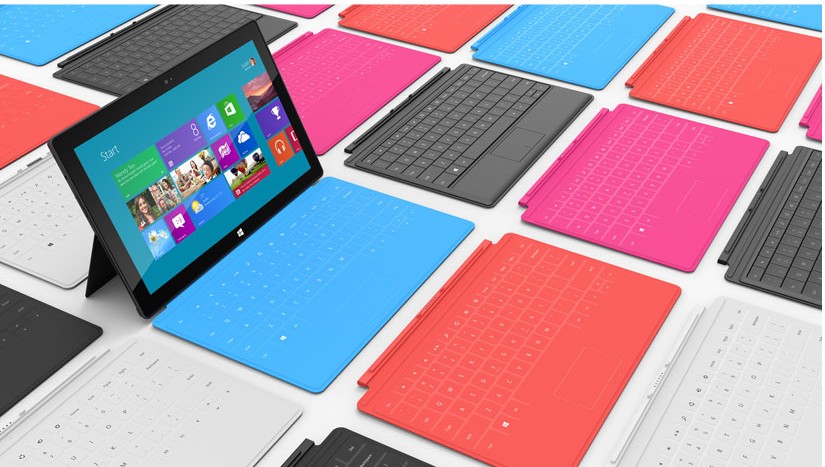 The Surface RT flanked by the Type Cover and Touch Covers in varying shades of color.

I love the way this thing works. Windows RT is fast and responsive and is a delight to work with, especially with the touch screen. I truly don’t feel like I’m missing anything when I’m using it as a “mortal” rather than as a developer. And, as a developer, I use my Surface as a companion tool — for taking notes and getting ideas down, and for testing my apps on Windows RT and with a touch screen.

Of the apps shipped with the OS, I regularly use Mail (I’m typing this email on my Surface using Mail), Calendar, Bing, SkyDrive, Internet Explorer (the immersive version more than the desktop version), Xbox Music and Xbox Video. I also use Word, Excel, and OneNote (both the desktop and Windows Store versions).

I’m pretty satisfied with the Mail and Calendar experience, though the loss of the ability to have my Google calendar on there has hurt. As a matter of fact, it caused me to move one hosted email/calendar from Google apps to Outlook.com. My other domain, the personal one, will be moved at a later date, as I have to make sure my family’s stuff all gets moved and they’re able to use it.

The Xbox Music and Video apps have improved since the initial release, but they still have a way to go. I feel like cloud syncing is still flakey and I really want to see an option to default to the unedited versions of albums/songs when syncing.

By and large, I’ve been pretty happy with the app market. If I need it, I’ve been able to find it for the most part. The one thing I haven’t found is a decent social media aggregator (think Windows Phone’s People hub). The People app doesn’t work well enough in that regard — it pulls in my Facebook and Twitter feeds, but likes to stop me while I’m looking through them to take me back to the beginning. Frankly, the Windows Phone People hub is still the best way I’ve found to pull Facebook and Twitter together.

Internet Explorer works quite well for me. I’m not really sure what else to say about it. It’s a browser. It displays all of the pages I need and does it quickly. I wish people would stop the uninformed bashing of IE. Back in the IE6 and even IE7 days, it was justified but 8, 9, and 10 have all been huge improvements.

My Surface goes nearly everywhere with me. I’ve used it to keep score at my oldest granddaughter’s softball games (though I haven’t done that much because it’s easier just to watch the games and cheer!). I bring it with me on Wednesday evenings to church where I use it to help me track kids’ achievements in our weekly TeamKid sessions.

Read other editions of Town Square

One Comment on “Town Square: The Surface RT a Year Later”