I may always be a nightmare customer for television networks. I find network cash cows like “Jersey Shore” to be an abomination of sorts, a finger in the eye of what television was made to do. Aside from my huge objections to content on television I also have a problem with it’s business model. In my admittedly short existence I’ve never once pondered the thought of rearranging my life in order to watch a television show. I don’t buy DVDs of my favorite shows to watch them all in sequential order. I won’t be suckered into paying half of the amount of money I spend on food every month to rent a cable box and sign up for some two year service agreement with Comcast. In fact to be perfectly honest if the cable companies were an NBA player playing opposite of me I’d elbow them in the face and make sure the referees saw it. I remember using Hulu for the first time and thinking “All of my dreams have come true”. Sadly If Hulu is the stuff of my sweet dreams, then Hulu Plus for Xbox 360 is the stuff of nightmares.

Part One: Hulu Plus on Xbox

Ever since Hulu Plus for Xbox was announced at the Electronic Entertainment Expo last year, I’ve wondered about what form the interface would take. I envisioned something close to Zune where you could browse content and also use all the features that make Hulu on the web so entertaining. For the most part the features you would expect are there. You’ve got your overview of each show, clips, related shows, and queue management. I would like to see the ability to read reviews, but that’s a minor issue that I suspect no one else will complain about. There also seems to be a real lack of imagination in the way it’s implemented. For example late last year Microsoft added the ability watch Netflix videos and Zune videos with others in a party as long as they either already on the content, or have a Netflix subscription. Now I don’t live in an imaginary world so I suppose content owners for Hulu may not have been down with this, but Xbox Live and all of it’s other services are a social experience, and that to me would sound like a win for getting more people interested in what their friends are watching on cable networks. It’s worth noting that Hulu Plus on Xbox does boast a feature no other company can come close to offering: Kinect support. Sure there’s no “Xbox play 30 Rock” or anything going on just yet but I’m sure voice playback with Kinect beats the hell out of navigating the system with a controller.

Part Two: Hulu Plus the Service

While Hulu Plus on Xbox’s user interface, presentation, and functionality make it a top contender for the digital streaming crown, Hulu Plus itself, I’m sad to say, is a cruel joke. Let’s start off with the basics. For $7.99 a month you can stream entire seasons of your favorite shows to more then just your computer but also your Xbox, and other devices. Brilliant right? Wrong. There’s a skeleton that lurks behind the closet door. While browsing I noticed that my favorite shows while available on Hulu were in fact not showing up in Hulu Plus on Xbox. At first I thought nothing of it, brushing it off until finally I had to ask the twitterverse if I they too had noticed this. To my surprise I received a reply from @HuluSupport.

In essence, Hulu Plus is treated like a separate service from Hulu.com, creating a world in which strange things happen that should never be allowed by a video content service with multiple points of entry. For example National Geographic is available on Hulu.com free of charge. No payment necessary. However if I were to decide to pay for Hulu Plus and watch it with Hulu Plus on Xbox 360 it could very well not be available. To make matters even crazier there are some Hulu Plus shows that are only available via Hulu.com even with a Hulu Plus subscription. It’s fragmentation at it’s worst.

There’s also philosophical issues that you have to grapple with before ponying up the subscription fee. At it’s very core you are actually paying to watch something on your television that you could very easily watch on your PC via Hulu.com for free, and you are paying to watch ads. Sure it’s only thirty-seconds every 15 minutes or so but it’s still ads.

I’ll get right to bottom line here. Hulu Plus on Xbox is a great app for anyone looking to cut their cable subscription. While it doesn’t offer many features it’s ease of navigation, fluid streaming, and Kinect support make it something every Xbox user should try. For my viewing habits and what I expect out of a service I pay for vs. what I can get for free Hulu Plus’ fragmentation, lack of networks outside of a core group, to say nothing of paying almost entirely for the ability to watch it on “various devices” when you can’t watch a large portion of Hulu.com’s free stuff free content as well a big disappointment for me. When Hulu Plus was announced to be on it’s way to the Xbox 360 I thought it was the content play I dreamed of. Instead I’m entirely convinced that this is the stuff television lovers have nightmares about. 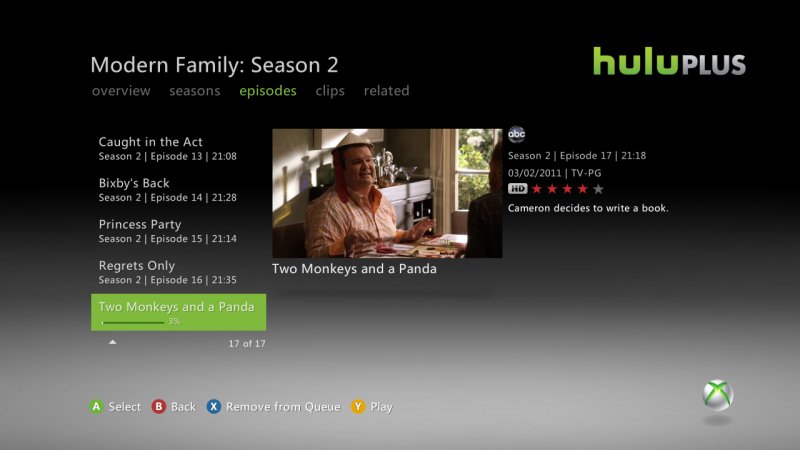