The wait is finally over, the Zune Software has officially taken its rightful place as the default media player in Microsoft’s Windows Operating system. Sure, the Zune Software as we know it had to be broken up into media types, stripped of its podcast compatibility and rebranded as Xbox Music but it’s the destination the matters to us in Zune’s case. Microsoft seems to finally have taken it seriously, users rejoice. You could also cry, -it depends on your point of view.

Let’s get one thing straight right now, if you’re no fan of Microsoft’s Metro style guidelines, Xbox Music isn’t going to change your mind one bit –in fact it may help you fortify your position. When first opening the application you’re dropped right into your now playing screen. There you are able to quickly get a jam session going with options for playing a particular artist, Smart DJ playlist, or a managed playlist directly. To your right you’ll find a view of your recently played artists and albums as well as a button to play all of your content in shuffle mode. 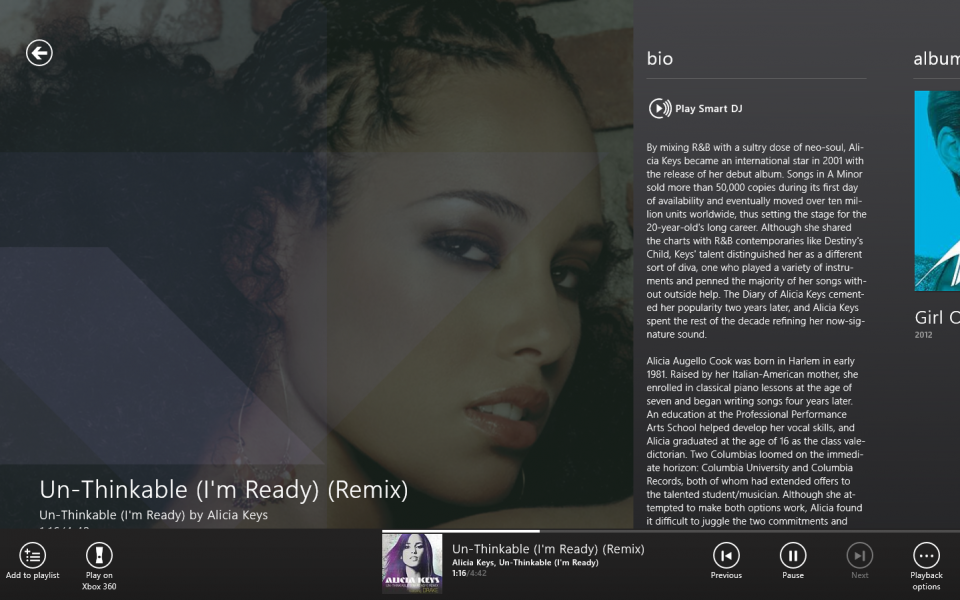 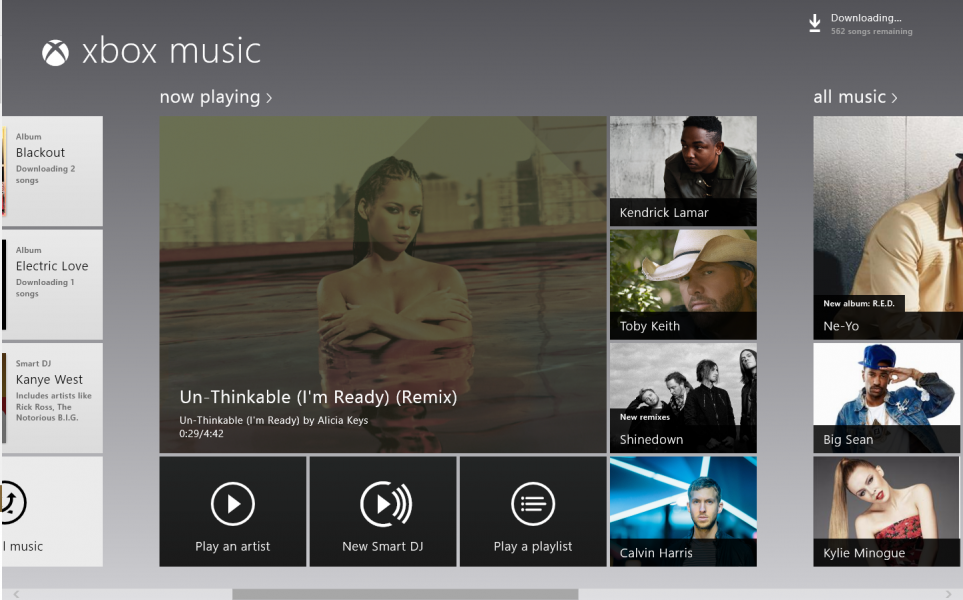 When, clicked or tapped the “my music” header will take you to an on-high level view of your entirely library whether it be content stored local in your device’s Music Library or on Microsoft’s servers if you’ve either purchased content from the service and it’s past incarnation or have an Xbox Music Pass. Content sorting is handled by a drop down menu with options for album, alphabetical, and chronological order.

Once you’ve found a particular album or song you like, clicking or tapping on it will bring up options to immediately play it, add it to your collection or playlist and, in some cases explore the artist. Playing anything will launch an app bar with more options to add the content to a playlist, purchase it for your collection, give you playback controls or go to the newly redesigned now playing screen. There’s also a fancy new ‘play on Xbox 360’ option that we’ll get into a little later.

Speaking of local content, Xbox Music by default will find the metadata for your music files no questions asked.

Xbox Music’s Store renders in exactly the same manner as your local collection does, treating Microsoft’s entire 30 million song music library as if it’s your own, provide that you’ve signed up for Xbox Music Pass or are using the 10 free hours of streaming for Windows 8, Windows RT, and Windows Phone users.  This as it turns out is both good and bad.

Having to relearn an entire interface is one thing and seeing as how Xbox Music itself is already a huge change, we could understand why Microsoft choose to have both the Store and local music collection mirror each other in browsing. It just makes sense, or so we thought. In actual practice this design is unapologetically unintuitive. Instead of each genre being treated as a small section of the larger store, each genre is only treated to a drop down menu that has ‘featured’, ‘new releases’, and ‘top’ as options. It feels wrong. In the Zune Software each genre’s homepage featured playlists, and specialized content for just that genre along with those new releases. We’d love to see that make a return in a future update. The sooner, the better.

As long as we’re on the topic of things returning, Zune Software and iTunes users will be disappointed by the complete lack of media management of any kind here. Has the aforementioned automatic metadata syncing screwed up the information on a few of your favorite songs? Tough noogies, there’s no option to change it back from within the app. Want to make a playlist that auto populates when given a set criteria? No dice. Did you not like the Zune Software’s ‘heart’ vs. ‘broken heart’ ratings option (I’ve been hearing about this one since my first day covering Microsoft’s entertainment strategies.) Turns out it could get worse, there are no rating options here.

We also really enjoyed being able to use Microsoft’s DLNA-based ‘Play to Xbox’ feature when we were listening to content stored on our machine locally. Transitioning to listening to the content from our PC’s speakers to our Xbox and back again was something fresh out of science fiction, and the fact that the each device would bookmark where it stopped playing so the next one could resume there didn’t exactly hurt either.

Being a first-party Windows 8 styled app makes you a poster child for the platform after all, if the company that created the thing you’re building and using apps on couldn’t manage to put out a decent app using the provided APIs you should probably reconsider your purchase. Luckily Microsoft does in fact manage to use things like Windows 8’s Charms effectively. When you’re on the same local network as an Xbox, that Xbox shows up under ‘Devices’ and gives you the option stream it. Xbox Music on Windows 8 users are also treated to a very presentable Live Tile showcasing the music their listening to currently.

In a bid to appease those users who would find the singular app view on Windows 8 to be a pain, Microsoft introduced snapped states, an ability to have one application take up 30% of your screen while another could gobble up the other 70%.  It’s a brilliant idea to a problem many new platforms face.  Xbox Music supports snapped states beautifully and still manages to make the app fully functional with access to playback controls, and the ability initiate a SmartDJ playlist, all the while showcasing the service’s new ‘now playing’ animation.

We’ve been on the record complaining for years about the lack of feature parity between the different parts of the Zune media experience. In Xbox Music someone finally listened though pulling all of those features niche features to achieve that parity wasn’t exactly what we had in mind.

On one hand these things should be simple and easy to use. The problem is Xbox Music takes this simplification to near ludicrous proportions. It’s great that our music syncs automatically, but the average observer won’t be able to tell what is locally stored in their “library” and what’s stored locally without having to break out an icon legend. Turning on metadata syncing by default is brilliant until the service manages to replace it with inaccurate data, something that happens more often than you would think thanks to Xbox Music continuing lack of quality information. (No, Drake is not a bluegrass band from the 80s). That problem is compounded even more by those using anything running Windows RT. Those users can’t just download iTunes or the last generation Zune Software to fix that metadata. For them, it’s stuck that way until someone writes a Windows 8 Style app to just edit metadata.

That cheap bar taste doesn’t stop there either. It’s also served with a shot of a lack of discoverability. Let’s just assume that Microsoft deserves a free pass on all the crazy changes that come along with using a Windows 8 style app –which we think they do. The sheer amount of ways they’ve managed to drop the ball on being able to discover things like the service’s huge archive of curated music playlists is mind-boggling.

And finally the fresh-faced hipster Mixologist tops the entire disaster of a beverage with a cheap sour slice of Emptiness. Simplifying or not yet including features is one thing however, openly removing the option to play content for which Xbox Music Pass subscribers pay for is low no matter what the reasoning may be. At a time when Microsoft is pushing cloud connected content strategy on all fronts, these guys can’t seriously think the wholesale removing of music videos streaming –to say nothing of the music videos users previously purchased, is a decent move.

In the end we’re left to gulp this concoction of ridiculousness only to wake up the next morning and realize that the cheap booze drinking sucker who took out the aforementioned soulless, shallow, bombshell was us, and to make matters worse, we’d paid for the experience.

“In the end we’re left to gulp this concoction of ridiculousness only to wake up the next morning and realize that the cheap booze drinking sucker who took out the aforementioned soulless, shallow, bombshell was us, and to make matters worse, we’d paid for the experience.”

Xbox Music for Windows 8 provides the greatest media experience we’ve had so far on machines running Windows 8. The problem is at the time of this review, that isn’t saying much. It plays locally stored music, it streams music via an Xbox Music Pass, it finds metadata for music, it syncs that music behind the scenes, and it’s the only thing in the Windows Store that comes close to providing any sort of a media experience. If you’re running the operating you’ll want to use it fulltime even if it is practically a shell of its former self.

Don’t get us wrong, this is a solid foundation for Microsoft to build on. After six years and a prior reboot, you’ll forgive us for not being more excited at once again having to watch them start all over.

If you are using Windows 8 or a device powered by Windows RT, you are going to use Xbox Music on Windows. Let's just hope by then it's a little less raw.
Get It Now
Learn more about The en policy on affiliate links.