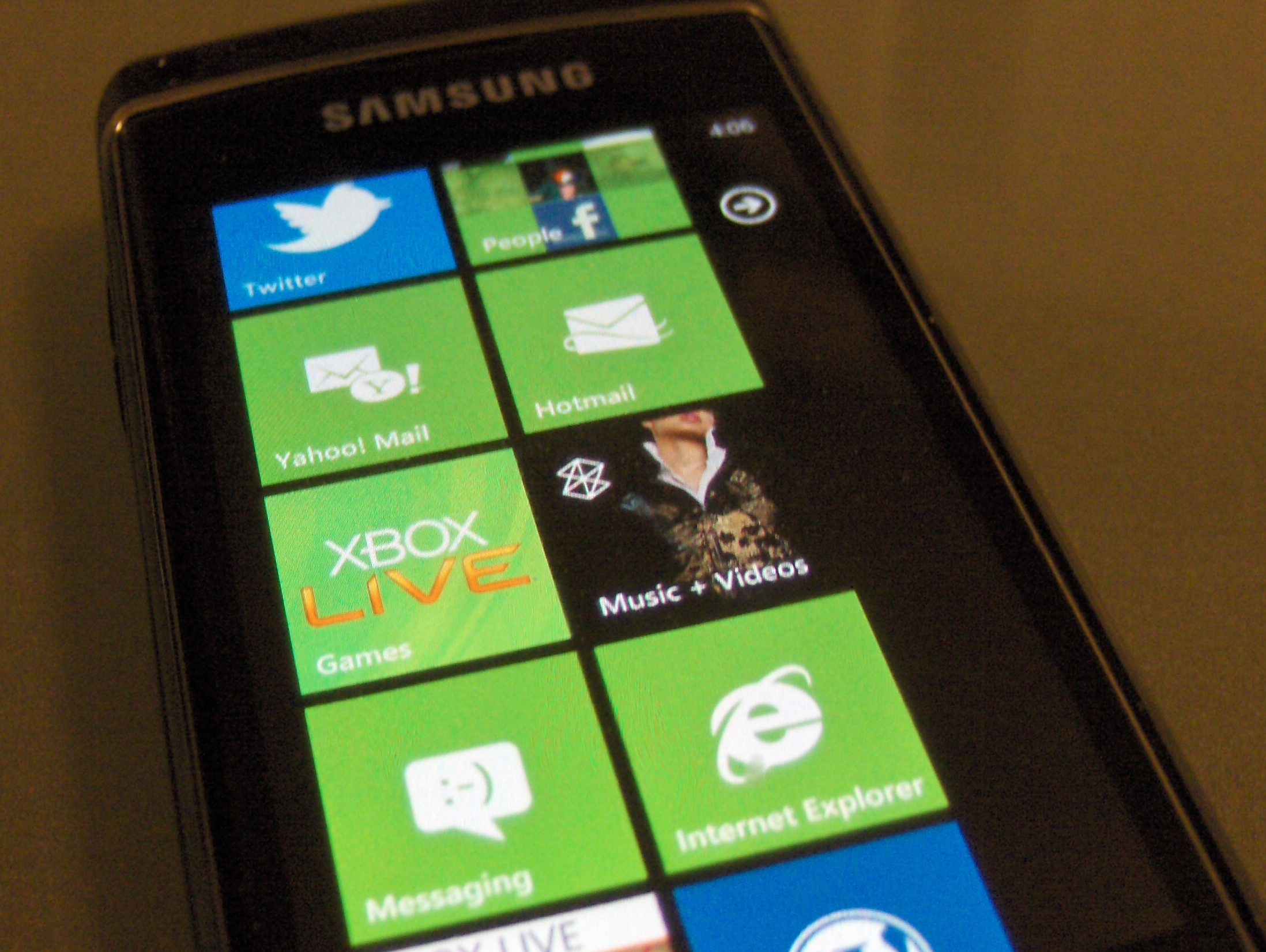 To say that there’s been a demand for Zune on a mobile phone is an understatement. Fans of the platform have demanded such a device since the Zune 30 and until recently it was our understanding that those demands fell on deaf ears. At least that was the theory until Microsoft took the covers off of its Windows Phone 7 operating system during Mobile World Conference. We won’t be reviewing the entire Windows Phone 7 OS, however look out for our overall thoughts in the Backstage Blog.

Zune is included as an app on every Windows Phone 7 device, and can’t be removed, so chances are every purchaser will be using Zune on Windows Phone as their access to most forms of entertainment.

Those who have used any kind of a Zune device will immediately be at home with its Windows Phone iteration. Open the app and you’ll immediately be taken to the music + videos hub; a signature experience of the operating system. Whenever you use Zune on Windows to play a song this area will display that artist in the background as well as on the Music + Video hub’s tile on the home screen. The first area you’ll notice is the Zune menu. Music, Videos, Podcasts, Radio, and Marketplace are all listed here nearly the same way as they were in previous Zune devices. By flicking your screen to the right or left you’ll move to different areas of the hub. “History” presents all the media you’ve enjoyed in the past whether its from Zune or any other applications that can play media; “New” for all the new things you’ve synced from the Zune software or downloaded from the on device marketplace. Lastly you’ll find a list dedicated to other music and video apps; i.e. YouTube. Browsing media in the Zune app works nearly exactly as it did on the Zune HD. Some of our favorites are here like tapping a letter to reveal a quick browse menu to go to other letters, or side swiping to look at more options for a menu like Playlists, Artist Bios, and more. There’s a lot of fit and finish here, and Microsoft should be commended for taking the things that worked with the Zune HD and integrating them in the same useful ways.

As we mentioned earlier clearly Microsoft learned a lot from the design of the Zune HD as most of it’s UI have been brought over to Windows Phone. You would think that would also apply to the Zune HD’s functionality as well. We’ll you’d be slightly wrong. The giant play button is still there allowing you to immediately begin to enjoy your favorite loaded songs on shuffle for example. Both versions of Zune are strikingly similar. There are however a few gotchas that caught us off guard. Way off guard. Here’s a break down by area.

As always it sits perched on the top of the menu, allowing you to easily browse your music by Artists, Albums, Songs, and Playlist. If you’re a diehard Zune user like us you’ll notice our first gotcha; there is no access to Channels in Windows Phone. If you’re not a diehard Zune user; you probably won’t miss it however we do.

Videos again, as always; is perched second in the menu, and just like it’s phoneless counterpart it is a pretty simple experience. If you load videos on it, it sorts them by category and tells allows you to watch them. Simple and easy. However like with Music there’s also a small gotcha here, a few in fact. At the time of publication Zune on Windows Phone cannot play back .avi files like the Zune HD, so if you’ve decided to focus on that format you’re going to have a hell of a time transcoding video via the Zune Software. Those of you who regularly download podcasts or content from the Zune Video Marketplace don’t have to worry though, mp4, h.264, and wmv are all on the device. The second gotcha is now video scrubbing. On a Zune device you can choose to hold down on a fast forward icon or drag your fingers across the play back bar to go straight to where you want to play.

Podcasts are to us an important source of entertainment. We listen to them daily, and value there first class inclusion on Windows Phone. There’s not much to say about this area however. You can’t download podcasts from the onboard Marketplace so that’s out of the question, you can however enjoy on board podcasts through your handset’s built in speaker so we suppose that’s something worth nothing (You’ll find out why we noted that in a second). Bookmarking; that is the device’s ability to pick up on where you left off on a podcast is included in the Windows Phone version as well. You can also pin any podcast you like directly onto the phones home screen. It’s a very first class experience. However if we had to get into the nitty-gritty here Windows Phone on Zune users do not have an option to “Mark as played”, instead of outright deleting a podcast.  In short that means you can’t get rid of an episode of something without deleting the show from your device entirely. As a subscriber to CBS’s “60 Minutes”, we’d like that back, ASAP.

When the Zune 30 debuted with a built in radio we were hella excited. Until then the thought of having it built into a mainstream media player was something foreign. Apple users had the option to buy a separate attachment of course, (we never bothered taking them up on that offer). We hoped then that it would become essential to the Zune platform, and indeed it has. Every Zune device has included a radio tuner and the Zune HD took it even further, letting us have HD Radio with all it’s bells, whistles, and included meta data. Similarly every Windows Phone device has a built in FM Tuner, with the option for hardware makers to include HD if they see fit. Your favorite options are here too, including saving presets of radio stations in your area, displaying of meta data for stations that support it except for “Buy from FM”. While it they may not sell a large number of devices because of radio; we love that it’s here. It’s perfectly implemented and just works. Well almost.

We mentioned speaker playback earlier for a reason, and here it is; you cannot listen to the radio through the speakers on any Windows Phone devices. Reportedly it’s because each device uses your headphones as antenna and therefore won’t get reception. But we call shenanigans. Why? Because even with the headphones plugged in there was no way to play through our Samsung Taylor’s speakers. You have a phone that has speakers and an FM tuner included, but absolutely no way to play said FM Tuner through the speakers. It’ll be a small thing for most people but it was a little jarring for us; requiring one of those signature “Come on” utterances and our new motto “Obvious stuff should work; obviously.” It’s our understanding that Android also doesn’t do this so we won’t hold it against Windows Phone.

Last but certainly not least is the Marketplace. Here you can stream music, as well as browse for the latest in what Zune has to offer. There’s also downloading options albeit hidden a little. Unfortunately you don’t have access to Zune Marketplace’s giant wealth of playlists here, and while that’s disappointing; it’s only shown up on Zune on XBOX so we’re willing to forgive it’s absence. The Marketplace will always show a picture of the featured artist for the week in the background. We found it easy to browse and use.

During Microsoft’s launch party for Windows Phone 7, Mobile Devices executive Joe Belfiore called every Windows Phone 7 device a Zune. However as reviewers we have a problem with that statement in two different ways. As people who are looking for a smart phone that does things in easy and interesting ways we find Zune on Windows Phone to be great. You can stream over Zune Pass content at your whim, check out the latest music, and enjoy our television shows and movies just as easily as we could on a Zune HD.

As a Zune user we are of decidedly mixed feelings. All of the things we just mentioned can be done by using a Zune HD, and finding a Wi-Fi hotspot. To make matters worse there are thing’s missing from our $600 dollar devices that it’s older counterpart can do on a whim, and were not just talking about small things like “Mark as Played”. Picks, Channels and SmartDJ, and Buy From FM are corner stone differentiators for the Zune Platform, and are part of Zune’s mission; that is to help you find new and interesting music. Unless Microsoft’s value proposition to users has changed and we missed a memo; Zune on Windows Phone falls flat in that respect. To complicate matters worse these device offers you absolutely no access to the Zune Social; an issue that for us borders on treasonous. The only real leg up for current Zune users is the included speaker,  3G wireless, and the applications marketplace.

This all leaves us in an awkward position. We’re drawn to the thought of Windows Phone 7 based devices because it could seemingly integrate all Microsoft technologies. We love the other parts of the OS. We highly recommend Windows Phone 7, and Zune separately but there integration together is more on par with an iPhone + Rhapsody then we expected.

We Say: If you have a Zune HD and a phone you are fine with don’t run out and buy a Windows Phone 7 device to use as your only Zune device. You shouldn’t think of it as a Zune, but a phone with Zune Pass that happens to sync using the Zune Software. On the plus side you’ll finally get your apps and a speaker if you do decide to take the plunge.

If you don’t have a Zune HD or have never owned a Zune, Zune on Windows Phone is an experience either on par with older Zunes, or about as equal to using an iPod Touch + Rhapsody.  Users new to Zune will love it for what it does, but previous Zune device owners will feel as if Microsoft is a nun in charge of food, while they pretend to be the little orphan Oliver; “asking please, can I have some more?”

After thinking on it a bit we’ve had a slight change of heart here. As much as we miss the little small features of the Zune ecosystem, “Joe New Zune User” will find the app works as they expect and does what it does reasonably well and while we won’t change any of our opinions of it because of this, that is no small feat.