I suspect that when most of us grew up, the American suburbs were still a calm, tranquil place. No matter what news got out, no matter what world event was shaping the destiny of America, everyone’s lawn was still cut, cars were still being washed in the driveway and maintaining a symbiotic relationship with your neighbors was of vital importance. As Neighbors, which is available in the Xbox Video store this weekend displays, that’s no longer the case.

Seth Rogen and Rose Byrne, star as the sane people in Neighbors, and by sane I mean one of the few characters who aren’t still in college and still doing idiotic things. At some point they’ve given up the party lifestyle that they once knew for a house in a nice neighborhood. Essentially, they’re stand-ins for the audience. After all, who among us hasn’t considered answering to the call of domestic tranquility?

That domestic tranquility is shattered by Zac Efron. Efron’s character is the dude-bro from college who just refused to take life seriously. His fraternity needs a place to stay and the house beside Rogen and Byrne’s will do just fine. At first there’s agreement about the cops getting called, but very quickly the movie descends into dueling hi-jinx. There’s some car airbags and fireworks involved. Rose Bryne even breaks out her seedy charm abilities in a few scenes.

I wanted to like this movie – no, I really wanted to like this movie. I was fine with Neighbors’ pranks. This was a movie that was intended to bring child-rearing suburbanites and college-coeds to the same table. In my experience it did that. “Pull a prank and get a prank pulled on you”, is the moto for the first hour. The jokes that I found funny, a 60 year old grandmother would have found funny. Rogen played the same person he always plays in these types of scripts, a man-child who isn’t ready to let go of his weed smoking, partying ways. To be fair, Byrne’s character fits into this too, though she came off as a little nerdy and sad. Don’t make me say kind words about Efron in this movie — I have none.

Neighbors quickly degenerates into sketch comedy at some point and I’m not talking about the sketch comedy that used to air on Chappelle’s Show. No, the scenes run long and start with a joke that \]either doesn’t make sense unless you’ve just finished with a bong, or that’ll never make sense. A particular scene involving breast milk in the movie was actually funny for the first 2 minutes. Then the joke continued on for 5 more minutes – and culminated in some pretty raunchy humor – and ruined the mood.

Still Neighbors is a good movie. Don’t get me wrong, it’s not good in the sense that it should win any awards or anything. That one extended scene with the breast milk damn near killed my entire movie-high. Still, it’s not a bad movie to watch with some friends or family this Saturday night in Xbox Video or through the Live TV app if it’s airing. If you do purchase the movie from the Xbox Video Store it’s available for streaming on Xbox One, Xbox 360, Windows Phone 8 and Xbox.com and Windows 8. Just be sure to keep the kids in another room or something. Seriously, don’t let your kids see this stuff. 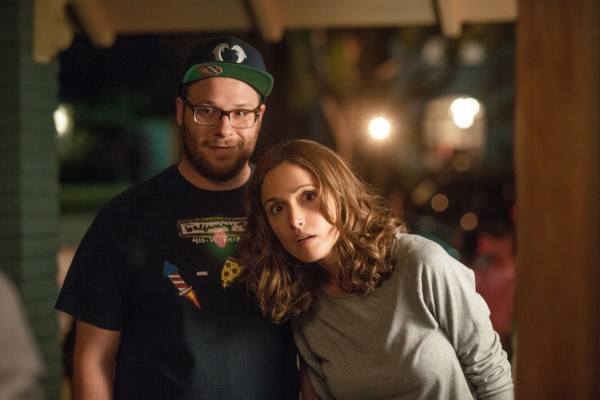