“Forget this being a bad movie; you should watch The Interview because it’s a symbol of western freedom.” Knowing my own bombastic writing style, that’s probably what I would have said about The Interview if I’d have been asked about whether it was worth seeing. I’ll own that. This Saturday night you can rent The Interview in Xbox Video for $5.99. It’s a decent way to spend a few hours if you’re into the comedy Rogen does routinely. If you aren’t, I’d advise you do something more fun, like possibly stuff your hand in a blender.

The Interview wasn’t exactly the most anticipated movie of 2014. It’s a Seth Rogen comedy. Rogen is a producer. The show he runs, which stars James Franco’s character, consistently performs well in the ratings, but is entertainment fluff. Having gone to a decent school, Rogen’s character isn’t happy when a friend from college isn’t impressed by the show he produces. (The friend works for the best television news magazine there is: CBS’ 60 Minutes.) In this world, North Korean dictator Kim Jung Un has finally succeeded in building nuclear weapons and threatening to use them on the West Coast of the United States. Jung Un, happens to also be a fan of Rogen and Franco’s show. In search of a hard-hitting news piece, they request an interview with the world’s most notorious government had. After revealing the interview, the two are contacted by government intelligence. They’re asked to covertly assassinate him.

Look, I’m not in the business of asking crazy people why they do crazy things. I’m also not a big fan of watching a comedy and expecting something thought-provoking and existential. The Interview simply fails at being funny in a traditional way. A friend once told me that comedy and humor are at their best when they’re steeped in truth. It’s easier to laugh at something that you can relate to or recognize. That’s what’s made Rogen’s movies so funny in the past. Knocked Up was funny because it was about someone’s reaction to finding out their one night stand might be sticking with them for the rest of their life.

The Interview’s problem is that it doesn’t know what it wants to parody.

The Interview’s problem is that it doesn’t know what it wants to parody. There are some jokes about the totalitarian state of the real-life North Korea that are valid, but not well executed. Then there’s a few gross out jokes that’ll make you wish you’d rented another movie. There are bits about the nature of journalism and media too. The only one of those that does work is Franco’s excellent caricature of a pompous, good-looking and self-absorbed anchor. Franco nails the grandiose attitude of the media anchor elite. At the very least, it’s the only humor here with some meaning and definition.

If you insist on seeing the The Interview, do so because you have a thing for jokes about boners. Rent the film because you like watching Seth Rogen get “hot girls,” while playing an educated, middle class screw up. I don’t even think those shallow jokes are funny, but there’s a chance you might.

Whatever you do, don’t rent The Interview because you think it might have something meaningful to say hidden behind the random sex scenes, constantly playing Katy Perry’s Fireworks and more. This was, isn’t and never was meant to be a film with a lot to say. Expecting too much was the mistake I made and it cost me two hours. You can also purchase The Interview on Xbox Video for $14.99.

| Saturday Night @ the Movies: ‘The Interview’ 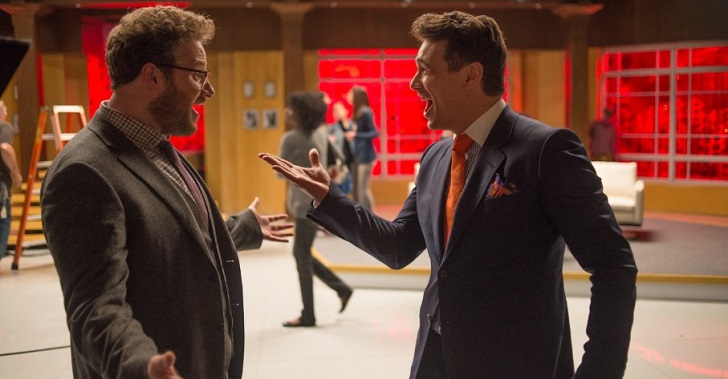