Broadcast television producers would like for you to think that they can pump out quality comedies with little effort. They want you to think that their comedy blocks are the stuff of legend, that you can start watching at 8 p.m. and stay laughing all the way to nightly news. Freshman comedy Black-ish has brought ABC’s Wednesday night comedy block to the promise land – almost.

Black-ish has been mostly compared to its lead-in Modern Family. That’s a lazy comparison though. There’s no fake documentary being shot in Black-ish. There’s no wall-breaking or feel-good moments in the last few minutes. Black-ish is a look at a modern family, but not in the way its companion comedy provides that.

Anderson’s family is well-off and affluent. They aren’t looking for a way to make it out of the hood. (No, I’m not talking outer-wear.)They aren’t in search of a better life. They’ve already found it and that’s where the problem comes in. Black-ish isn’t a comedy about being black in America. It’s a comedy about being black in America and well-off at the same time. There are setups that introduce you to each week’s situation, but they aren’t grand in the way that other comedies have to contrive some outlandish and outrageous thing for the week. Modern Family, I’m looking at you.

Of the four episodes that have already aired I can personally confirm that they’re each contain issues and situations I’ve found myself in. Take the first episode for example. We follow Anderson as he brags about and then subsequently gets a promotion at a prestigious advertising firm. Anderson gets the position but it’s tainted by the title that comes along with it: Vice President – Urban. Anderson’s character rightly surmises that slapping Urban on anything makes it a non-event. It’s a cheap clip in the knees, a reminder that even today, just giving an African American a promotion to the executive ranks requires some sort of justification. Think separate but equal and you’ve got the idea.

While this is going on at work, Anderson and Ellis Ross’ oldest son has his friends at school calling him by a less “urban” name and requesting that he has a bar mitzvah instead of a birthday party. Being of mixed race, Ellis-Ross doesn’t see a problem in it, but Anderson sees it as his son rejecting his lineage.

Black-ish works because the issues and situations that crop up are authentic. In that way, it’s better to compare the show to The Middle than it is Modern Family. In later episodes Fishburne and Anderson are seen coaching that same older son on what we African Americans affectionately call “The Nod.” This episode is a perfect example, of this show’s authenticity. No joke, I’ve always nodded at other black people as a pass them walking down the street. That’s something I don’t do at neighbors who aren’t black. I don’t know why I do that, I just do. That’s the first hint viewers get that this isn’t some half-baked attempt at getting a different looking comedy in front of viewers. There are other moments like this in later episodes, including one involving Fishburne and Anderson on a park bench. I won’t spoil that one. I’ve only just noticed the joke hidden inside the show’s name.

Black-ish is the best freshman comedy out this year and ABC’s Wednesday night crown jewel. Along with The Middle, The Goldbergs, and Modern Family, ABC is now watchable all the way until 10 pm. I’d say 11pm, but Nashville is a bloody disaster of a show.

| What’s On: ‘Black-ish’ has black jokes and the best writing 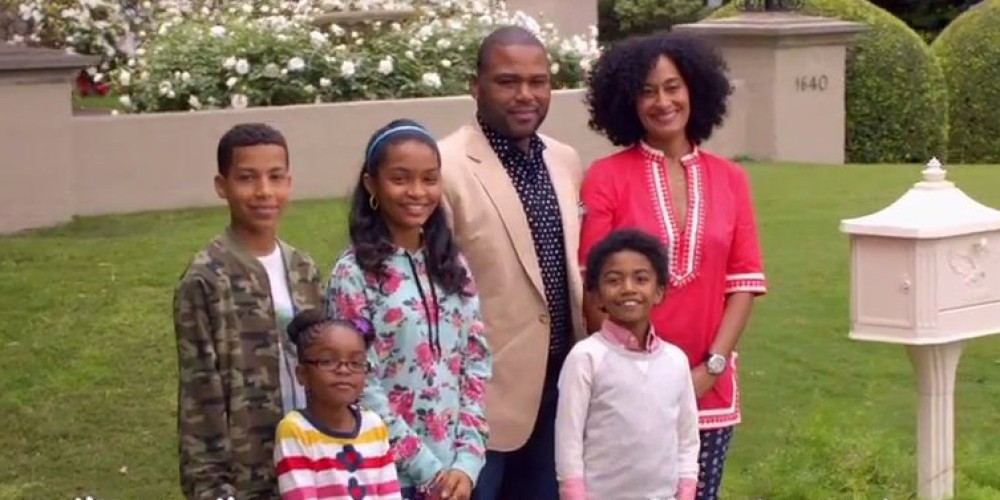