Lately, the key to creating a successful television shows has been authenticity. It’s not enough for programs to show us some glitzy shots of locales we’ve never been to and throw in a couple movie stars. We need immersion, we crave authenticity. In its first year I praised the ABC sit-com Black-ish for its authentic writing. It’d have been easy to create a show with black-jokes and side-eye humor. Instead, for 30 minutes every watcher of that show gets treated to a half-hour of what we really think, but don’t say and how other cultures continue to baffle us. Authenticity is something that Amazon’s Mozart in the Jungle tries to achieve and succeeds at.

I can’t say that it necessarily hits the mark on all fronts; I’ve never been a musician. I can say that, after watching the show, I feel like I know a bit more about the battles that musicians fight everyday. In some ways, their battles are our own. We all feel like frauds and pretenders, like we’re unappreciated and undervalued.

Mozart in the Jungle starts out on a simple premise. Thomas Penbridge, the conductor of the completely fictional New York Symphony, is giving his last performance. He’s stepping aside to focus on doing whatever it is that retired classical music conductors do. Played by the effortlessly ironic and stuffy Malcolm McDowell, Penbridge isn’t happy that’s he’s been pushed aside for a new conductor.

That new conductor is Maestro Rodrigo De Souza. De Souza couldn’t be anymore different from Penbridge. He’s young, able to make women swoon with a gaze. He has long wavy locks and a knack for being dramatic. I’m not sure if the late Michael Jackson could see into the future, but I’m pretty sure if  Pretty Young Thing was about a man, Jackson was referring to De Souza. He’s played by Gael Garcia Bernal.

I’m pretty sure if  Pretty Young Thing was about a man, Jackson was referring to De Souza.

Some dramatics, insults and snide remarks later, you think that Mozart in the Jungle is going to turn into a show about these two guys alone. It doesn’t do that.

Suddenly, the show blossoms. Next we meet the wonderful women of the New York Symphony, Saffron Burrows stars as deeply complicated Cynthia Taylor, a cello player that’s elegant and generally kind-hearted. Taylor takes a liking to one of the New York Symphony’s new recruits, Hailey Rutledge. Rutledge is played by the chipper and happy Lola Kirke. Rutledge is the orchestra’s literal Pretty Young Thing. In some ways, Mozart in the Jungle is Hailey’s coming-of-age tale. Lastly, there’s Bernadette Peters as the Symphony’s primary manager.

In some ways, Mozart in the Jungle is Hailey’s coming-of-age tale.

Authenticity isn’t something that’s easy to translate on television shows with budgetary constraints, plot requirements and other worries to consider. Mozart in the Jungle early on has the stench of a brewing soap opera. “Will they or won’t they sleep together?” “How will they overcome this obstacle this time,” you’ll predict yourself asking half-way through the first season.

I don’t want you to think that this show isn’t a soap opera; it completely is. What authenticity allows the writers and show runners to do in Mozart in the Jungle is get you to realize that every day you and the people around you are living in a soap opera and that’s ok.

The show starts and closes with a different piece of classical music. Everyone in the New York Symphony talks and behaves like they’re a musician. When Penbridge longs to return to the familiar and comfy podium of conductor, you feel his anguish. You identify with Hailey’s post college desire to break into the classical music scene. De Souza might actually be the weirdest artist you’ll ever see on television.

Admittedly, the crew behind Mozart in the Jungle are desperate to make sure that you feel everything you’re seeing is real. That desperation almost never translates into dialogue about how these guys are “dying for their art.” When it does, it’s used as an excuse to ask the audience, without being any more obvious, “Can you believe this guy?” (Rodrigo has this nasty habit of telling the musicians to “Play with the blood.” Every time he does, a character looks at him like he’s been in his office hitting the sauce before they understand exactly what he means.)

Even as Mozart in the Jungle is paying classic musical its dues, it’s setting up some realistic drama.

Even as Mozart in the Jungle is paying classic musical its dues, it’s setting up some realistic drama. Rodrigo, though gifted, isn’t exactly interested in shaking hands and holding fundraisers to get money to pay for his art. Hailey wants to be a member of the orchestra so much that she doesn’t realize she’s tied to the First Oboist in a tale as old as time: At some point, there’s always someone younger and better at your job than you are. Even in the earlier episodes a labor dispute is brewing.

Comedy is sprinkled throughout the two different seasons that are available on Amazon Prime to stream for free too. While bouncing between comedy and drama the show is careful not turn members of the New York Symphony and its caretakers like caricatures. That being said, there are some ancillary characters who are pure buffoons and exist just for laughs. Having these people for the jokes is a smart move.

Mozart in the Jungle is a masterpiece. The writing is superb. The storylines seem realistic to people who’ve never touched a piano key or struggled with a reed. Mozart in the Jungle is available for streaming directly through the Amazon Prime Video apps on Xbox One and apps for iPhone, iPad and Android. Windows users can watch the show online too through Amazon’s website.

| What’s On: ‘Mozart in the Jungle’ is a masterpiece 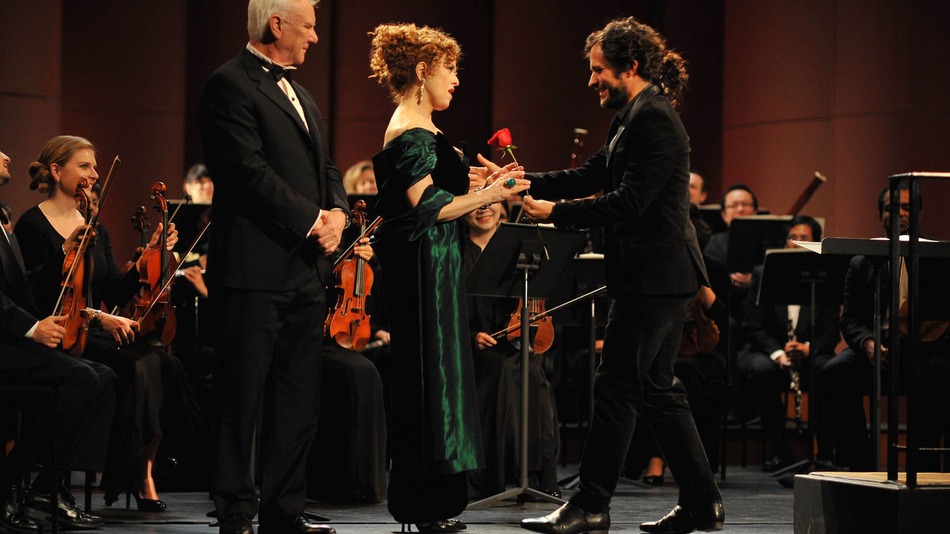