Have you ever run into one of those products that attempt to be both useful and beautiful? I usually stay away from anything that appears to be to pretty after all, good looks are great, but usually aren’t useful. With past experiences in mind, i approached the usefulness of the Microsoft Arc mouse from that same point of view.

Let’s be real straight from the top, under no circumstances should the Arc mouse be considered a cheap mouse for everyday tasks. Why? Well at $49.94 from 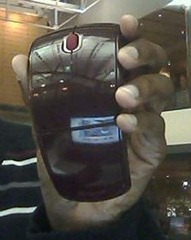 MicrosoftStore is is not by any means a cheap throw away mouse. If you frequently loose them or their receivers, this just isn’t the mouse for you. Now that we’ve watched our pennies let’s get to the fun part.

The Arc Mouse is by far the best looking mouse I have ever used. First let’s start with the rugged exterior, that can also be placed in it’s included pouch for added protection. The top is covered by a hard plastic with a gloss finish and, in my case different shades of burgundy. The bottom is decked out in some kind of rubber that insures you won’t drop it as long as you are paying attention. What makes this mouse stand out from the rest of the pageant contestants however is the way Microsoft decided to make a full size mouse portable. Essentially the entire mouse folds complete in half, storing the teeny receiver, and allowing you to take it literally anywhere you need it to go.

It’s folding in half, while cool, may make it  an enemy for some though. While it does mean it’s excellent for travel, it also means that it may become fragile more it opens and closes, similar to how eye glasses’ arm hinges become less tight after a period of time. Since I just got the thing a day ago, there is no way for me to tell whether this might happen, but it’s something you should think about. Also that tiny receiver I mentioned early could also become a pain in the rear. It works fine and does get a pretty solid range of a few feet, that thing could get lost in a bowl of soup, it’s that small! It’s also big enough though where it sticks out by a considerable amount when in your USB port so it’s unwise to leave it there while traveling with your netbook or notebook.  Remember if you misplace receiver you’ll need to pony up for a new mouse all together, not just a new receiver.

Overall it’s a great mouse and after using it for six hours I’m very impressed. The device does what it does, and it does it well enough for me to let it caveats I have about it go. I recommend it without reservations but remember if you loose that tiny receiver you can kiss the rest of that mouse goodbye as well.

BackStage: A look behind the Scenes of ZuneSpring