For nearly six months we heard non-stop speculation on what capacities the ZuneHD might appear during last fall’s release. According to this GDGT user, there may be a capacity bump coming soon. Bonus device pictures after the break.

Update Oh and just incase this wasn’t enough evidence, Theres no a link to a 64gb Zune over at Zune.net 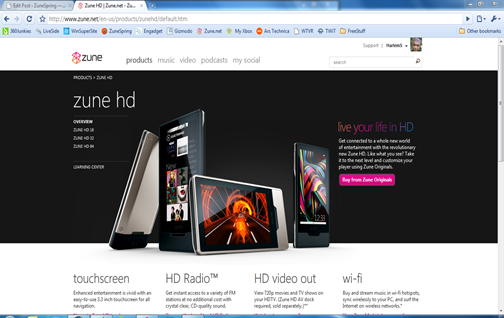 Just to the left there it clearly shows a third capacity labeled Zune HD 64. You too can check it out in person here.

Yes, that does say 64gb, a capacity the ZuneHD does not currently come in. Do I believe it? Not really. It doesn’t make since to make a current generation Zune when it’s widely suspected that the next hardware evolution of the Zune may come later on this year. Then again, I really want one, so let’s hope it is on it’s way.

From the Tips Box: Zune Pass Coming to Canada Next Year?