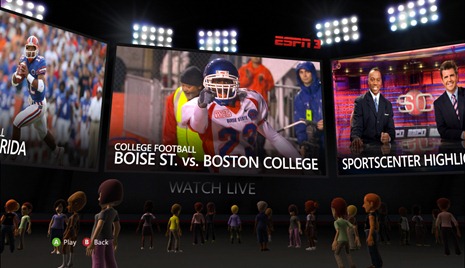 First here’s to hoping you read our exhaustive review on Zune Music on XBOX this morning, as I stayed up all night writing just for you dear ZuneSpring reader. On the off chance you have not I suggest you do so, as it really is this year’s stand out update to the XBOX 360. Of course there are other things that came with the update we didn’t talk about because quite simply, they weren’t Zune related. Well, alas that’s what the BackStage Blog is for. 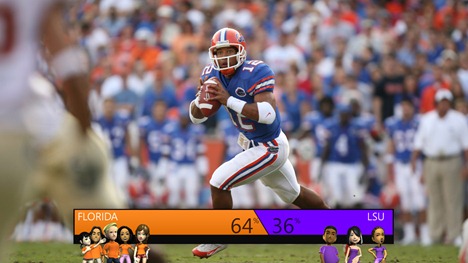 During E3 we covered the event to no end, endlessly debating what would come, hoping that we would hear more details about how Microsoft planned to move the conversation to XBOX’s media capabilities. We got the glimpse of Kinect, and its games, then Zune, then ESPN. During the first few minutes I dreamed of finally being able to rid myself of the evil that was my television subscription. I had lofty ideas of watching the Baltimore Ravens crush the Redskins in streaming HD glory. I would have stats and polls at my fingertips, it would be nirvana. This was finally the thing that was going to get me into sports. To drink beer, eat chips, and talk as men do.

None of that happened. Upon receiving the update last Wednesday ESPN was the first thing I checked out. I took a glimpse at a college football game, watched the Seattle Sounders kick around a few balls and then went looking for the NFL. Yeah, no. As it turns out that would have been too easy. In fact ESPN 3 covers absolutely every other sport sans the one most Americans care about.

So back I hit, shell shocked that my idea of sports fan heaven had so quickly teased me then ran off like yesterday’s troubled teen on the Maury Show. I then decided to check out the rest of the interface. And here’s what I’ve come up with. Other than cosmetic changes and a new voice codec, (which I have yet to try) there isn’t anything in this update terribly exciting if you don’t have, or don’t plan to purchase Kinect or want/have Zune Pass. It’s the same old song really. Great community features, same channels interface, butt-ugly network music and video streaming system, and same slightly less cartoonish avatars. All the action seems to be concerning what I call XBOX Apps. Like Zune they sit in each channel’s interface and support a different media function that doesn’t blend with the rest of the UI. Sure the Twitter, Facebook, Last.FM, and Netflix app are still there, but why should I get excited? There’s still no integration with any of these services.

I won’t pass judgment on the 2010 NXE because this isn’t a gaming site, and more importantly I’m probably preaching to the choir. If they want to impress me, how about making sure I can stream a song via Zune Pass while playing a game?