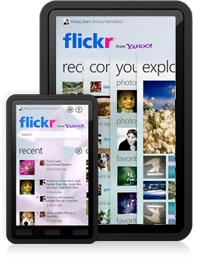 Today, Yahoo! released an official Flickr app for Windows Phone 7 devices. Having downloaded and installed Flickr Manager when I first bought my phone, I was kind of curious to see how the official Flickr app would be different and how or if it would improve on that experience.

Having only used the official Flickr app for a few minutes, its still hard to make any kind of definitive statements about the differences between the two apps, but I think I like Flickr Manager better, personally.

That said, there are a few features that may catapult Flickr past Flickr Manager for people serious about using the service.

You can take and share photographs from directly within the Flickr app. With Flickr Manager, at this time, you can only share photos that already exist on your device (meaning you would have to exit the app, enter the camera app, take the photo, then choose to share the new photo from the “Extras” menu as mentioned above, in order to share a new photograph).

Apparently Flickr also released a new desktop/slate/tablet application to act as a companion to Flickr for Windows Phone. You can set Flickr to automatically sync between your phone and the PC application. I’m not yet sure what the advantage is of this, since Flickr has traditionally been an exclusively online service, but I guess time will tell.