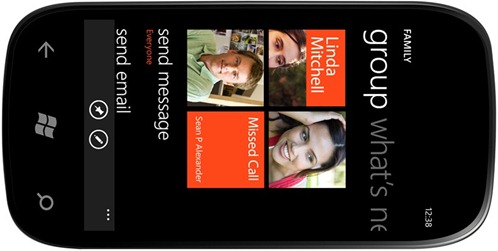 Coming sometime in the fall Windows Phone Mango will debut some pretty hot features designed to surpass what’s already out there and differentiate it in the marketplace. We’re still sifting through a lot of the information we’re getting thrown at us, so forgive us for directly quoting Microsoft.

Groups. Group contacts into personalized Live Tiles to see the latest status updates and quickly send a text, email or IM to the whole group, right from the Start screen.

Linked Inbox. See multiple email accounts in one linked inbox. Conversations are organized to make it easy to stay on top of the latest mail.

App Connect. See apps in search results and hubs such as Music + Videos and Pictures. App Connect works with Marketplace, so results include both apps already on your phone and new apps to download.

Improved Live Tiles. Live Tiles are more dynamic and can hold more information—making it easier to get real-time info from apps without having to open them.

Multitasking. Apps can now run in the background while preserving battery life and performance. You can also quickly switch between open apps.

And Marketplace, which now has more than 17,000 apps, will be available in 35 countries starting this fall, nearly double its current footprint. You’ll also be able to buy apps online. (Matt Bencke has more to say on Marketplace expansion plans and the beta release of the free Windows Phone Developer Tools on the Developer Blog today.)

Finally, there will also be more phones to choose from. Many of you probably already know about our exciting alliance with Nokia. Today we’re also announcing new partnerships with Acer, Fujitsu Limited, and ZTE Corporation to deliver new Windows Phones handsets.

We’ll be back with more analysis later this afternoon.

HTC Trophy Coming to Verizon on May 26

HTC Trophy Goes on Sale at Verizon, Promptly Goes Out of Stock?