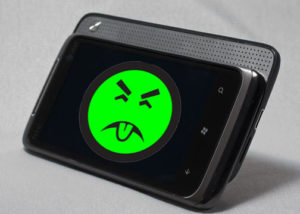 Yesterday afternoon, I noticed that my HTC Surround was acting a little strangely. The main issue I was experiencing was, when I attempted to download and install updates for some of my apps, I kept getting an error message telling me to try again later. After this happened a few times throughout the day, I finally decided to power cycle (turn it off and back on again) my phone to see if that would fix the issue.

Little did I know, though, that my phone would never turn back on again (not properly, at least). When I turned it back on, I got the familiar white “HTC” screen that I usually see for about a second before it loads the “Windows Phone” splash screen and finished booting up. Sadly, it never progressed past that white HTC screen.

After scouring Bing for more information about this, I came across a handful of forum posts and articles about the subject (apparently this happens on a lot of HTC phones, not just WP7 ones). The main advice in the articles was to hold down the volume up and volume down buttons simultaneously while powering the phone on. That would bring up a diagnostic screen giving me 2 options: 1) Reset the phone to factory defaults or 2) Get the CRC Checksum for the phone.

Finally, I decided to bite the bullet and reset the phone to its factory defaults to see if that would at least get me back up and running. Unfortunately, that didn’t do anything for me, either.

I left the phone plugged into my wall overnight, and when I woke up this morning, I saw that it had progressed past the HTC screen, but the news was still pretty bad. Now, there was an error message on my screen telling me that my “Storage card is not working”.

The screen basically told me that my SD card was either corrupt or non-compliant, and that the only solution is to replace the SD card with a compliant piece of hardware. The problem, though, is that the SD card in the Surround is not accessible. In order to access it, I would have to void the warranty on my phone.

Once 8 a.m. rolled around, I called the HTC warranty center to see what they had to say. They asked me if I had tried contacting Tech Support, and I told them I hadn’t. They put me on hold for about 10 minutes and came back to tell me that Tech Support said there’s nothing I can do about the problem, and that I would have to send it off for warranty service if I want to get the problem fixed.

While I’m 99.9% sure there’s nothing in my phone that would void the warranty, this prospect still seems a little scary to me. What if the package gets wet on its way to the HTC repair center? What if they randomly decide they don’t like me, and claim that there’s non-warranty damage to the phone once it arrives? I have a terrible feeling that I’ll be stuck over a barrel at that point.

I plan to visit an AT&T retail store later today, just to make sure there’s nothing they can do for me; but I suspect they’ll simply tell me to contact HTC support.

I also have a protection plan on my phone through an independent company; and I could get my phone replaced through that. However, in that case, I’m responsible for the cost of shipping and insurance on the package to get it to their repair/replacement facility.

Out of the 8-10 phones I’ve owned and used throughout my life, this is the first one with which I’ve ever had an issue, so it’s a bit daunting to figure out exactly how I should handle the situation. I’ve had to have my stepson’s phone replaced under warranty before because it simply stopped working. However, in that case, the device was manufactured by Samsung. When I had that phone replaced, Samsung actually shipped us the replacement device (without a battery or battery back), and we were then responsible for returning the defective unit. If the unit didn’t get back to them within a certain time period, we were told that we might be charged the full price of the phone.

We’ve also had my wife’s Blackberry replaced under warranty twice before (in the first instance, we were able to simply walk into the store and get a new one, because we were still within the first 30 days; and the second instance was very similar to the Samsung situation mentioned above).

Have you had any phones die on you while still in your warranty period? What steps did you have to take to get them replaced? Has your Windows Phone died? If so, how painful was it to get everything set back up (apps, photos, music, documents, email accounts, etc.) when you got the replacement?

Last night, I took the phone into the AT&T store. While there was nothing they could do for me in-store, they did tell me that I should call the AT&T warranty hotline at 1-800-801-1101. Note that this is different than the HTC warranty/repairs hotline listed on HTC’s website.

In the meantime, I was also able to get my phone to a point where it was asking me to connect it to my computer (I also somehow got my phone to a screen that said “Entering USB host mode:” and a different screen with color bars on it that, when hooked up to my computer, started downloading the Windows Mobile Device Center to my PC; but both of those modes were useless). While it was in recovery mode, my Zune software recognized the phone and tried to run a restore process. However, after it finished step 1 (restoring the device), it got stuck on step 2 (restarting the device). It stayed on that step overnight (with the phone showing the white HTC screen I referenced above). So, basically, that was another handful of hours wasted, sadly.

When I called the number, they asked me to confirm that I had done each of the troubleshooting steps and then set up a replacement. They gave me the option of taking my device to a semi-local AT&T store (about 2 hours from here) where they do onsite repairs and replacements; or setting up a replacement through the mail (as we did with my stepson’s Samsung phone).

I chose the by-mail option and am now waiting for my new phone to arrive.

HTC Posts Reveal Ads for Their Newest Windows Phones, The Titan and Radar

3 Comments on “The Death of My Windows Phone – Part 1”