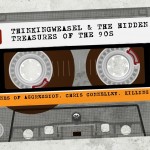 So I recently encountered the show ‘Portlandia’, drawn in by the clip “The Dream of The 90s is Alive in Portland“. The rest of the show is never as funny as this bit. Mostly because Fred Armisen can never just do the joke and make it funny. He has to crush every last bit of humor out by dragging the jokes on so long past funny that you end up hating him and his show. I wonder if he does it intentionally to amuse himself, knowing that people will begin rolling their eyes and start thinking “OK! I GET IT”.  The fact that I know that he knows renders his knowing powerless.

Despite that, it got me started thinking about 90s music and how when things went bad for music in the 90s they went REALLY bad. There was a lot of promise there that got squandered. The gem is this though: For all that went wrong with music in the 90s, there was a hell of a lot that went right. Some great albums came out and a lot of just good ones too. This episode is made up of some hidden gems you may have missed back then. Not your usual Seattle type fare, but you will recognize the feel of it all and think of  that favorite old flannel just the same.

Engines of Aggression is a band I discovered on cassette in a bargain bin my freshman year of HS. There is very little info available on these guys now but these first 2 tracks (the only ones Ive been able to find) are great drive fast at loud volume tunes.

Chris Connelly is a veteran of many projects with Ministry’s Al Jourgensen. He wears the mark of those harder years on his programming style but has a more mellow solo sound. I know that sounds hard to imagine, definitely worth the listen.

WW1 (right click to play, left to save as)