When I opened the Marketplace (or Windows Store or whatever it’s called nowadays) on my Windows 8 PC this evening, I noticed that the official Twitter app is finally available. I suspect that it’s no coincidence that the desktop (Adobe AIR) versions of Tweetdeck were sunsetted at the same time Twitter finally released the Windows 8 app.

Taking a quick look at the app, it’s fairly nice, but very minimal. When it’s snapped to the narrow side of your screen, it very closely resembles the new version of the Windows Phone Twitter app, but when it’s set to full screen or it’s snapped to the wide portion of the screen, it looks very sparse and empty. The app doesn’t seem to support columns or multiple accounts (not yet, at least), so all you see is a single column, no matter how you have the app positioned on your screen.

Have you installed it and played with it yet? What do you think? 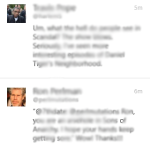 Snapped to narrow side of screen 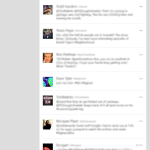 Dell going private, declares it can only innovate if its beholden to shareholders

Microsoft rolls out updates to Xbox on Windows applications