The smoke has cleared now. Assassin’s Creed Unity has been patched more than an original Winnie Poo styled quilt from the 1920s. How good is Assassin’s Creed Unity? Are its characters and its remarkable recreation of Paris, France worth getting excited over if you have them waiting in an Xbox One bundle underneath your Christmas tree? It’s a fair question.

The City of Beautiful Light

The City of Beautiful Light

Maybe by now you’re familiar with the setup. Assassin’s Creed Unity has the same raw materials as every single game in the franchise. You aren’t an Assassin. You’re an Initiate, recruited by the Assassin Order to explore the memories of Arno Dorian, who actually was a member of the Assassin Order in Paris, France during the late 1700s.

You begin the game as a boy, wrestling with a tragic death. You are weak. A short tutorial guides you through the new controls. Remember having to find a haystack to jump down in past games? With your finger on the A button you can climb to your heart’s content. With the B button you can get down just as quickly. Holding the left trigger gives you the predatory reflexes of a giant cat people have to run from on some continents. Firing a quick shot from Arno’s gun is as simple as pushing a bumper button.

The controls in this game are absolutely beautiful. If they were something tangible you could look at they’d be the most visually appealing thing I’ve seen in a video game this year. They aren’t, so I’ll have to award that superlative to the city of Paris itself. Paris looks absolutely amazing in Assassin’s Creed Unity, particularly when the sun is shining. The weather system and lighting system work together to make the city feel alive as you climb buildings and gaze into the sky above. The way light hits some of Paris’ landmarks just takes the breath away. It’s disappointing that once you get your feet on the ground Paris feels less alive, less wonderful. That’s a shame, the NPCs themselves – and there are thousands of them in some spots – look great. No amount of random, Catch These Guys or Kill These Thugs mini activities make walking through Paris feel life-like though. True, the world of Assassin’s Creed Unity shows more signs of life than past localities, but there’s still room to improve next year. 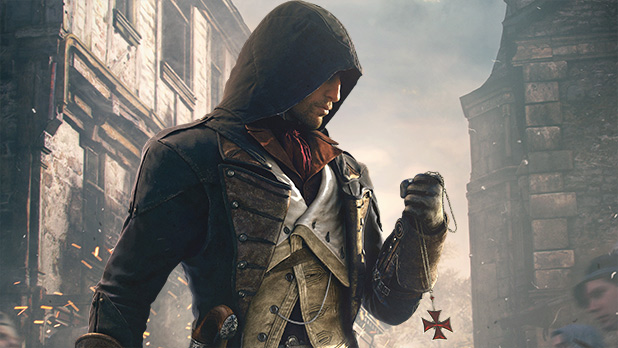 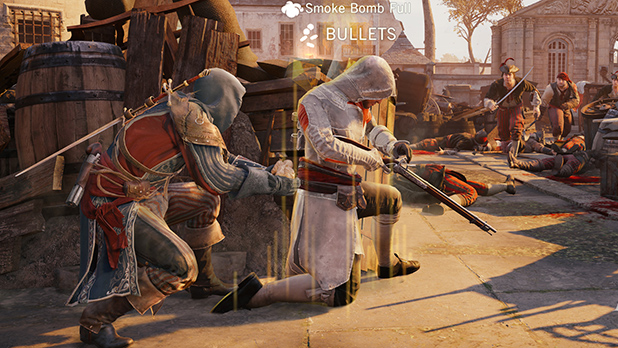 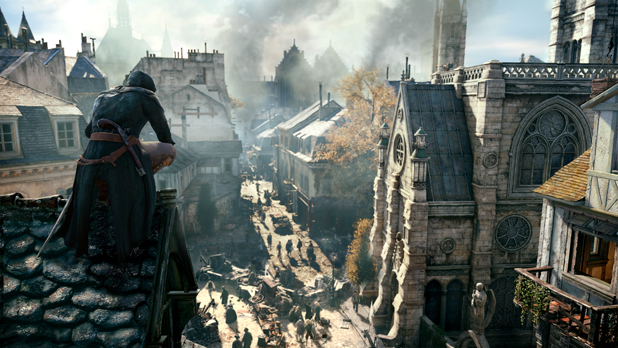 A Life Not Lived

A Life Not Lived

Assassin’s Creed Unity’s benefits form an interesting locale; you’re playing before and during the French Revolution. You still end up climbing on things you don’t want to and dropping into windows you didn’t mean to, but the controls are passable. What gets Assassin’s Creed Unity into a remarkable amount of trouble is its story. For an open-world game, there’s a lot of it, and almost none of it actually holds up.

Arno Dorian is a spoiled child. All through the happenings of Assassin’s Creed Unity I kept hoping Ubisoft didn’t waste a great set-up and story on a contrived tragic love story. That’s exactly what they did. I won’t spoil the details for you, but that’s only because I’m guessing you can figure out what’s going to happen the moment you encounter the rest of the game’s central characters. I walked away from that core story loving the mechanics I got to use and  thinking, “What the hell was with that ending?” Seriously, I felt like I’d mysteriously had my enthusiasm for the Assassin’s Creed story pierced by a Phantom Blade knife without my knowing it was in danger. I was definitely expecting a bit more following Assassin’s Creed 4: Black Flag. Speaking of the Phantom Blade, I love it. Not being able to whistle from behind something and destroy some unsuspecting sucker, not so much.

I will say this, the game’s Paris Stories were inspired. I’m never going to get the opportunity to meet Madame Tussaud in person. That Ubisoft was able to weave historical figures like her into the game and inspire me to learn more about her was great. Historical figures play a big part in this game, including a favorite of mine that players run into at the end. Don’t forget to solve a few murder mysteries and riddles too. 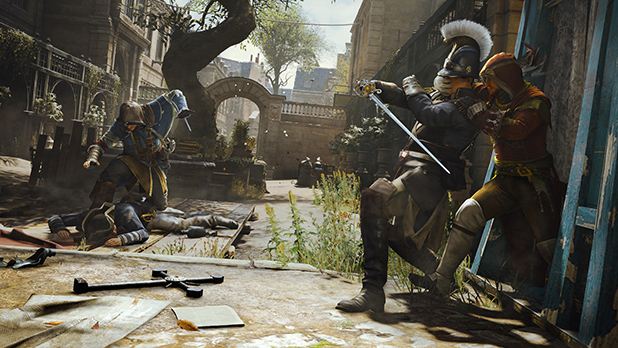 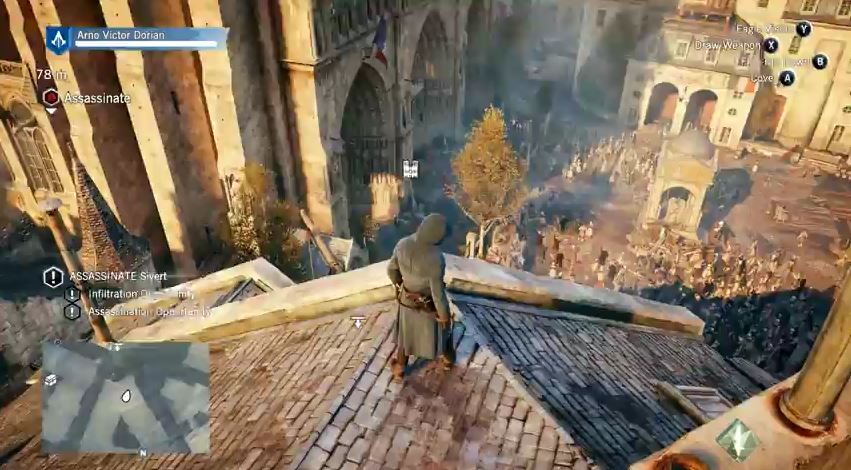 Good game mechanics are key to a decent experience. These can be certain weapons, maybe unique features that make the title what it is. The trick to kick starting a successful franchise is finding a mix of new and old mechanics that work so well gamers are willing to pay over and over to relive the magic, to experience something that’s bigger than the sum of its parts.

Mechanics evolving and working in harmony is how the Assassin’s Creed franchise made it to Unity. Screw ups in core mechanics are why Ubisoft should be thinking hard about whether the series will last another two games or so.

There’s so much in the mechanics department that Assassin’s Creed Unity gets right. Treasure chests are back and they’re scattered throughout Paris, France. There are all different kinds of chests; chests that just open and chests that require that the user big decent at picking locks are some of my favorites in this game. In older games, Assassin’s Creed players simply had all the necessary skills they needed to get the job done. Mastering these core skills and picking up more was very important, but you just practiced and you got better. On some level, both of these are slightly perverted in Assassin’s Creed Unity.

Unity’s story is that of a person who went from something to nothing and the game’s skills system reflects that. Everyone starts out with the most basic of tools, armors and skills. Completing more missions gets you more Sync points to spend on more skills and armor. The armor I understand, having a virtual currency for skills like double assassinations is sure to tick off a few series veterans. Assassin’s Creed Unity has virtual currencies for buying armor, weapons, another for buying skills and another that effects power-ups and allows users to pump real money into the game.

It’s that last one that I don’t personally like. It’s tacky and it doesn’t belong in a $60 game. It felt cheap, and it wasn’t like it wasn’t already slightly complicated keeping all of these different currencies straight.

This game includes a stunning array of different custom pieces for character customization and upgrades. Buy one piece you like? Upgrade it again and make it even better. Change your color and you almost have your custom Assassin. I say almost, because it’s not like you can change Arno Dorian’s physical characteristics.

Where the mechanics wheel rides off the rails is the third kind of chests that are scattered throughout Paris. To boost participation in the Assassin’s Creed Initiate online mini-game and the companion app, there are certain chests that require you to do things on a separate screen to unlock them.

I liked the basic character customization; I created an assassin tailored to my style. I liked the weapons; poison bombs are the best thing since canned cheese. In some way, the evolution of some of the series mechanics has warped them too far. A companion should enable extended experiences, not be a requirement. Nothing blows a chest-high like suddenly finding a one and realizing I need to pull up a companion app on my phone to unlock. 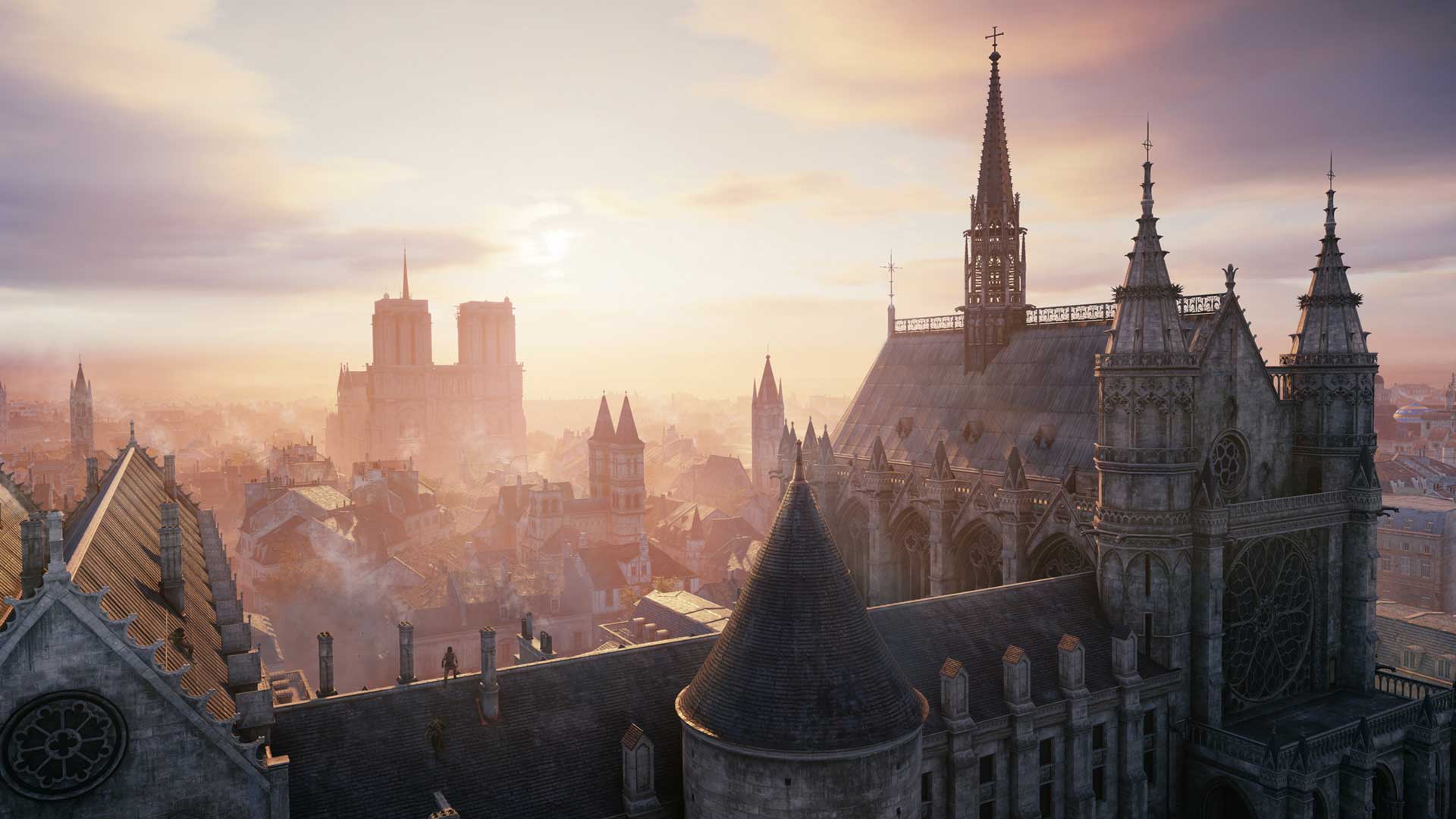 I like Assassin’s Creed Unity. I may have even loved Assassin’s Creed Unity. It’s worth playing and paying for. In some ways; in many ways really, it sets a dangerous precedent for the series. Character customization hit the right notes. Paris Stories were fun. Even the modern-day hacking sub-plot was cool — if not necessarily that interesting. I liked feeling like an Assassin who knew nothing and slowly evolved. Paris was gorgeous; and if the Phantom Blade isn’t back for next year’s game I’ll throw a tantrum, I wear that I will. This is my favorite Assassin’s Creed yet and the co-op missions mean I’ll be replaying it over and over.

Unity marks a few new lows though. The companion app and co-opted chests are just plain bad ideas. Dorian was a cool guy, paying the price for his own sins and sins of his country men. He’s a guy that can I can identify with. Along those same lines, Assassin’s Creed Unity is video game paying for Ubisoft’s sins. That’s a shame, because under Ubisoft’s tarnished reputation and overreaching companion experiences is a game made of gold.

Assassin's Creed Unity is on the cross dying for its father's sins. Which stinks because it's definitely a decent game that was just in need of bug fixes and more testing.
Get It Now
Learn more about The en policy on affiliate links.