Time dulls the mind. For a while, I thought it might dull my love for all things Harry Potter. Turns out, It was just waiting for the right movie to return with a vengeance. I’ll put my cards on the table now. I enjoyed Fantastic Beasts: The Crimes of Grindelwald so much that I think it might manifest into something I will need to seek professional help for.

In theater’s this week, The Crimes of Grindelwald wasn’t what I was expecting. The first movie, Fantastic Beasts, was great. It welcomed you back to Rowling’s world of wizards and introduced you to new characters. Some of them were the most adorable animals you’ll ever see. Newt Scamander’s (played spectacularly by Eddie Redmayne) love of animals, fear of a desk job and social awkwardness were instantly relatable. Tina (Katherine Waterston), Queenie (Allison Sudol) and the lovable Kowalsky (Dan Folger) made for an offbeat, fun squad. After watching it you just felt like the world was a better place. I thought we were getting more feel-good relatively low-stakes fun this time around.

Crimes of Grindelwald ain’t that at all. Now that you’re invested in Newt and the gang, Rowling has raised the stakes. Grindelwald, the villain we got just a tease of in the last film, and Rowling’s sharper pen make for a thought-provoking and emotionally brutal film.

The movie shatters your light-hearted expectations immediately. From a half-hour in, you know that Grindelwald is a bigger threat than Voldemort ever was. They’re both power-obsessed madmen, but Voldermort used the threat of death and the allure of power as his chief weapons. You were always afraid of what he would do with his wand. 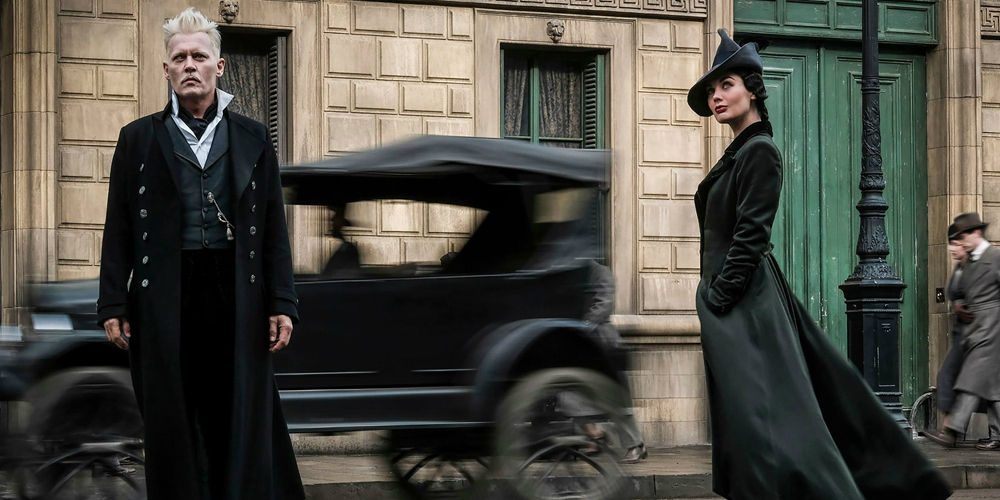 Physically, Grindelwald does very little in this movie. Instead, you’re afraid of what he’ll say or what he’ll convince a fanatic to do for him. He’s cerebral, always plotting his next move. Whereas Voldemort built an army out of the people who thought the same way he did, Grindelwald is out here building a movement. There are times when the spiky-haired insane person maybe even convince you that he has the right idea.

The scene most likely to make you second guess what side you’re on is evidence of a new trick Rowling has perfected since writing the Harry Potter books.

I see what you did there.

Her past work relied on metaphors, what ifs and imagination to connect events in Potter to what’s happening in our own world. Crimes of Grindelwald takes the real world and brings it into the Wizarding World, no imagination or relativism required. It’s such a mindfuck that I whispered “God damn” in the darkness of a crowded theater and forgot where I was. Don’t worry; the Look of Death from the clearly offended woman next to me reminded me of everyone else’s prescience soon after. If you’ve ever asked for something in a store when your mom told you weren’t getting a thing before you left home, you know the look I’m talking about.

Crimes of Grindelwald also continues the tradition of split-second trickery that the first film ended with. Here, because the stakes are higher, these twists hit you harder.

I do have some unfortunate news for fans of all the magical creatures in the first movie: We don’t get too many new beasts. Picket and the Niffler make brief returns, though. Newt’s case is more tool than a wondrous place this time around. I’m fine with that since there’s more time for us to meet new characters, like Jude Law’s Albus Dumbledore. Law nails the sense of magic that Richard Harris brought to Sorcerer’s Stone & Chamber of Secrets. He’s worth the trade-off. 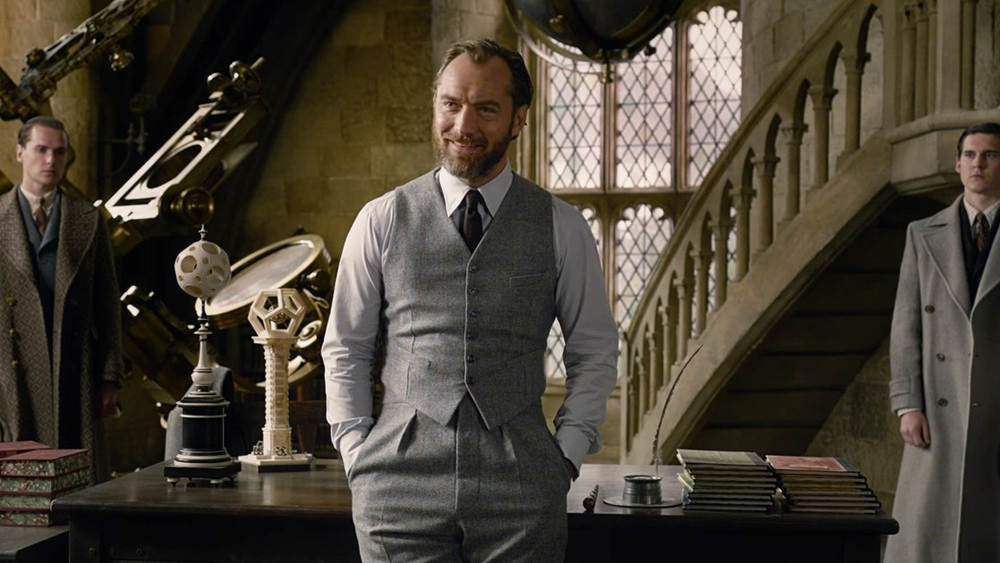 Unfortunately, there are other trade-offs you may not like. At times, the pace of Fantastic Beasts: Crimes of Grindelwald gets frantic. Worse, if you’re seeing it and you haven’t seen the first movie or read the books, you’re bound to feel a little left out too. That’s easily remedied, though. Take the Potter fanatic physically closest to you to the movie and have them explain stuff on the drive home. I’m sure they won’t be able to shut up. I couldn’t.

The film also gets annoyingly obsessed with showing you how amazing the world that witches and wizards inhabit is with every new location. I get it: digital art is cheap, and magic lets wizards float and make cool things. I’m good.

All that said, I don’t think Crimes of Grindelwald feels like the “prologue to another movie” other reviews have described. That being said, yeah, it is meant to whet your appetite for a sequel and get you more interested in a larger universe. You know, like every other movie made after 2001. Also, water is wet. You can’t park on a parkway either.

In the end, Fantastic Beasts: Crimes of Grindelwald borrows the first film’s characters and a few creatures and delivers something better. I enjoyed it, and I think everyone but heavy action and crime movie lovers will too.

Time had dulled my passion for the Harry Potter series. Now, thanks to new takes on old characters and more potent storytelling, I’m sitting in a chair planning a Potter movie marathon while writing down theories about stuff I saw in the movie.

| At the Movies: Fantastic Beasts: The Crimes of Grindelwald review 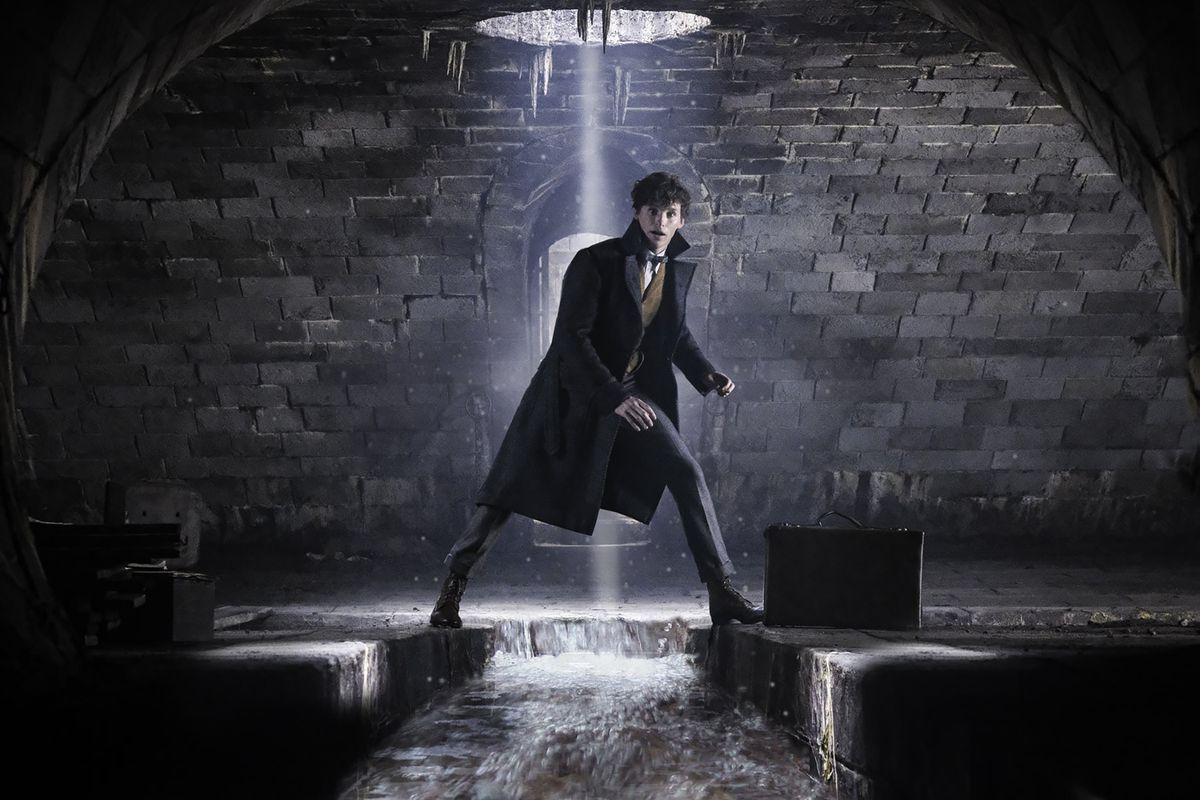