Forget what you’ve heard. The world isn’t sitting on the edge of the next generation of entertainment. It’s already gone over the cliff. Today, gaming systems don’t exist in some perfect vacuum of functionality and anyone who tells you such things is abusing spirits the United States’ now repealed Prohibition laws were meant to curtail the usage of.

Gaming systems don’t exist in some perfect vacuum of functionality..

People expect their devices to turn on almost instantly and they expect to have options that let them expand its functionality through applications. They expect to switch between different entertainment options without hassle. At the same time, they want the best gaming graphics around. Lastly, this magical box needs something different, something that makes it worth paying for. It’s into this market that Microsoft has delivered the Xbox One.

Microsoft’s latest attempt to corner the living room, the Xbox One – I should say attempts – to take on these challenges.

It’s to their credit that Microsoft’s Xbox Team has always approached the living console as a device that can evolve with the public’s needs and the latest trends. Unfortunately, the Xbox 360 and original Xbox never felt like they were well equipped for the task hardware-wise. Sure, all of Microsoft’s consoles have featured a hard drive of flash storage, but the Xbox 360 still feels like a device that’s limited by its hardware.

Presumably, the Xbox One was designed to keep that at bay. Every Xbox One ships with all the technology Microsoft might need to take on the entertainment consoles, cable boxes, rival video game systems and set-top boxes. 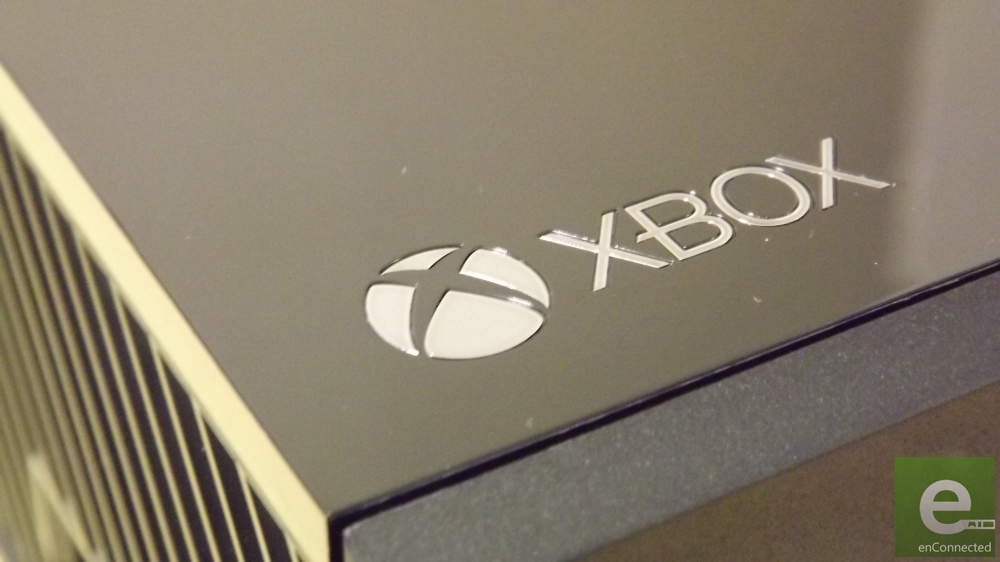 For starters, every Xbox One is equipped with a Blu-ray disc that allows users to load disc-based games to their system. They can also use that Blu-ray drive to watch their favorite movies and television shows if they’d like – though they’ll need to download the Blu-ray app before that functionality will work. Launch editions of the console come with a 500GB hard drive that allows users to stop video games, recorded clips and applications too. There’s also a pair of USB ports for connecting controllers, optical audio out, HDMI out and a special HDMI pass through port that allows the Xbox One to integrate with users cable boxes. Microsoft has also thrown in wireless connectivity and an Ethernet port to connect to the internet too.

Everyone who purchases an Xbox One this holiday season will receive the Xbox One itself, an upgraded Kinect 2 sensor, a revamped controller, a HDMI cable and rather large and bulbous power apparatus that I’ve heard some people charitably describe as a power cable. 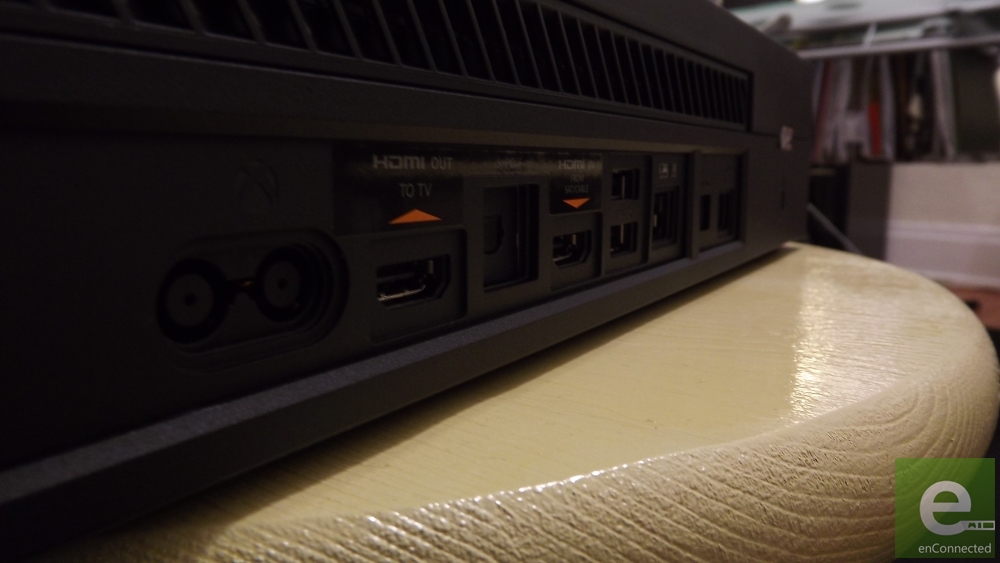 If Xboxes were super heroes than the Xbox One would be the dark alter-ego of the always cheery and gleeful original Xbox 360. Seriously, whereas the Xbox 360 welcomed attention with its curvy white exterior, the Xbox One is a massive black brick. In fact, the Xbox One’s look and feel could be completely summarized as a big shiny, rectangular box with a glowing Xbox One logo and plenty of vents.

Microsoft has mentioned that the Xbox One was designed to blend in with user’s entertainment experience. I’ve heard talk that the console’s designers felt they needed to purposely create a console that looks like the audio receivers, sound bars and stereo equipment users surround their television sets with. Let me be frank, this thing looks like a half-glossy half-matte VCR or DVD player. That’s cool, but I’m going to need die-hard Xbox One fans to stop telling me it’s somehow the most beautiful console they’ve ever seen.

That isn’t to say that the design is bad. It’s simply utilitarian. The only thing I didn’t like here was Microsoft’s liberal use of glossy plastics. As anyone with black furniture or devices could predict, the Xbox One was covered in dust and even scratches after merely setting the console up and placing it on my Ikea bought entertainment stand.  I don’t know how the scratches got there, but it’s definitely not a unique situation. A second Xbox One that sits in my office also has more than a few scratches from objects unknown.

[one_half] The Kinect 2 sensor is a marvel to behold. Like the Xbox One itself, Kinect 2 sports a glowing Xbox logo that lets users know that it’s powered on. The Kinect 2 sports just one camera, a front-facing high-definition camera and motion tracking technology that Microsoft says should help the console track users more accurately than its predecessor. Voice commands are back in a big way with the Xbox One too. As such, the Kinect 2 includes a mic array that Microsoft says should help it isolate room noise from voices.

In my experience, Kinect 2 certainly performed better than its predecessor. Unfortunately, hand gestures just aren’t reliable. The Kinect 2’s high definition camera also has a wide-angle, likely leading to Microsoft’s decision to ditch the automated position motor from the original device. If I had to guess, Kinect 2’s inaccurate gestures stem from the sensor not being able to maintain a direct lock on users. Of course, I know nothing about this sort of thing so clearly, you shouldn’t take my word for it. I do know that after I adjust the angle of my Kinect 2 sensor, most of my problems with gestures went away.

Finally, the Kinect 2 includes an IR blaster that allows it to control television sets, audio equipment and more. Being able to say “Xbox, volume up” to control your television is awesome. You can also have the console automatically turn on your television set and extra equipment by simply running your finger over the console’s power button or by saying “Xbox, turn on.” Hey Elroy Jetson, checkmate. [/one_half] [one_half_last] 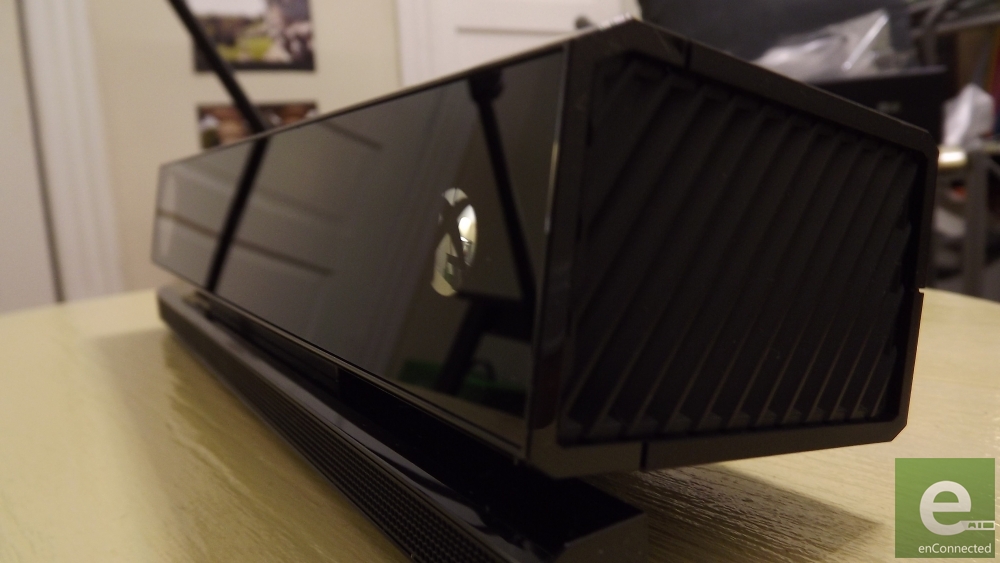 The Xbox One Controller 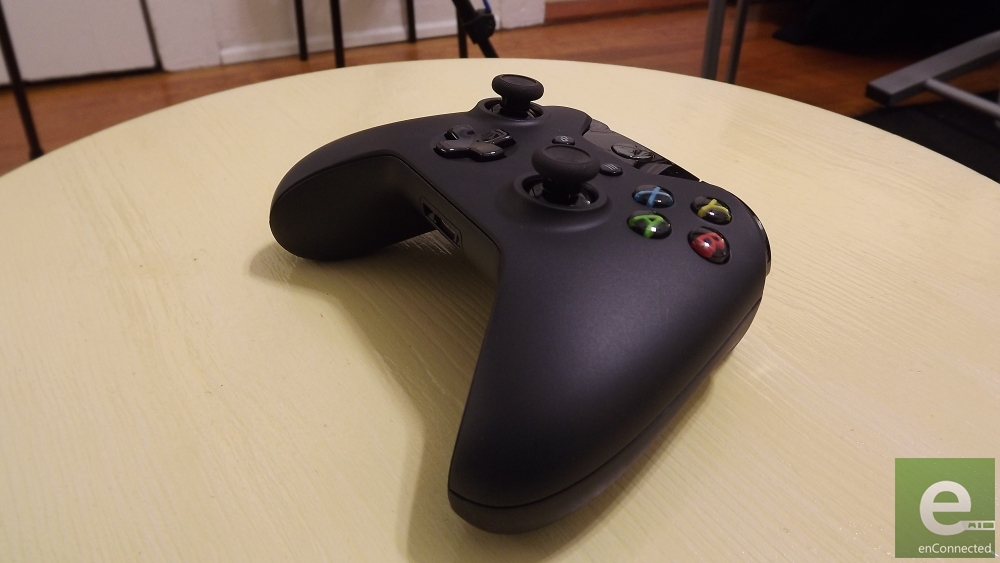 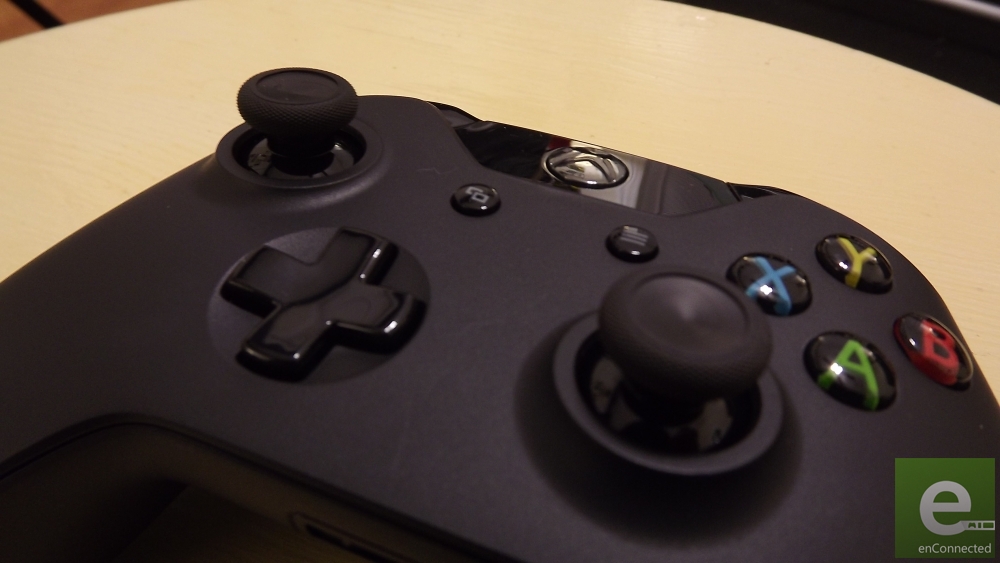 [/one_half] [one_half_last]The Xbox 360 controller was such a marvel that I originally thought there was no way Microsoft could ruin in with upgrades. I was wrong.

To be clear, the Xbox One controller includes revamped buttons, and a d-pad that are perfectly comfortable to use. Each controller is also equipped with a sort of omni-directional rumble technology that allows game makers to program different sensations. Though I appreciate those features — particularly Microsoft’s decision to add a micro-USB port for future PC use and IR emitters that allow the Kinect 2 to see which user has a particular controller — I still don’t feel like Microsoft made the changes that needed to be made here.

Just when you thought it would be safe to throw away those Duracell batteries comes the Xbox One controller and its lack of a rechargeable battery. Sure, Microsoft has done a lot of work to maintain battery life, but really I don’t care about that as long as I have to spend an extra $24 for a recharging kit or $6 for AA batteries after the in-box Duracell batteries die in next few months.

More than it needing batteries, my biggest problem with the Xbox One controller is that its weight and plastic skin make it feel about as cheap as a PEZ dispenser. Also, the circuit board I can see from the controller’s charging port at certain angles doesn’t exactly instill confidence.

That plastic plus the controller’s new Menu and View buttons always leave me feeling like Microsoft should be working on another controller revision over the next year. I don’t hate it, however I most certainly don’t love it. For once, my feelings aren’t mixed about a piece of Microsoft hardware. I simply don’t like the Xbox One controller.

For once, my feelings aren’t mixed…

Once I’d pieced all the components together, I found the Xbox One hardware to be more than capable of replacing the Xbox 360. enConnected will be breaking out most of the functionality into separate articles, so I won’t go into a lot of deal here, but broadly I’m surprised by just how much to the console.

Diving into the Xbox One is like jumping head first into an ocean of ways to distract, amuse and communicate. Madden NFL 25, Forza 5 and Assassin’s Creed 4: Black Flag all played well and looked stunning. (At least Forza 5 did, the others weren’t specifically made for next-generation consoles and don’t really grant Xbox One users any extra in terms of fidelity. 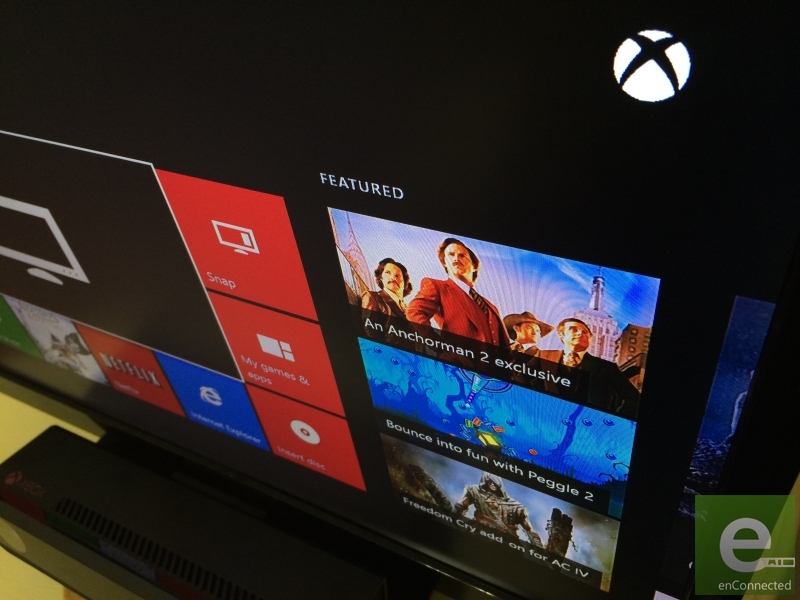 The Xbox One Dashboard

The Xbox One Dashboard is a strange beast. All it once the software that powers the new console is both simple and confusing. Roughly a year after shipping the Xbox 360 update that uses Microsoft’s flat design language, here it is again on the Xbox One. As you might expect, actions and apps are all represented by tiles, though strangely, none of them are really alive with information.

As the Xbox One is based on Windows, Microsoft seems to have borrowed heavily from its Windows products to create the Xbox One Dashboard. For starters, users can customize the color of tiles for their Xbox LIVE account. Users can also pin certain apps. Keeping with that Windows-inspired theme, Microsoft has also broken down all the consoles functionality into bite sized apps. For example, there is an app for everything from Friends to Achievements.

Users can actually Skype call friends and family while playing video games or watching television by snaping apps to the right side of their screen. It’s a bit clunky to figure out though. I’d also like to note that the console’s instant resume functionality makes switching between apps feel natural.

If there’s one thing other Microsoft teams should take away from the Xbox One it’s how not interpret the Metro design language. Sure, the Xbox One’s interface might look just as flat as Windows 8.1, however it’s just as flat and dull as Windows Phone. Whereas the Xbox 360 felt alive and always busy, the Xbox One Dashboard feels like an empty receptacle just waiting for someone to fill it.

Whereas the Xbox 360 felt alive and always busy, the Xbox One Dashboard feels like an empty receptacle just waiting for someone to fill it. 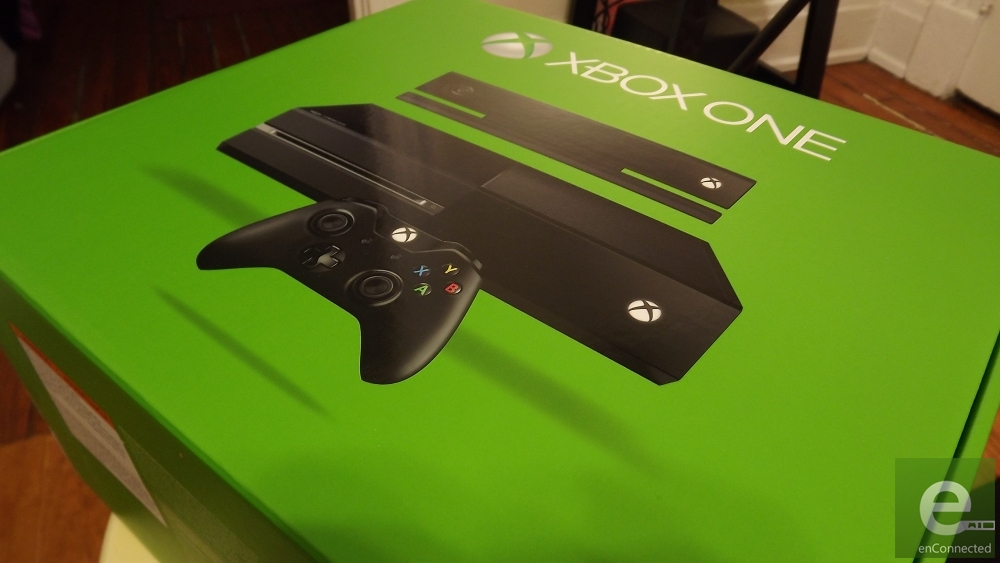 [two_third_last] We’re not going to make you wait for our other more specific pieces before sharing our recommendation. The Xbox One does what it says it does, and if you’re looking to play games, watch television shows, stream from Netflix or chat with friend through Skype, it’s the purchase to make.

Don’t get me wrong, you shouldn’t take the purchase lightly, and we’re certainly going to elaborate on the software, gaming and television aspects of the console soon. But if you want this functionality you don’t necessarily have to wait for those details. Get out that $499 and buy now, the Xbox One is the only console that includes such a potent mix of entertainment mediums.[/two_third_last]

The Xbox One is a huge sea change for longtime Xbox fans and users of Microsoft products in general. As such we thought that it would be better if we took a look at the Xbox One hardware and experience equation in separate parts. As such, you’ll see a host of Xbox One related content for the next few months. Don’t worry – you won’t have to hunt down each post. Instead, we’ll link them all here as they become available. Please note that the review score here reflects the Xbox One experience as it is today.

This review was completed with hardware provided by Microsoft. That had no effect on our findings, however it’s worth noting just the same.

The Xbox One is futuristic device mired in today's problems. Decent games and cool game experiences are aplenty, and the Xbox OneGuide and television integration are seamless. Still, the Xbox One's Dashboard feels like it needs another round of big updates. Buy it for the games, buy it for the live television, buy it because you want to share your faming experiences with the entire family.
Get It Now
Learn more about The en policy on affiliate links.