I can’t remember the first time I heard a media critic or television personality talk about television lovers cutting the cord. I can remember planning to move to my first apartment and deciding I wouldn’t get cable. To be clear, this wasn’t some self-righteous decision to be different or lead the charge in some direction. I couldn’t afford the extra expense. Now I sit here, able to stream live television across the internet directly to my television using Sling TV on Xbox One.

For years I made do with two services that were in their infancy when I got my place: Netflix and Hulu Plus. Then I picked up my Xbox One and signed up for a cable subscription with Comcast because it would only cost me about ten dollars extra. It’s with this mindset that I approached Sling TV on Xbox One. I wasn’t wondering whether I could supplement my Netflix habit with Sling TV. I wanted to try completely replacing my Comcast television subscription with the service.

Sling TV mostly works like any other video subscription service you’ve tried. For Xbox One users there are two parts to the service: an app that you download from the Xbox Store and an account that gives you access to the service on any device.

$20 a month gets Xbox One owners what Sling refers to as an Essentials Pack. A few of the most popular channels from my cable subscription are in this package. ESPN, ESPN 2, AMC, Foot Network, HGTV, IFC, TNT, Travel, Adult Swim, Cartoon Network, Disney Channel, CNN and ABC Family are present, for example.

In addition to that base set of channels, Xbox One owners can add different channel packs. These packs are based on taste. Sports Extra adds ESPN U, ESPN SEC, ESPN News, ESPN Goal Line, UnivisionTDN ESPN Goal Line and Universal Sports. Picking up Kids Extra gets you Boomerang, Disney Junior, Disney XD, BabyTV and DuckTV. (No you didn’t read those last two wrong. You can’t imagine the stuff they show. Not that I watched it or anything.) Lifestyle Extra, World News Extra and Hollywood Extra add even more channels. Subscribers are free to add packs of channels or cancel their subscription whenever they want, but if there’s a single catch with the service it’s that these packs are bolt ons to that basic $20 package and cost you an extra $5 each.

The are Sling TV apps for the iPhone, Android, Windows PCs, Macs and a web client.

I downloaded the Sling TV on Xbox One app the first day it was available. Signing up for the service was tedious — anything that requires you to enter your credit card information with just a wireless controller always is. After I entered my account information and decided on some channel packages I was off to experience the app and service on my own.

Sling TV on Xbox One obeys the laws of Xbox One apps. You can interact with the app using your voice, an Xbox One Media Remote or an Xbox One Wireless Controller. What Sling calls the Mini Guide pops-ups from the bottom of the screen, telling you what’s on each channel at that time. With a few button presses you can break down the channel line-up into different categories. You’ll need to look around for it, but there’s some on-demand content included with each channel too.

Within the last few months Microsoft updated the Xbox OneGuide to support what it calls Internet TV apps. These apps basically allow livestreams directly into the Xbox One’s OneGuide. When an app has Internet TV integration on Xbox One, users can see what’s airing on those internet channels just like they can with broadcast television or something from their cable operator.

What Sling calls the Mini Guide pops-ups from the bottom of the screen, telling you what’s on each channel at that time. With a few button presses you can break down the channel line-up into different categories. 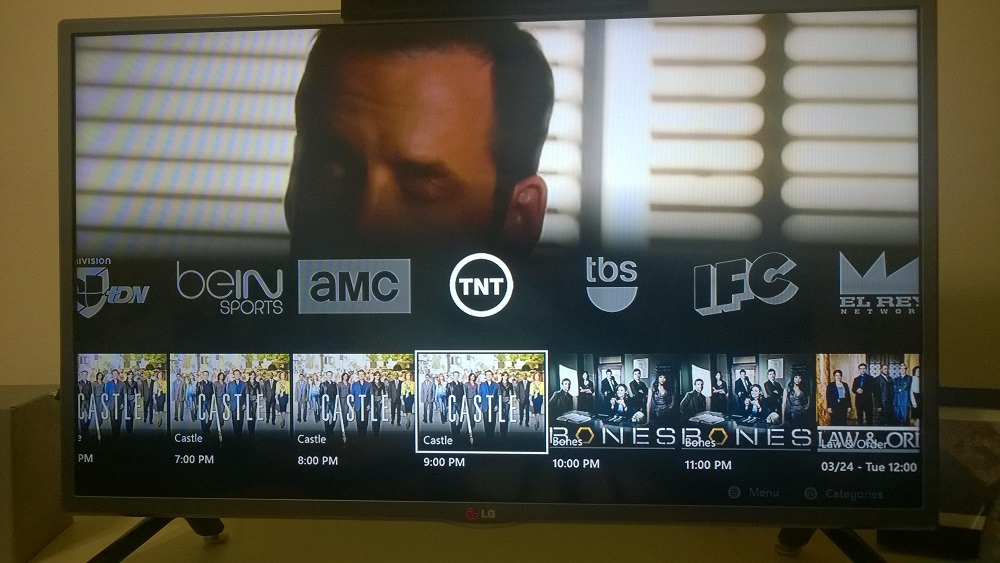 I bring up Internet TV integration because it’s innovative and seems like something that should be included in the Sling TV on Xbox One. Sadly it isn’t, and that absence of Internet TV support means you are left to rely on the somewhat janky internal Sling TV mini guide.

Not since that very first night have I had an issue with Sling TV on Xbox One not loading a channel. Switching between streams isn’t as quick as I’d like it to be, but at least reliable. When you first select a channel the stream starts fuzzy because the app is slowly testing your connection and improving video quality. Quality tended to drop during peak Internet usage hours, which I suspect has something to do with my cable operator making trouble by throttling my internet connection.

It took a few days before I started to miss some of my favorite channels, and ironically that channel is PBS, which Sling TV doesn’t offer just yet. I should note that NBC Universal and Viacom channels are also missing from the lineup, but how often do you feel like rewatching last season of Catfish or the once actually good Suits.

Honestly, the only thing that really bothered me with the app itself was how terrible the Mini Guide is. I went days before noticing any on-demand content. Kinect Voice command integration went about as far as yelling “Mini Guide,” and “Item 2.” If you’re like me and are spoiled by the OneGuide for live television, you’ll ask yourself “where’s the beef?” 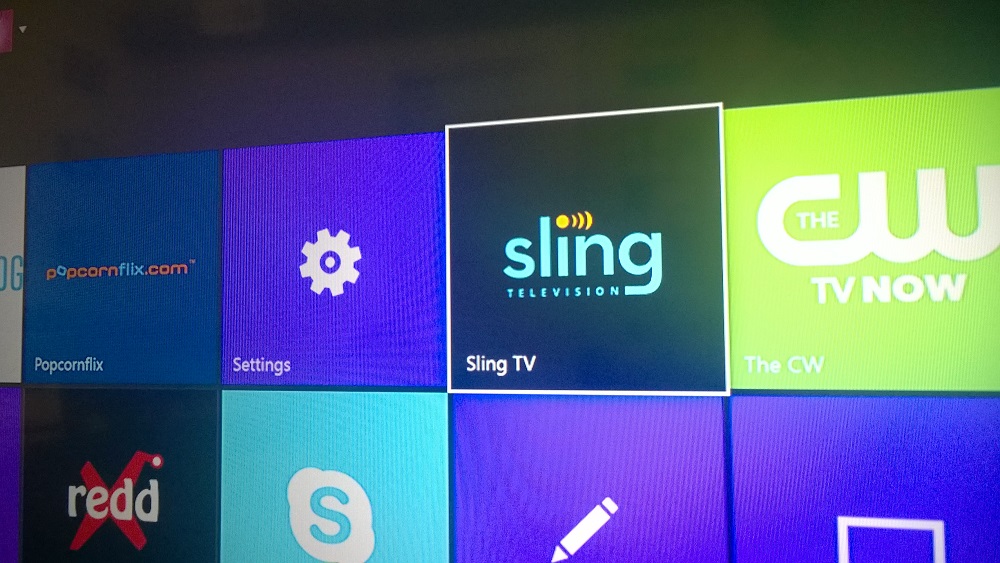 Overall, I’m impressed by Sling TV. The true test for a service and app like his is whether it saves real people real money and I think it does — under certain situations. $20 a month or even $25 a month is great when you’re fine with the channels in the base and a single add-on package. Get all the add-on packages and it adds up very, very quickly. If you count the internet connection you’ll still need to stream the service I sort of feel like it’s a wash. Sure, you’re gaining more control over your television experience — provided you don’t like more than two channels from two separate add-on packs. So yes, Sling TV saves real people, real money, but I’m not sure the service is the silver bullet cable cutters were hoping for. My internet service provider charges $60 for internet and I’d need all the Sling TV packages to get something close to what I have now at a cost of $40 a month. Right now I’m getting internet plus a lot more channels for $110.

As for Sling TV on Xbox One, Sling needs to do better. That Internet TV integration for the OneGuide needs to be there. Even if that never arrives, the guide for finding out what’s on is pretty lackluster.

I do think Sling TV could be a contender one day, and it’s certainly cool for anyone who doesn’t have cable already. Sling TV pricing just needs a little work.

| Sling TV on Xbox One Review 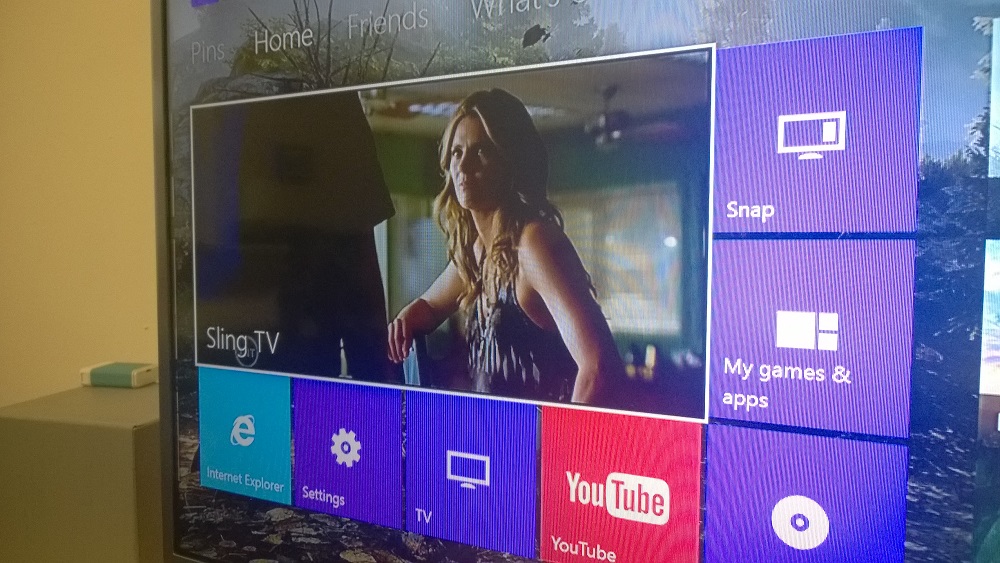 Sling TV on Xbox One could be revolutionary, but it needs some major work.
Get It Now
Learn more about The en policy on affiliate links.