The world of technology is populated by black boxes and slick brushed metal. One of the few exceptions to this rule is video game consoles. Meant to disappear into your setup, they’re almost always black and rather dull looking. With everyone buying all the same things, it’s hard to feel like an individual, like you purchased something cool and made it your own. Xbox Design Lab controllers are the answer to what ails us. At the website turned digital boutique, you can customize the current version of the Xbox Wireless Controller.

Xbox Design Lab is how people without a mountain of money to spend get a custom colored controller to go with their Gamertag and their taste.

Creating & Getting Your Controller

It’s important to put Xbox Design Lab controllers into context. Controller skins exist. Gaming has long offered users willing to spend a decent amount of cash the option to customize their gamepad through a service too. Colorware lets people send in a controller they already own or order a brand new one with a paint job and graphics that they choose. Problem is, Colorware has never been cheap. Add coloring and engraving and you’re looking at about $115 before taxes. 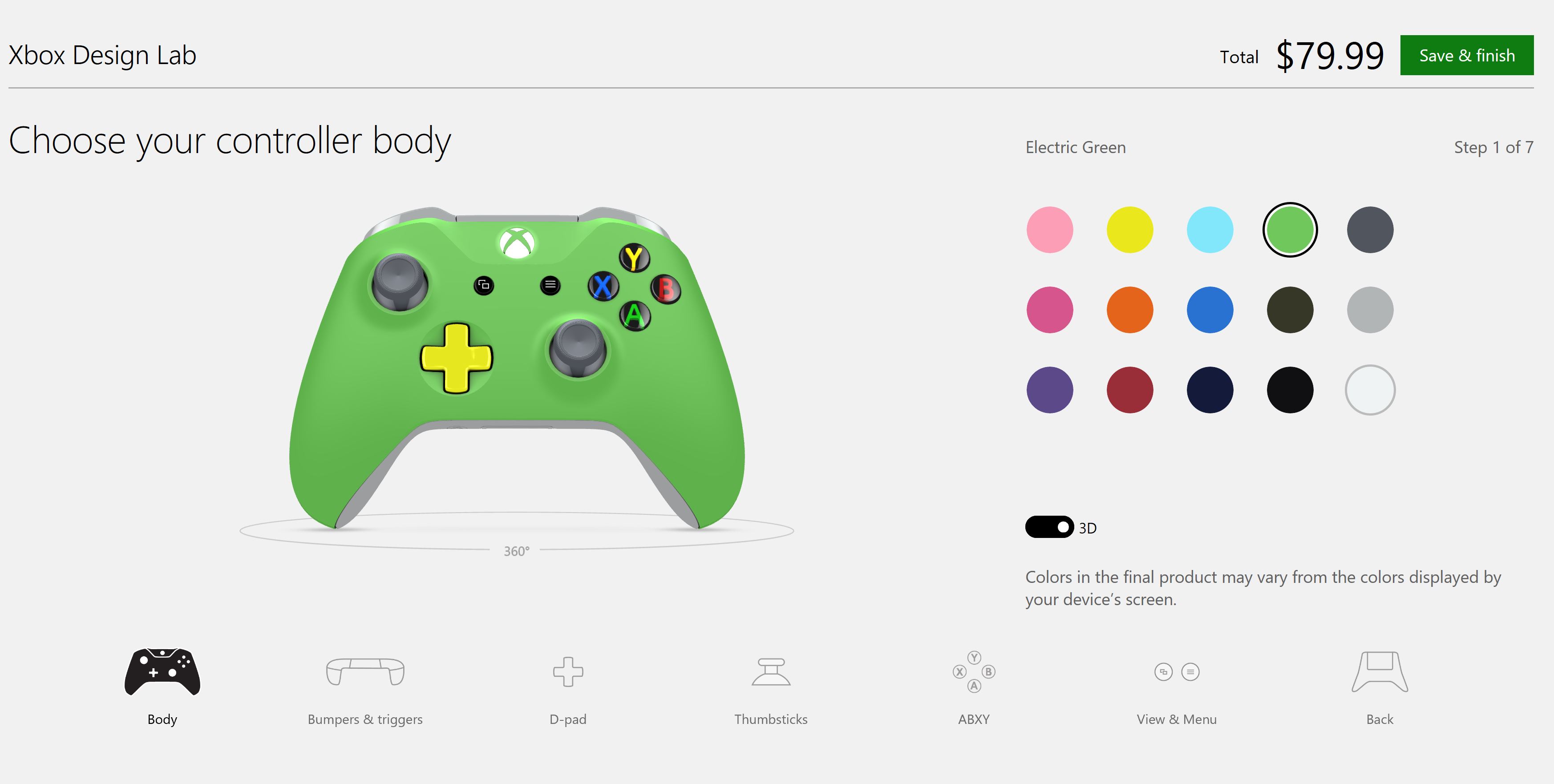 What Xbox Design Lab attempts to do is recreate the excitement of ordering a custom pair Lebron James Solider 10s – my personal shoe of choice – on NikeID. All the while, making it easier and cheaper. Xbox Design Lab controllers start at $79.99. They are that price no matter what color combinations you choose. You don’t need to send your controller in either.

A gallery lets you choose between pre-created color combinations, or get the ones that other Xbox One owners have already made. Microsoft divides the creative process up into small bites so that users don’t get overwhelmed. There are seven different zones that can be customized with different colors, though some of them don’t allow for a ton differentiation. The face of your controller can be one of fifteen different colors. Menu and View buttons can only be one of four.

The web app guides you through the entire process step by step. You can choose to buy your design or save it for later and create another. The creation part of the process is logical and effortless. You pay for your controller through the Microsoft Store website. Then you wait.

Microsoft aims for a 14 day turn around and from what I hear, they manage to do just that. My controller was among the first batch that they made, so my wait time was a bit different. The controller arrives in all white box that opens from the top. It’s as if Microsoft expects someone to propose to their significant other with an engraved “Will you marry me?” Or they know that people will put the controller on display. Hopefully, it’s both.

The Xbox Design Lab controller is based on the Xbox One S controller, meaning you’re getting Microsoft’s latest hardware upgrades. Microsoft has improved wireless reception and added support for Bluetooth. It’s also flattened the design and added some texture to a portion of the controller that digs into your palms.

One thing that it doesn’t do is improve your gameplay. It’s not like the Xbox Elite Wireless Controller, which ironically doesn’t have Bluetooth and can’t be customized. 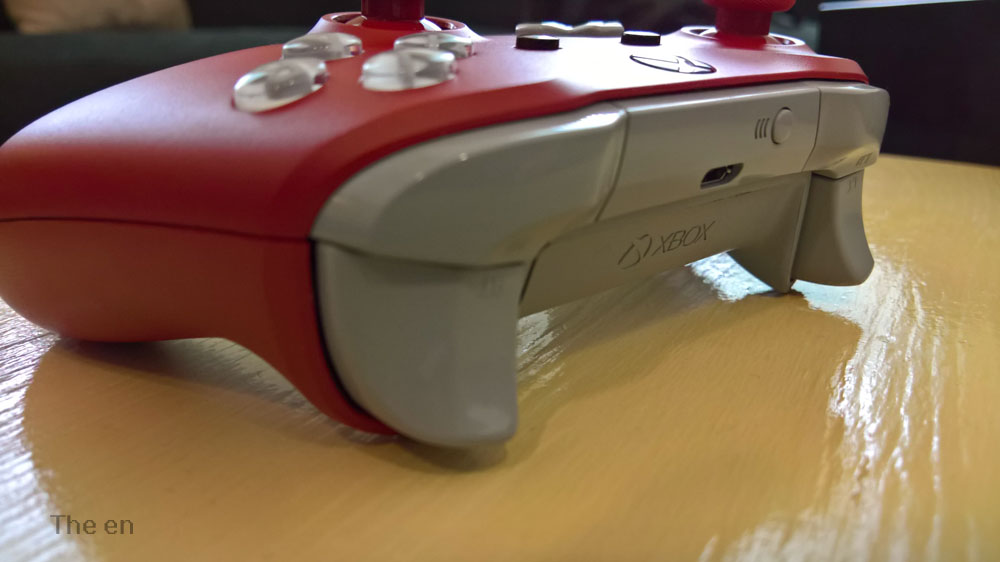 Microsoft has workers that put every colored piece of the controller in place. As such, the hardware itself isn’t painted. What’s red is actually red, despite scratching and scuffing. You connect the controller as you would any other controller and it’s ready to use. 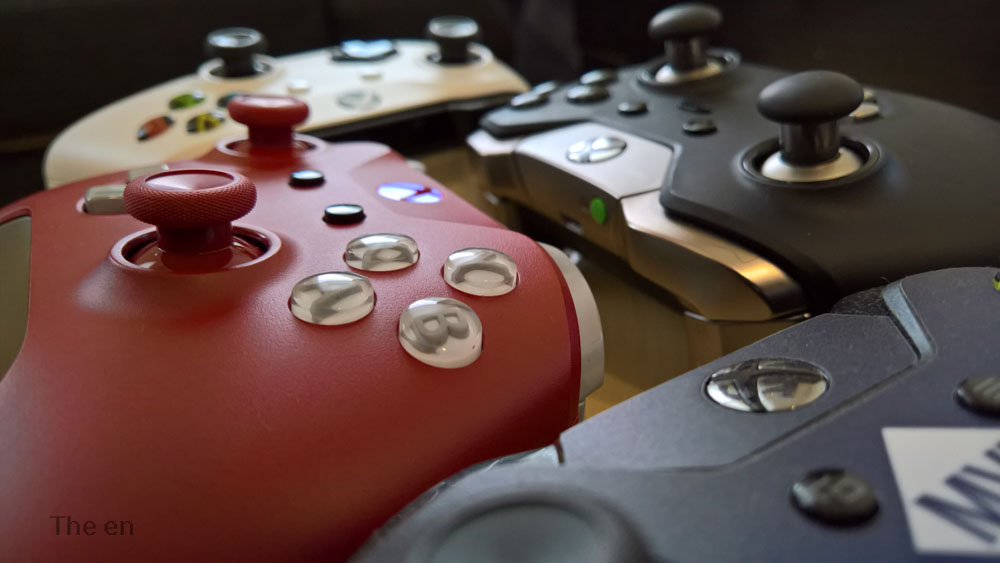 You don’t need to have a custom controller just like you don’t need high-dollar suit from Men’s Warehouse. That isn’t to say that you shouldn’t want either one. In a sea of sameness, it’s fun to have the unexpected, to look at a device that you spend hours with each week and think to yourself “I made that.”

Xbox Design Lab has two-week turnarounds, millions of colors and is pretty straightforward. The controller that you get is high-quality and has the latest features.

You’re going to like the controller you make. I guarantee it. 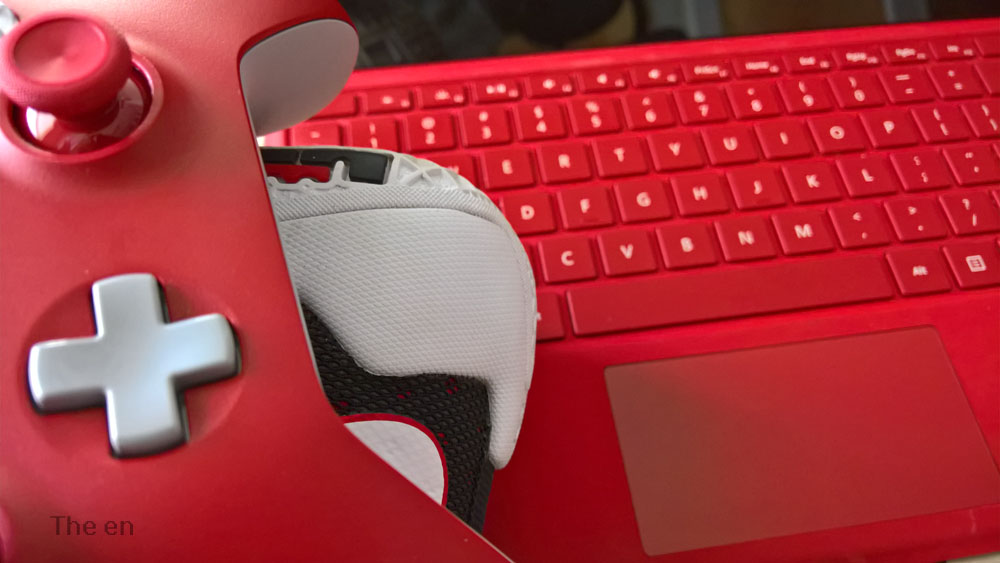 Make it your own with Xbox Design Lab. You'll be pleased with the process and the results.
Get It Now
Learn more about The en policy on affiliate links.