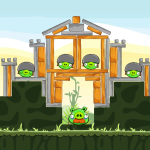 Today, the official Windows Phone blog announced that the “Must-Have Games” for Windows Phone 7 will be released on a weekly basis starting next week (May 25). The news is phenomenal for those of us looking for great, fun, high-quality games on our WP7 handsets; but it brings with it a bit of a major disappointment, as well.

During the MIX11 conference last month, it was reportedly announced (I didn’t watch the keynotes) that Angry Birds would be released for the platform on May 25. Every article I read on the subject reported it that way, and the official Windows Phone Support Twitter account apparently thought so, too. Sadly, Angry Birds is actually the last of the 6 “must-have” games that will be released; not seeing its debut on the platform until June 29.

Prior to the release of Angry Birds, we will see the following games released, one each week until Angry Birds hits the marketplace.

You can see some screen shots, read more about each game and check out the prices that will be attached to each by heading on over to the Windows Team blog entry I mentioned above.

Have you played any of these games on other platforms? What did you think? Which ones will you be picking up?

HTC Trophy Coming to Verizon on May 26