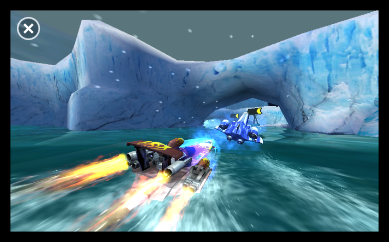 This week saw the release of the first “must have” game on the Windows Phone 7 platform. The game is Hydro Thunder Go, a fast-paced racing game that puts you in the driver’s seat of a speedboat instead of the traditional racecar. Hydro Thunder itself should be a fairly well-known franchise at this point, having made its non-arcade debut on the Sega Dreamcast and then released in various forms for the N64, Gamecube, Playstation, PS2 and Xbox 360.

As far as I can tell (presumably since the game is owned and distributed by Microsoft), this game is a Windows Phone exclusive. This is not a port of an existing iPhone or Android app; this is a completely original game made strictly for WP7.

For purposes of this review, I’ve only played the trial version of the game. This is not a comprehensive review of the entire game, just some quick observations. In addition, since I only own an HTC Surround, I can only review the way the game performs on that device; I can’t comment on any variations you might find with your device.

The controls for this game are near perfect. It makes phenomenal use of the accelerometer built into the phone. With a lot of games that rely on the accelerometer, the controls tend to be either too touchy (a tiny little bump sends you careening off into another world) or not nearly sensitive enough (you have to virtually twist your arms out of socket just to get the game to move a tiny bit to the left or right).

This game, though, seems to have the controls dead-on. Twisting the device left or right to control your boat feels very natural.

There are basically only four controls to worry about in the game.

If you’re a fan of the original Hydro Thunder games, you should feel right at home with this title. It plays almost exactly the same as I remember the classic Dreamcast game.

Fans of most racing games should enjoy this title. It gives a new twist (well, it was new in 1999; it’s still fairly original compared to most other racing games) to the classic racing concept. Similarly to the way the Twisted Metal series did, the Hydro Thunder series turns the racing genre on its head (imagine how much fun a crossover between Twisted Metal and Hydro Thunder would be).

The really nice thing about this game (for me, at least) is that it can be played in short bursts. Got 5 minutes to waste? Run a level on Hydro Thunder. Start it up, play a course and then get on with your life until the next time.

While the game would probably look terrible on a 42″ HDTV, it looks awesome on the crisp, clear display of my HTC Surround. The colors are vibrant, the graphics are clean and the motion is smooth. This is an extremely well-done game.

I can’t tell you what you should do, but I will absolutely be buying the full version of this game. This will be a great time-filler for me, and it’s a blast to play.

Because this game offers a free trial version (one boat, one level), you should definitely try that out before buying the full version; but I suspect you’ll be pretty impressed. 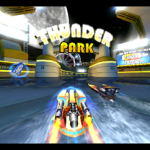 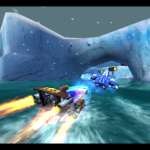 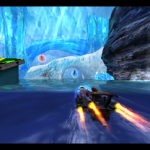 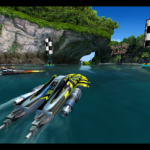 Review: Hulu Plus for Xbox 360