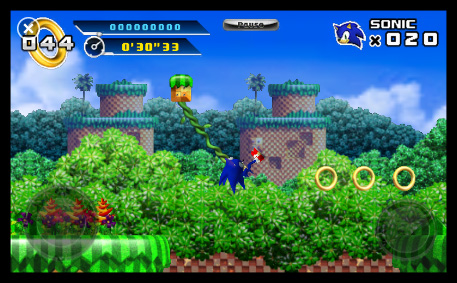 This past week saw the release of the much-anticipated Sonic the Hedgehog: Episode 4 for Windows Phone. This is the fourth release in the “Must Have” series on the platform, and it’s an interesting one. It’s only the second Windows Phone 7 release from SEGA (the other being Super Monkey Ball).

The game is nicely done, but has a lot of drawbacks. Is it worth $6.99? That’s a tough call, honestly. Let’s take a look at the game.

The game play itself is awesome. This is a very cool game made in the style of the classic SEGA Genesis/Mega Drive games. In fact, as others have said, it’s more of a “lost levels” game based on the classic series than it is a whole new game. Regardless, if you were a fan of those classic games, you should definitely be a fan of this game.

The game introduces a few elements that weren’t present in the classic 16-bit games (at least, none of the games I played; though I spent the overwhelming majority of my Sonic time playing Sonic 2 on the Genesis). For instance, Sonic now has a homing attack. Pressing the “jump” button twice when there is an enemy, treasure box or smashable rock nearby will send Sonic spiraling directly at the object, destroying it.

The controls are probably as good as they can be on a mobile, touchscreen platform, but that’s definitely not saying they’re good. Sonic is an extremely fast-paced game with quite a bit going on, which makes control extremely difficult when you’re playing on a small screen.

When you start the game, you have two control options to choose from: on-screen d-pad or tilt control. Both control configurations have their pros and cons.

The on-screen d-pad is difficult to use most of the time, because it means your finger (or thumb) has to be touching the screen at all times (causing your hand to obscure a decent portion of the screen while you’re playing). There is a d-pad on the left side of the screen and a “jump” button on the right side of the screen. I also hate the fact that the way the on-screen controls are set up, I end up with some really nasty fingerprints on my screen.

Using the tilt control is nice, as you can view the entire screen the whole time you’re playing, but it tends to make it a little more difficult to jump, and it’s much more difficult to cause Sonic to ball up and perform his spin moves.

It would be kind of nice if there was some way to use both control configurations together at the same time, but I don’t see that option.

The graphics in this game are painstakingly reminiscent of the classic Sonic games. They have a good bit better quality than the old 16-bit games (though the Sonic sprite on the “Loading” screen looks terrible). The Sonic character is much improved over his 16-bit counterpart, and the levels seem to have more color and more detail than before. It’s a fairly polished-looking game.

My main complaint about this game is the fact that it only works with the device turned one way. With the HTC Surround, which has a slide-out speaker (which sits at the top when the device is turned in landscape mode), I tend to turn my phone upside down with the speaker extended, so I have a small shelf on which to rest my palms. Unfortunately, this game only works in the traditional landscape mode, so I don’t have that option.

Another complaint is simply the fact that there is so much going on in the game that it’s difficult to play on such a small screen. Unless you play the game a lot and become familiar with the placement of enemies, chances are pretty good that you’ll get whacked at least once on each level because of an enemy that seemingly appeared out of nowhere.

Finally, the settings for the game (at least on the trial version) don’t save themselves when you exit the game. If you fire up the game and choose the tilt control configuration, or you turn the music and/or sound effects down; the next time you fire up the game, it will default back to using the on-screen d-pad and having the music and sound effects back at 100% volume.

I would definitely recommend downloading and playing the trial version, if for no other reason than just to see Sonic in a new adventure (not totally new, as it was released on some other platforms {PSN, XLA, WiiWare and iOS} about 8 months ago) on your Windows Phone. However, the trial version only includes a single level, so you won’t get to enjoy the game too much without shelling out the $6.99 that’s being asked for the game. At that point, you might be better-served to shell out a few extra bucks and just play it on your Xbox or Wii (it appears to be $15 on WiiWare or 1,200 Microsoft Points on Xbox Live – whatever that translates to).

Honestly, there are few people that are bigger SEGA fanboys than I am. The Genesis was my first home console, and the Dreamcast is still my favorite console of all time. However, that doesn’t mean I am of the opinion that SEGA can do no wrong. Personally, I think it would be much cooler to see a classic game like Sonic Spinball ported to the Windows Phone platform rather than trying to play a fast-paced platform game on the phone. I would also love to see SEGA Columns Deluxe make its way to Windows Phone, as I loved playing that on my old iPhone.

What do you think? Is Sonic 4 worth the purchase price on Windows Phone? Do you find it as difficult to play as I did? 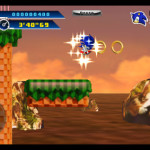 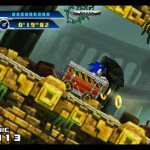 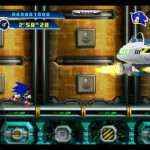 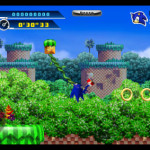