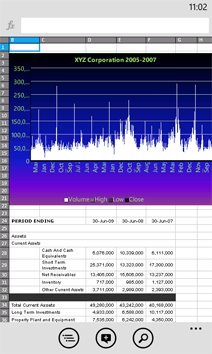 I don’t use Office on my Windows Phone 7 device extremely often, but in the instances that I have, I’ve found two issues that are really frustrating about the current implementation.

Documents that you edit on the phone don’t seem to auto-save in any sort of reliable or consistent manner. Multiple times, I’ve exited a document expecting my work to still be there when I go back to the document later; only to find that my work has reverted back to the way it was weeks or months ago.

It seems that the phone performs some sort of save-state on documents, but it loses those save-states every once in a while (I haven’t nailed down the cause yet; but I suspect it is related to either shutting down the device or manually syncing it).

With the auto-save being so unreliable and inconsistent, you’d expect there to be a noticeable “Save” icon somewhere in the application. If you did expect that (as I did), you’d be wrong. In fact, not only is “Save” not one of the three options represented by icons at the bottom of the application; it (along with the “Save As” option) is actually the last of the options in the pull-up menu (meaning you have to first pull up the menu, then scroll all the way to the bottom of the actions list before you’re able to save). In Word and PowerPoint, it’s not that big of a deal, since there are only three or four options in the pull-up menu; but in Excel, there are 6 menu items above “Save”.

Why, oh why is it not possible to upload and download documents to and from SkyDrive? To make matters worse, viewing documents in your SkyDrive isn’t really even possible from your Windows Phone device (through Office or the browser). You can, apparently, sync documents between your phone and a SharePoint server, but only specific SharePoint servers are supported.

I sincerely hope Microsoft adds SkyDrive support to Office when Mango is released.

Introducing the Fantasy, The Next Windows Phone From LG

2 Comments on “Two Gripes About Office on WP7”