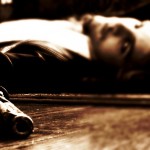 “I look at the world and I see absurdity all around me. People do strange things constantly, to the point that, for the most part, we manage not to see it. That’s why I love coffee shops and public places – I mean, they’re all out there.”  -David Lynch

This episode is all about the surrealist master and all around artistic genius David Lynch.  One of my favorite film-makers, Lynch is also a writer, television director, visual artist, photographer, musician and occasional actor. Over the years he has developed his own unique cinematic style, which has been dubbed “Lynchian”,  which is characterized by dream imagery, meticulous sound design and in many cases shocking and violent elements.
There are several frequently used themes within Lynch’s work, which has earned them the reputation that they “disturb, offend or mystify” their audience.  These themes include the usage of dreams and dreamlike imagery within his works.  Lynch has stated that “Waking dreams are the ones that are important, the ones that come when I’m quietly sitting in a chair, letting my mind wander. When you sleep, you don’t control your dream. I like to dive into a dream world that I’ve made or discovered; a world I choose… right there is the power of cinema.”

Other prominent themes In Lynch’s work are the idea of industry, with repeated imagery of machinery, pistons,  screaming woodmills and the idea of violent criminal activity just beneath the surface of society.  Other imagery commonly used within Lynch’s works are flickering electricity or lights, as well as fire and stages where a singer performs, often surrounded by drapery.

I highly recommend that you try out Twin Peaks, Mulholland Drive, Lost Highway, Inland Empire and of course Dune.