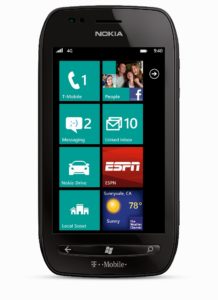 Windows Phone users on T-Mobile USA have had good reasons for feeling left out these last few months. AT&T has consistently delivered some of the best Windows Phone devices for at least two years and what have they gotten? The joke that was the Dell Venue Pro’s ongoing quality issues, the re-badged HTC HD2 being billed as the HTC HD7. Only recently has the magenta carrier improved it’s users fortunes with the well received HTC Radar 4G. Now it’s teaming up with Nokia to launch the Nokia Lumia 710, and to say we’re interested in the budget device’s great screen and decent camera is an understatement.

Starting January 11th, those of you on T-Mobile can pick up a black or white Lumia 710 with 8 GBs of storage, a ClearBlack WVGA scratch-resistant screen, a 5-megapixel camera, and “4G speeds” all for $49.99 after a two-year service agreement and a $50 mail-in-rebate. T Mobile