Yesterday, Twitter released a completely revamped version of their official app for Windows Phone. Today, however, things have started to get a little weird.

As I may have mentioned before, my wife & I both bought HTC 8X devices in late December. She got the 8 gig yellow, and I got the 16 gig blue version. They are on the same AT&T Family Plan.

We both updated to the new Twitter app yesterday. This evening, however, her phone notified her that there was another “update” available for the Twitter app. She updated her phone and found that she had actually been rolled back to the old version.

On my phone, meanwhile, there is no such notification about an “update”.

On her phone, the Marketplace says that the current version is 1.5.1.0, released on Jan. 27, 2013; while my phone’s Marketplace says the current version is 2.0.0.1, released on Feb. 26, 2013. I’m not sure exactly what might be going on, but it is rather strange to see this happen, especially on the heels of the Windows Phone 7.8 update getting pulled from the metaphorical shelves yesterday. This is not a good sign for our beloved platform. 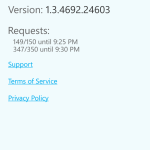 The old Twitter app is installed on my wife’s phone 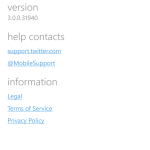 The New Twitter App’s “About” screen on my phone 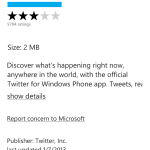 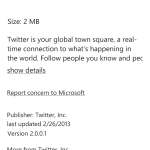 Free Music Friday: Use Stereodose for A Social Music Experience