Way back when Microsoft’s music platform still sported orange and magenta as accent colors instead of green and Xbox Music was still Zune; users had a choice to make. Back then, before Spotify, before the iPod Touch and the Samsung Galaxy S4, there was Zune Music Pass. With it users could download an unlimited amount of songs, listen to them even when they didn’t have an internet connection and share them with their friends through Zune Social. Zune is gone and it’s never coming back, but in its place we have Xbox Music apps and smartphones than run them like the Galaxy S4.

A Music Service By Any Other Name

A Music Service By Any Other Name 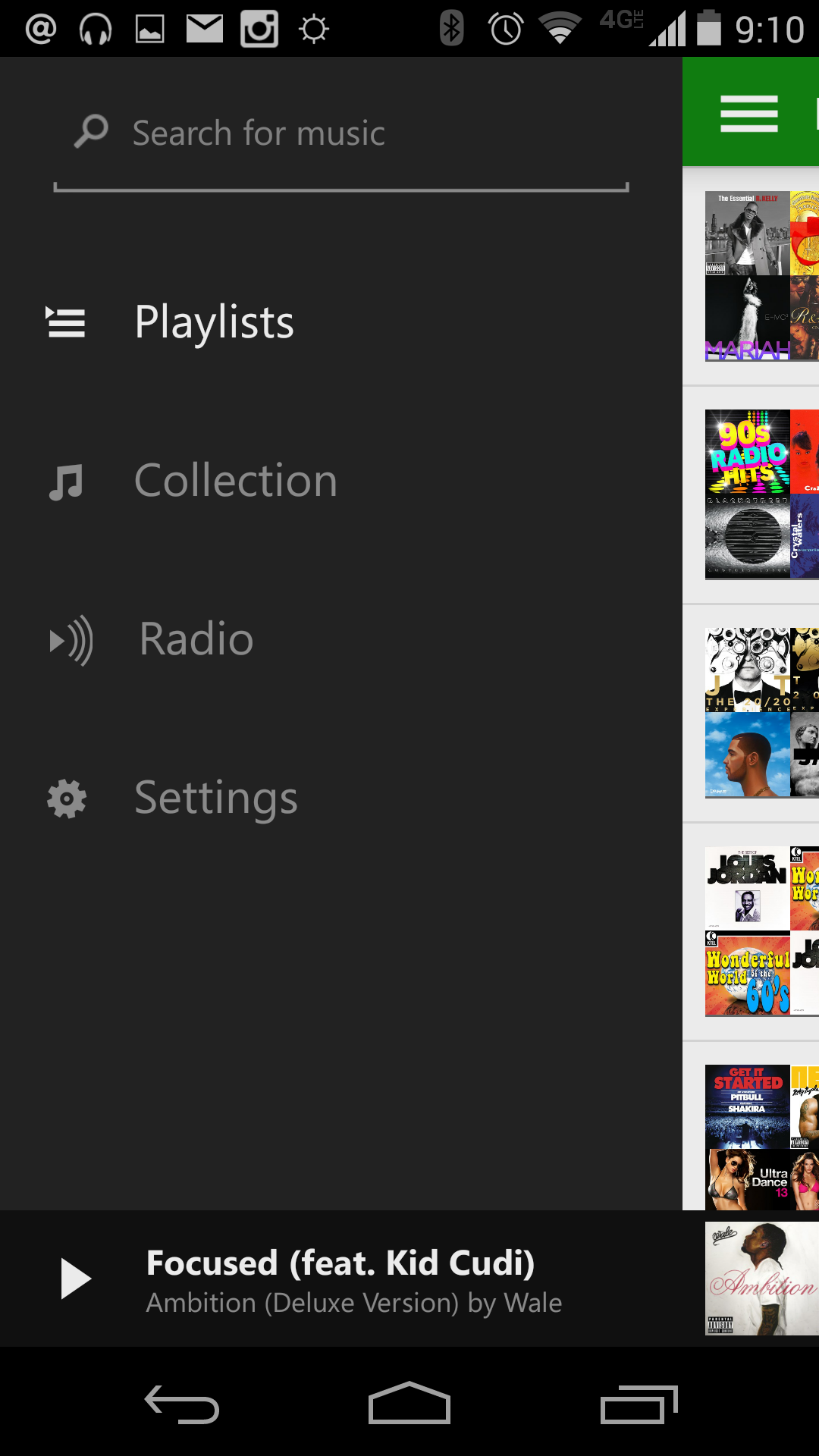 Functionally, Microsoft’s Xbox Music service remains in the same place it was when Microsoft introduced back in 2012 alongside its Windows 8 operating system. By now you know the drill, in exchange for $9.99 a month, Xbox Music allows users to stream songs from its 13 million+ catalog. Those who aren’t big fans of streaming – or are a slave to a data cap – can download songs over Wi-Fi and listen to them when they’re offline. This is virtually the same service that Xbox Music debuted as. There are now free credits like with Zune Music Pass. In fact, there aren’t many extras besides the free music video streaming that Microsoft makes available to subscribers through Xbox Music on Xbox One.

Xbox Music has a lot of different spokes that lead in a lot of different spaces. Including Xbox Music on Android, there are clients for the iPhone, Windows Phone, Windows PCs and the web. Joining those are two other clients – one for Microsoft’s own Xbox One consoles and another for the Xbox 360. Whereas its forbearer, Zune, took a traditional approach to syncing, Xbox Music syncs the same library across devices. It also recognizes the music users already own and makes that available to them across the service’s many apps or what Microsoft refers to as tuners.

Xbox Music is a typical modern subscription music service. That’s it. There are no frills to be had and no exclusive features to appreciate beyond being available on the Xbox One. My hope is that changes at some point.

There are no frills to be had and no exclusive features to appreciate beyond being available on the Xbox One.

When you first sign into Xbox Music on Android you’re greeted by a breakdown of what the service does and asked to sign into the app with your Microsoft Account.

Once you’re signed in that’s when the fun begins. Had Xbox Music scan the music you own on your Windows 8 PC? Cloud versions of those songs are available in what Microsoft calls your “collection.” Any songs you’ve purchased through Xbox Music on any device are already included in that cloud collection.

Whenever Xbox Music on Android is freshly launched, users get a look at all the playlists they’ve ever created on the service. These too are synced by the service in the background. Screens for Collection, Playlists and Settings are joined by a browser for Radio, the part of Microsoft’s music service that used to be called Smart DJ. Radio playlists are recommended and also synced across the different parts of the service. Radio playlists are like flowers, you start with the seed – in most cases a song or artist – then branch out to musicians and songs you may have never heard before.

Collection view is divided in between Artists, Albums, Songs and Genres. You switch between each with a navigation bar that now stays at the top of your screen thanks to a recent update. Tapping on an artist gets you a list of their albums, songs and their biography. There’s a button to create a radio playlist and tapping on any album art work instantly starts that album.

It’s all very tidy and neat. The app works, and includes all the necessary extras. A small widget allows you to control playback from the Android home screen. Album art is surfaced to your Android device’s locks screen. Playback controls work too. 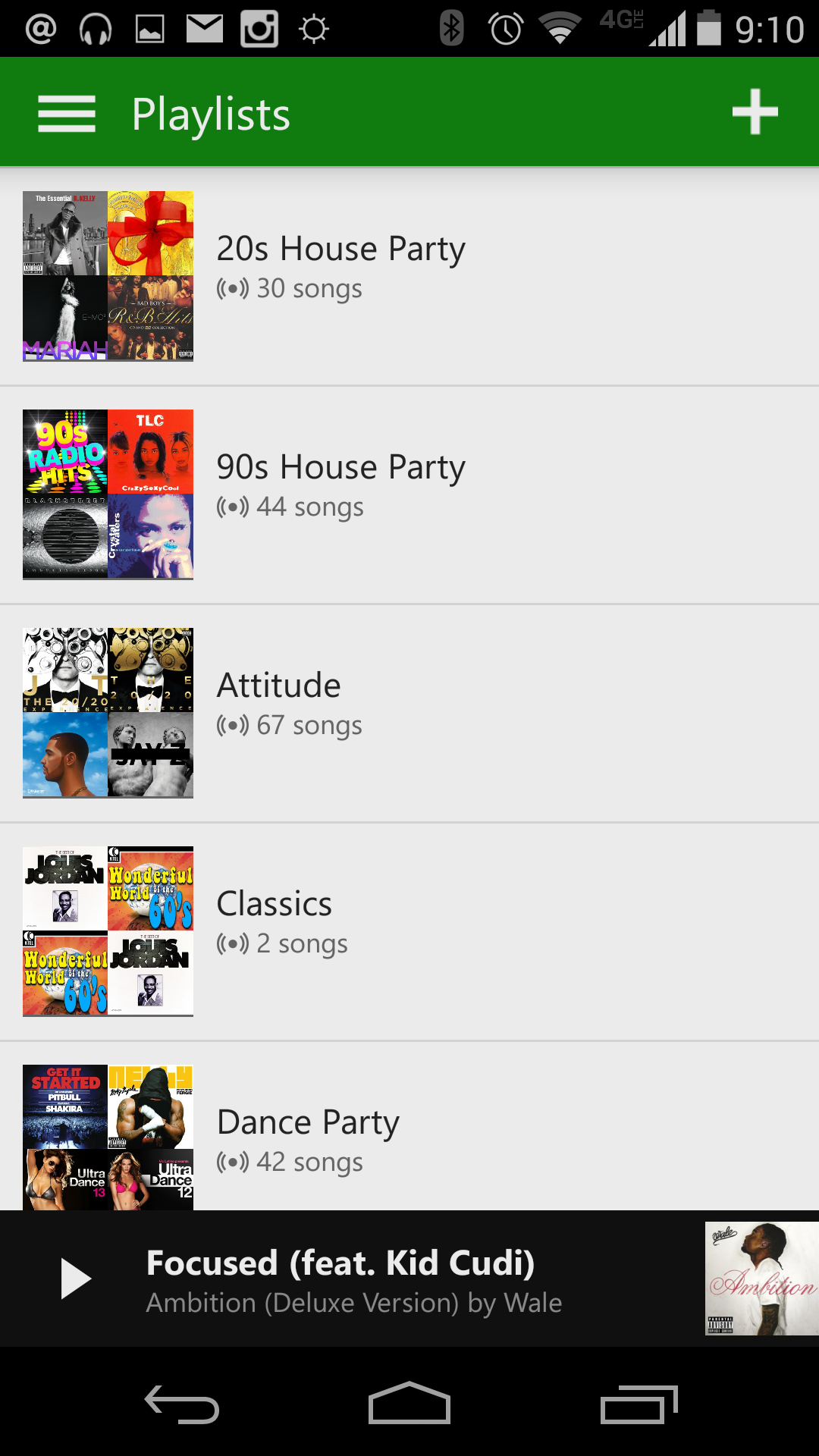 $9.99 a month doesn’t get Xbox Music on Android subscribers much.

With all of that functionality, you’d think it’d be pretty hard to not like Xbox Music on Android. It’s pretty easy actually and the devil is in the details.

Let’s start with the on-boarding experience. With the Xbox Music on iPhone review I noted that there’s no actual way to sign up for the service through the app. In that app’s case, it makes sense. Apple requires companies to fork over 30% of their earnings for apps with included sign ups. As far I know, Google has no such restriction, leaving me to ask why Microsoft doesn’t let users sign up for the service through Xbox Music on Android. No normal person is going to be happy with needing a web browser or a console to sign up for a music service.. Also, Xbox Music doesn’t actually see the music you have stored on your phone. Again, prohibited on iPhone, but completely possible on Android.

The experience just gets worse though. The most basic thing a subscription app can do is allow you to browse for new music. Spotify includes a Browse tab with tons of playlists, access to new releases and ways to track what your friends are listening to.

If you wanna shuffle all those songs you have in your collection? Tap Songs, Tap Play All Songs then wait for the Now Playing screen to play the first song in your collection like it does every time. Now tap the shuffle button. Again, I’m not joking. Xbox Music for Android’s Now Playing screen is plain and boring. A few choice upgrades this past week added the convenient and ever-present collection navigation and an easy way to browse between different letters. It’s nice being able to download individual songs and playlists now too – even though you still can’t download your entire collection to Xbox Music on Android. 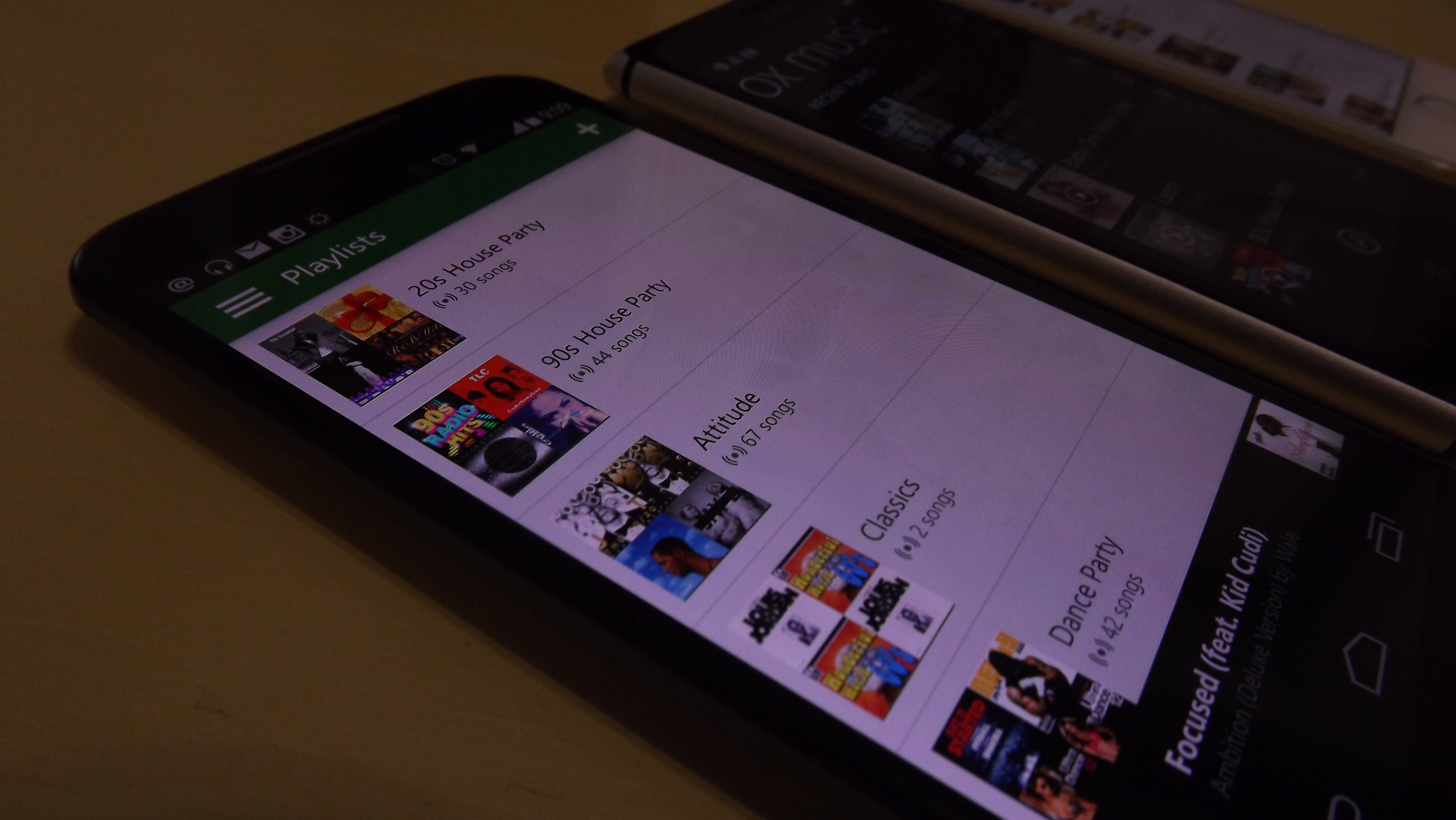 The service itself is way too scattershot. Not being able to browse the store itself is pure and utter crazy. That you can’t even purchase songs directly from the app is even more ridiculous. Two years after Microsoft first released Xbox Music and almost a year after Xbox Music on Android arrived, I’m ready to say it: Xbox Music no longer gets a pass for just being substandard. 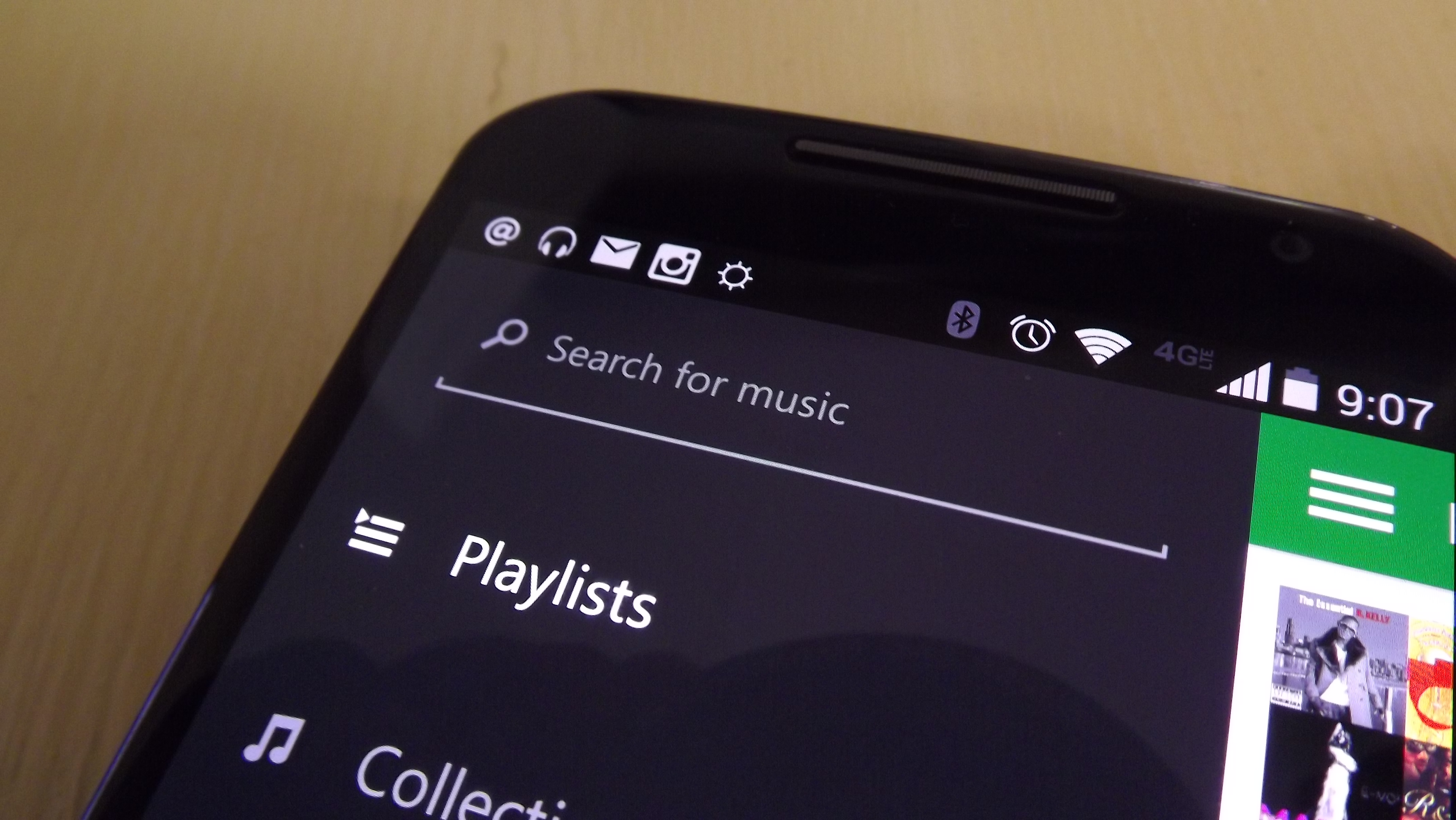 All at once I'm hesitant to say Xbox Music is great. Compared to other Android music apps there's very little there. To make matters worse, the app has only shown signs of life in the last few weeks. If you have en Xbox go for it. Otherwise I'd hold off.
Get It Now
Learn more about The en policy on affiliate links.