And that’s how my journey to replacing my Samsung Galaxy S8+ with an Apple Watch began. Last fall I dumped my 2017 Surface Pro — in part because I got sick of the complexities of Windows. With it gone, I was free to think about what would work best for my needs.

Turned out what worked best was an Apple Watch Series 4 with Cellular connectivity. I just didn’t do much more than text, read emails, listen to music and control my home using the Galaxy S8+. I browse the internet, read books, and write pieces on the 12.9-inch iPad Pro that’s almost always with me, so why was a carrying around this separate device I needed to manage and charge in addition to a Galaxy S3 Frontier with LTE and barely any apps?

I purchased the Apple Watch three weeks ago. If there’s an alert from my security cameras, it comes to the watch. I reply to emails, text messages and take phone calls directly from my wrist and a pair of Samsung Gear Icon X 2018 headphones. I listen to music, turn on lights, pull up passwords, pay for food, and change my home thermostat’s temperature on the Apple Watch. OneNote and Enpass, the two most important apps I install on any device, are both available on Apple Watch too. Most days I have zero reasons to ever touch a phone. 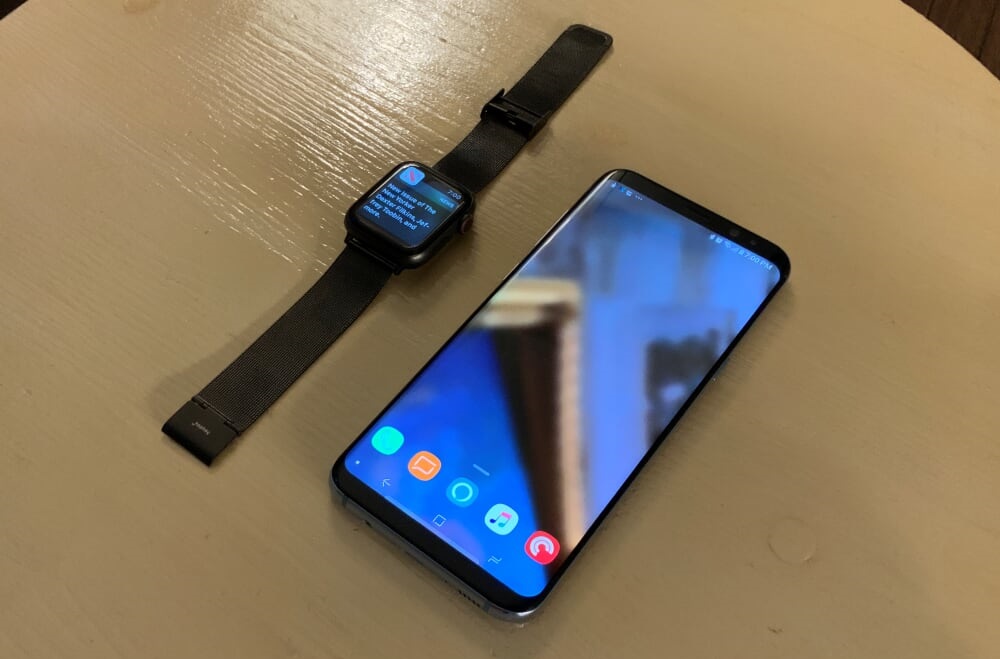 On days when I need more capability than the Apple Watch can provide (it doesn’t have a camera), I carry an old iPhone 7 I keep locked in a drawer at home and communicating with my Apple Watch anyway. That way, I have access to a camera if I should ever need one, which I never do.

Now I’m not saying everyone should go out and buy an Apple Watch. You obviously can’t read books on one, and I certainly don’t recommend ditching half your music collection just to fit all your favorite songs on the 16GB of storage it has inside. I have to charge it once a day, and I can’t listen to any music or podcasts through its built-in speakers, only my headphones. (Not that I’d make a habit of blasting Post Malone loudly in public spaces anyway. I’m not that guy and you shouldn’t be that guy or gal either.)

I am saying that it’s okay to ask yourself if you really need all the stuff you think you do. I’m saying that if you’re someone hoping to do less with less stuff, smartwatches aren’t the worst idea someone ever cooked up.

And finally, I’m saying that you haven’t lived until you can leave for work in the morning with just some headphones and a car key in your pocket, drive twelve miles feeling like you forgot something, then arrive at work and realize everything you need is either in your tablet/work PC or on your wrist.